In the late 1960s and early 1970s, the moon was a focus of much interest in the US and the erstwhile USSR. But that politico-scientific Cold War is a thing of the past. And the near future, scientists and t v jayan believe, will herald the true golden age of lunar science 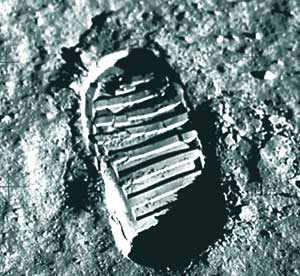 Apart from discussing the preliminary results from smart-i -- acronym for the first Small Missions for Advanced Research in Technology, a lunar mission recently launched by the European Space Agency (esa) -- the sixth edition of the International Conference on Exploration and Utilisation of the Moon had China, India and Japan providing more than a peep into their proposed lunar missions.

They also briefly discussed the possibility of setting up a robotic village on the moon from 2010. "The idea behind the contemplated robotic village is to firm up navigation and communication technologies required for deep space exploration," said Bernaud Foing, executive director of International Lunar Working Group, a public forum supported by national space agencies. Foing is also the chief scientist with esa. He hoped all countries that were currently running a lunar programme would get together and co-operate in this endeavour.

The moon was first visited by the Soviet spacecraft Luna 2 in 1959. Till date, it remains the only extra-terrestrial body to have been visited by humans. The first landing on the moon was on July 20, 1969 and the last in December 1972. The moon is also the only extra-terrestrial body from which samples have been returned to Earth. In the summer of 1994, it was very extensively mapped by the tiny spacecraft Clementine and again in 1998 by Lunar Prospector.

Compared to the 1960s and early 1970s that witnessed a usa versus Soviet Union rat race to establishing supremacy over moon exploration, the 1980s and 1990s were quiet on the lunar front. By this time, the Soviet Union had broken up: for the us, there was no longer any need to tom-tom its superiority -- political as well as scientific -- in the field of lunar explorations and so it shifted attention to Mars.

The only exception was the Lunar Prospector, launched in 1998. It was the First National Aeronautics and Space Administration (nasa) mission to the moon in almost 30 years. Similarly, Clementine -- jointly developed by the us Department of Defense and nasa, and originally conceived as a flyby to the asteroid Geographos -- indicated there could be water-ice on the moon.

Then in August 2004, esa launched its first lunar orbiter smart-i, inaugurating what lunar scientists like to call the "a golden age of lunar exploration". smart-i, which entered the lunar orbit on November 15 this year, uses a revolutionary solar-electric propulsion system. Also called the ion-propulsion system, it converts solar power into electricity which, in turn, charges atoms of the heavy inert gas xenon. These charged atoms, known as ions, are then ejected from the back of the probe to provide it the necessary thrust.

Aboard smart-i are several instruments: an x-ray spectrometer which will analyse the chemical-elemental composition of the lunar environment, a high-resolution camera to take pictures of the moon's surface as well as Earth from space and a near-infrared spectrometer to analyse minerals.

The years to come are expected to be exciting for lunar enthusiasts and scientists, for as many as six spacecraft are to go on fact-finding missions between 2006 and 2010. What's also significant is that three aspiring Asian space-powers -- China, India and Japan -- will join the race. All three have drawn up plans to send unmanned missions between 2006 and 2008. Japan's lunar orbiter Selene- a will be the first to lift off the launch pad early 2006, closely followed by the Chinese mission, Chang'e. India's Chandrayaan- i will be last off the block; its launch is scheduled for either 2007 or 2008. Another Japanese mission -- Lunar- a -- was originally planned for 2004. Intended to explore the interior of the moon, it didn't take off and is yet to be rescheduled.

Similarly, the us is planning a mission called Moonrise in 2010. It will land two stationary robots at the moon's South Pole Aitken Basin -- 2,500 kilometres wide and 13 km deep, it was first discovered during nasa 's Galileo mission to Jupiter -- and is expected to yield information about the lunar interior, which holds clues to the early history of the moon.


How did Earth come about acquiring such a large satellite, which resembles the composition of the earth's mantle? It remains a mystery, but in the pre-Apollo days, scientists had come up with three principal theories. The theory of co-accretion asserted the moon and Earth formed at the same time from the Solar Nebula (just like some satellites of Jupiter, Saturn and Uranus); fission, which holds that the moon split off from the Earth; and capture, according to which the moon formed elsewhere and was subsequently captured byEarth (similar examples are Phobos and Deimos, recently-discovered satellites of Mars). Today, based on analysis of rock samples brought back by different lunar missions -- a total of 382 kg of rock samples were returned to Earth by the Apollo and Luna (Soviet Union) programmes -- all three have been rejected. Co-accretion, for instance, was ruled out, says Narenda Bandari of the Ahmedabad-based Physical Research laboratory (prl), because Earth and the moon do not have the same bulk composition. Also, a large number of elements found on the surface of both plantery bodies were the same, discounting the possibility the moon was captured by Earth.

But one hypothesis that became widely acceptable to scientists was proposed by A G W Cameron, a Harvard astronomer, in 1984. He postulated that there was a collision, or a series of collisions, between Earth and another planetary body about 4.6 billion years ago, leading to the formation of the moon. "The hypothesis resolved the problems of the low density of the moon, the lunar orbit and the high angular momentum of the earth-Moon system," says S R Taylor of Canberra-based Australian National University, the first scientist in the world to analyse the rock samples brought back by the Apollo ii mission. The material in the moon was mostly derived from the mantle of the impact, not from Earth, so accounting for compositional differences.

The significant variation in the density of the moon (3.34 grammes per cubic centimetre (gm/cm 3) and Earth (5.52 gm/cm 3) has always been an enigma for scientists the world over. Other puzzles, according to Taylor, include the composition of the lunar mantle structure, the existence -- or not -- of a metallic core, the thickness of the feldspathic crust (the crust is made of feldspar) and the moon's bulk composition.

A reason scientists feel they do not know enough of the moon is because almost all the landing missions(six of Apollo and three of Luna) alighted near the lunar equator on the near side of the moon. As a result, the samples they returned never ever represented the moon in its entirety: these rock and dust samples were largely collected from Maria, which covers only 16 per cent of the lunar surface (Maria, literally "seas", are filled molten lava from earlier periods of lunar volcanism). But the bulk of the lunar terrain is heavily cratered and comprises very old highlands, a fact substantiated by subsequent orbiter missions that had more sophisticated instruments. Also, data the Clementine mission collected helped produce new insights into global, regional and local geological process in both the highland and Maria.

"To date no orbital sensor has directly addressed the mineralogy of the Moon," says Peters, professor, Department of Geological Sciences, Brown University, usa. But, "The questions posed to understand the character and origin of this led us directly to the limits of knowledge," says Carle M Peters, widely known as the grand-old woman of lunar science. These limits are now poised to be tested, as never before.