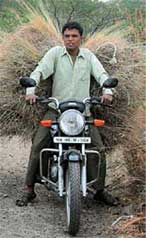 Hail those who bail themselves out

Move over, Dwalpment. Beyond boom-and-bust cycles, there exists the exponential effect of growing grass to bind the soil, planting trees once the soil is so held, catching every drop of water clouds supply, accounting for every drop of water demanded, and so prospering.

The US Treasury cannot fathom contour-trenching, gully- plugging, grass-cutting, milch livestock or a water audit. Finance capitalism cannot match the complexity of a watershed, where all profit arises out of consensus, where survival evolves to a political consciousness of a nurturing kind.

A trader in futures or derivatives, can't match a gram sabha--he is a mere individual; they function as decisive one. He can only speculate; they converse for a concrete outcome. His intelligence is portfolio-divergent; they converge to a shared plan. His focus is the moment; they prosper over time.