An emissions trading programme, introduced in the US to provide incentives to companies for emission control, could be an effective instrument in checking air pollution 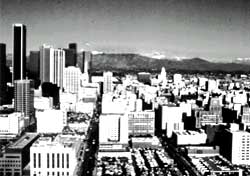 in the us, the region in and around Los Angeles has always suffered the country's worst air pollution. Previously, air quality management plans (aqmps) had followed the command-and-control policy implemented by the South Coast Air Quality Management District (scaqmd), the environmental agency responsible for air pollution control in the Los Angeles air basin. While regulations under these plans became increasingly stringent, costs for industry grew enormously.

In 1990, therefore, the scaqmd and other organisations and businesses began to work on the concept of market incentives for emission control. And thus, on January 1, 1994, the Regional Clean Air Incentives Market (reclaimA), a novel emissions trading programme, was born.The avowed goal of reclaim is to give facilities (companies) flexibility in meeting their emission reduction requirements and to lower the costs of compliance.
Under reclaim , all major stationary sources with no x (oxides of nitrogen) or so x (oxides of sulphur) emissions greater than four tonnes per year receive an annual emission cap. The annual emission allocation each facility receives authorises it to emit a certain quantity of nox or sox per year. All facilities have received and will receive annual allocations for the years 1994-2010.

An allocation is the number of emission credits a facility can use to cover annual emissions. Credits that have not been used can be sold to other facilities. All credits (called reclaim tradingcredits or rtcs) have a denomination of one pound sox or nox and are valid for one year. Each successive year, the facility receives a smaller number of rtc s, so that by the year 2010, the overall nox emissions will be reduced to 25 per cent and the sox emissions to 40 per cent of the 1994 levels.

While traditional regulations under the aqmp had limited the emissions for each source, every facility under reclaim has a single permit that encompasses all emission sources. This allows each facility to choose the most cost-effective strategy for meeting annual emission targets. Facilities that can reduce their emissions below their annual allocations can sell the difference to other facilities. Those that have high emission reduction costs can purchase cheaper emission reduction credits from other facilities. The total emissions in each nox and sox market is determined exogenously by the scaqmd and thus cannot be exceeded at any time.

Smaller facilities are excluded from the programme, as the high rates for controlling emissions would discriminate against them. However, they can enter the programme voluntarily. reclaim now encompasses 390 facilities in the nox market and 41 in the sox market, but covers 65 per cent of all nox and 85 per cent of all sox emissions from stationary sources. To ensure that overall emissions do not exceed the targeted levels, new businesses entering the reclaim programme do not receive any rtc s, but have to purchase them from the established facilities.
Facilities are not only allowed to trade in rtcs that are valid for the current year, but also in credits for use in future years. However, the credits are still valid for only one year and can be used only in the year for which they were issued.

Each facility has to certify emissions on a quarterly basis to determine compliance with its annual allocation. If, at the end of any quarter, emissions exceed a facility's annual allocation, a reconciliation period is available during which additional rtcs can be bought.

Presently, there are two ways in which rtcs are traded. Bilateral transaction between buyers and sellers constitutes the first way. The brokerage firm Dames & Moore Air Trade Services of Los Angeles and San Francisco, acts as an agent in these transactions.The first large transaction involved Anchor Glass of Huntington Park which purchased 3.4 million pounds (453 g) of nox credits from Torrance-based Union Carbide for us $1.27 million, ensuring itself enough credits until the year 2010. Anchor Glass said that the cost to reduce emissions would have been about us $6 million; by purchasing rtc s, the company saved 75 per cent of this.


According to environmental economists, tradeable emission permits are both economically and ecologically efficient. reclaim's economic efficiency depends on two aspects:

l Ability to lower reduction costs within a facility

According to the socio-economic assessment performed by the scaqmd , reclaim is expected to decrease emission reduction costs between 1994 and 1999 by an average of us $57.9 million annually. On an average, reclaim will have a 42 per cent cost reduction compared to the command-and-control-policy option.

The cost saving expectations of companies, however, differ. Large facilities argue in favour of reclaim because they hope for much lower costs than under the aqmp . Rosemead-based Southern California Edison, a large electricity supplier, predicts cost savings of us $48 million; instead of an original us $228 million, environment related costs are expected to drop to us $180 million.

The two largest suppliers of petroleum products in the basin, arco and unocal , expect 50 per cent cost savings. unocal maintains that emission reduction costs could be lowered by reclaim from us $200 million to us $100 million. arco believes its costs would regress from us $400 million down to us $200 million.

The second aspect of economic efficiency under reclaim is in trading rtcs with other facilities. Many companies find it cheaper to buy emission credits than invest in reduction measures, while others are better off with reducing their own emissions and selling extra rtc s.


Most criticism of reclaim comes from small companies, which see themselves being discriminated against. While reclaim provides large companies with flexibility and cost reduction facility, many smaller concerns fear incurring increased costs and decreased operational flexibility. Most smaller companies are in the manufacturing business and are 'job shop'-type operations. This means that there is not a steady flow of production and consequently, an inconsistant level of emission.

Under the command-and-control policy, companies responded to changes in demand by simply increasing their production levels, because they did not have any limits on emission or production. Under reclaim, any increase in production from previous levels makes them liable to be penalised; the penalty requires them to purchase additional rtcs. Additionally, the fluctuation in the output and emission levels of small companies makes them much more vulnerable to the uncertainty of the rtc market than their larger competetors. The larger companies that have a constant output level and, therefore, can calculate their rtc needs for the next few years in advance and provide themselves with permits in due time.

Large companies have a wide variety of different emission sources, and thus can install emission control technology at the source where emissions can be checked most effectively. Small facilities - having no more than one or two emission sources and thus, little choice - are disadvantaged in this regard.


To test reclaim 's claim to ecological efficiency, the scaqmd , by using a computer simulation, forecasted future no x and so x emissions under reclaim and compared them with the estimated emissions of a continued command-and-control policy.

This comparison shows that reclaim emissions exceeded those projected under the aqmp only twice ( nox, in 1996 and 1997).However, the environmental organisations that have contributed to developing reclaim - the Coalition for Clean Air and the Natural Resources Defence Council - believe that reclaim does not ensure pollution reduction as effectively as does the aqmp.

An over-allocation of rtcs is one of the reasons. Facilities were granted their 1994 allocations by choosing the highest production year between 1989 and 1992. The motive behind this method was to avoid allocating emissions that were below 'normal' levels during the recession (1991-92). Resultantly, oil refineries and electric utilities, which account for almost two-thirds of the nox pollution under reclaim , have not been affected by the recession. In fact, over 50 per cent of all reclaim facilities had their highest outputs during the recession. Additionally, while the economy generally fluctuates slightly from year to year, individual companies go through much larger peaks and valleys; current reclaim allocations take into consideration the sum of every company's peak, thus over-allocating rtcs.

The second reason is that reclaim's penalty structure creates decreased instead of increased deterrence for larger excess tonne-violations, and thus provides an incentive to cheat. Environmental organisations and companies also feel that reclaim's impact on air quality is much too small. Only 10 per cent of nox and 25 per cent of sox emissions in Los Angeles fall under the reclaim programme, as it excludes all mobile emission sources like automobiles and planes, though these account for over 70 per cent of all emissions in the basin.

Though reclaim is the right step in the right direction, its efficacy would have increased manifold if small enterprises could have been excluded from its ambit and if rtcs could have been granted more selectively. But since tradeable emission permits allow limits on the quantity of emissions and give businesses enough flexibility to meet these limits in a cost-efficient way, the use of this instrument in environmental policy is bound to grow steadily.