India's pampered nuclear power programme is losing steam. Uranium stocks are almost over; people won't let the government dig new mines; all projects are running late and new technology is almost impossible to get as decommissioning reactors is the trend world over. Is the Indian nuclear establishment's target of 20,000 MW by 2020 just a fantasy?
RICHARD MAHAPATRA & T V JAYAN get to the core 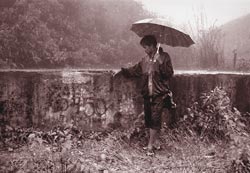 India's limping nuclear establishment wanted a new mine to dig but the verdict it got from the people was -- no. When the Jharkhand state pollution control board held a public hearing on February 25, 2004 in East Singhbhum district's Banduhurang village to get environmental clearance for the Uranium Corporation of India Ltd's (UCIL) proposed mine, three villages refused to be displaced. The villages reminded UCIL that it still hadn't given them compensations promised in 1985 when lands were taken away for a uranium mine near Thuramdih village.

At the meeting, anti-nuclear activists reeled out stories of radiation-related health problems in villages around uranium mines. UCIL and pollution control board officials countered this by telling people not to worry.

Harsingh Padeya, village head of Banduhurang, doesn't buy UCIL's claims. He lost his lands when UCIL, a company controlled by the Department of Atomic Energy (DAE), started the Thuramdih mine. He is still waiting for the compensation, and there are at least 250 displaced people like him. "I fear that they wouldn't keep their word again and that is why I will vacate my land only if I get all compensation, old and new," says Padeya.

Roughly 5,000 people would be displaced by the proposed Banduhurang mine. So this time when the villages got a relocation notice before the public hearing, Padeya and others decided: "No uranium without compensation."

Villagers and environmental activists hounded the hundreds of officials at the hearing. They demanded to know if the new mine would cause radiation like the ones in Jaduguda and what would they get in compensation. "Poverty is more hazardous than radiation. What if we leave our village and don't get good compensation," says Ashwini Sahoo, a resident of Kerwa village. "The hearing didn't promise us a good compensation package and without it we will be destroyed." " UCIL's credibility is in question, and we hesitate to take a decision based on its claims," says Arun Nayak, a resident.


Public protests against UCIL have prevented it from opening up any new mine since 1985. In last six months, UCIL has tried thrice to set up new uranium mines in Andhra Pradesh, Meghalaya and Jharkhand but hasn't got permission anywhere. The Andhra Pradesh and Meghalaya governments have agreed to UCIL's proposal in principle, but have withheld permission because of public pressure and nuclear activists' campaign focusing on UCIL's poor safety record in Jaduguda.

That record has landed UCIL in the court too. The Supreme Court since 2000 has been hearing a public interest litigation (PIL) filed by Delhi-based lawyer B L Vadhera, which alleges that UCIL's mining has created radiation and health problems in Jaduguda. The Supreme Court on March 23, 2004 was shown independent studies, which allege that irresponsible handling of uranium ore had put some 50,000 people in Jaduguda at risk and caused genetic deformities in the area.

And there is no end to UCIL's public drubbing. On January 28, 2004 the Andhra Pradesh pollution control board (APPCB) rejected the company's Rs 400-crore project to set up a uranium mine at Lambapur-Peddagattu village and a processing plant in Mallapuram village of Nalgonda district. The board's committee for establishment (CFE) decided a processing plant couldn't be allowed at Mallapuram because it would be near the catchment area of Nagarjunasagar reservoir that supplies water to Hyderabad. The reservoir already has uranium concentrations in the range of 2-3 g/l which is below the World Health Organization's preliminary guidance of 9 g/l, but experts say if mining is permitted in the Lambapur-Peddagattu area the leaching of radionuclides into the reservoir will increase. The pollution board's technical committee wanted to permit a mine at Lambapur-Peddagattu if UCIL followed safeguards but CFE refused.

To get over this problem, a public hearing was convened which many believed would help UCIL get a rubber stamp clearance. When the Andhra government announced in February 2003 that UCIL wanted to dig a uranium mine in the state, it faced several protests. So the government stopped speaking on the issue and then in July 2003 the APPCB abruptly announced in local newspapers that a public hearing on the proposed mine would be held on August 19, 2003 at Peddagattu. The venue was a remote hillock, roads to which had been damaged during rains. The state high court stepped in after hearing a PIL by Movement Against Uranium Project (MAUP-a confederation of 20 anti-nuclear groups in the state) and asked the pollution control board to hold a second public hearing on the same day at Pedda Adiserapally, the block headquarter. But at this hearing, another stratagem was used to block the people and civil society groups. Police personnel strictly monitored people and discouraged them from speaking up. UCIL officials tried to mislead people on facts and figures. "They decided not to listen to anybody," says J Rama Rao, a member of civic group Better Hyderabad.

But all these tactics didn't work. UCIL failed to convince the gathering that the mine would be safe. The ore from the proposed mine would be rich in uranium, UCIL officials told the public hearing. That claim contradicts the company's own March 2003 environmental impact assessment report, which says the uranium here is of 0.02 per cent grade. This means for every 1,000 kg of ore mined only 200 gm of uranium can be obtained. Interestingly, UCIL officials tell people they don't risk health hazards because there is so little uranium to mine. "Compared to Nalgonda, mines in countries like Canada yield 2 to 12 per cent of uranium. We are less at risk," says Ramender Gupta, chairman and managing director of UCIL.

"An environment impact assessment done by UCIL has to be examined carefully. The examination will be no use if it is done by people who thrive on grants and favours from the department of atomic energy," says Buddhi Kota Subbarao, a former nuclear scientist and a Supreme Court lawyer who has studied what the environmental impact of the proposed Nalgonda uranium mine would be. The proposed mine has now become an issue in the state's politics. On August 16, 2003 Opposition parties came together to oppose the project and Congress sent a letter to the chief minister, requesting him not to permit the mine. Chief Minister Chandrababu Naidu on August 18 issued a statement that he hadn't granted permission.


Domiasiat village in Meghalaya's West Khasi Hills contains India's largest and richest uranium reserve. To convince people that mining this treasure trove would be safe, UCIL has flown important political leaders and journalists of Meghalaya to Jaduguda to show its 'safe' mining practices. "This is a transparent way to educate people about uranium mining. Our problem is that uranium was introduced to the world through atom bombs and we still suffer from that image," says A C Kundu, general manager (mines), UCIL.

But this PR gimmick and a decade of lobbying with the state government and local communities hasn't won the reserve for UCIL. "Every time we turn up at Domiasiat, people chase us away calling us agents of death," says a senior UCIL officer. The company has been exploring at West Khasi Hills for three decades, but hasn't done any study on what impact uranium mines would have on the environment.

The Khasi Hills Autonomous District Council, which decides about the community land, has withdrawn the permission it had given to UCIL for exploring the area. "We cannot allow UCIL to start uranium mining and overlook the health hazard this could cause," says Dino D G Dympep, secretary general of Meghalaya People's Human Right Council, a non-governmental organisation.

The sandstone-type uranium deposit at Domiasiat will be cheaper to extract because it's near the surface. UCIL estimates that Domiasiat has about 10,000 tonnes of uranium ore, which is spread over a 10-sq-km area. A sum of Rs 450 crore was earmarked in 1992 for a pilot project but a massive public protest in 1996 forced UCIL to withdraw from Domiasiat. Undeterred by this, the Geological Survey of India in 1998 identified 20 other places in Meghalaya with rich uranium deposit. UCIL wants to mine all of them, displacing an estimated 1,00,000 people. Dympep says, "I have seen in Jaduguda and will never let it be repeated in Meghalaya."

In April-May 2003, UCIL conducted a geophysical survey in Domiasiat and this time it negotiated with individual residents instead of the state government.The state's chief secretary admits the government has not been consulted during this survey. UCIL has met the state Chief Minister, D D Lapang, twice since last year and promised investments in the state but Lapang has refused to make a commitment.