India, which gave the red jungle fowl, the mother of all poultry to the rest of the world, is now importing poultry from outside and destroying its own indigenous species. Today these unique breeds are disappearing, partly because of neglect and partly because of crossbreeding; about 99 per cent of all wild populations have been contaminated by domestic or feral chicken. But certain rare breeds still exist and there is time to save them 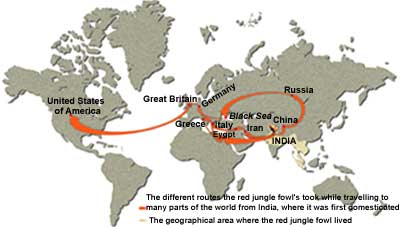 long before the birth of Christ, a bird, never seen before in the valley of the Blue Nile, reached the court of the pharaohs. Neither the architectural grandeur of the court nor the 'gold-draped' Pharaohs could silhouette its beauty. A bright red comb rested regally on its head and shiny green and red feathers clothed its body finally ending in an eclipse plume. The Egyptians had never seen a bird which laid so many eggs. When it crowed, they listened with rapt attention. When it walked around the court, everyone made way. It became a showpiece in the Pharaoh's court. Fascinated, they adopted the bird. Everbody used to be shown the chicken and training camps were set up on how to get this wild red jungle fowl ( rjf ) to lay eggs.

But much before the bird reached Egypt, available literature suggests that rjf ( Gallus gallus ) was first domesticated in the twin cities of Mohenjodaro and Harappa in the Indus valley around 2500-2100 bc . Seals were found at Mohenjodaro depicting fighting cocks. Various clay figurines of the fowl were also found, including one of a hen with a feed dish. Two clay figurines were found at Harappa appearing to represent a cock and a hen.

While most wild animals were domesticated for meat, in the case of rjf , which belongs to the family of pheasants, it was for its fighting abilities. In Bhavprakash Nighantu , a book on ayurveda by Acharya Bhavprakash, he states that the Vedas, too, praise the fowl for its 'courage'. Referred to as kukuth , it says that among the 20 qualities such as courage that a human being should possess, four should be acquired from the fowl alone.

The Indians were also the first to realise its medicinal and nutritional worth. Special attention has been paid to the bird in the ayurvedic system of medicine also. "The fowl is a medicine in itself," agrees Vaidya Balendu Prakash of the Vaidya Chandra Prakash Cancer Research Foundation, Dehradun. Rich in minerals such as copper and iron, in course of time, the fowl also became a welcome bribe (see box: Wonder bird ).

From the centre of domestication, the fowl soon moved where trade took the Indo-Aryans. Persia, modern day Iran, was possibly one the first countries to receive the domestic fowl from northwest India as part of the trade connections between the agricultural areas of the Indo-Gangetic plain and the Fertile Crescent. The Persians then took it to Mesopotamia (modern day Iraq), from where it went down to Asia Minor. In the 7th-8th century bc, it moved further to Greece and, by the 5th-6th century bc , it had encompassed a large area of the Mediterranean basin, where it received special privileges and honour in the Roman empire. The Romans considered it as sacred to Mars, the God of war, while Plato wrote of people cock-fighting instead of labouring.

In Egypt, domestic fowl became firmly established under Greek and Persian influence. Several pictorial and written artefacts have been found in Egypt. One of them is a rooster's head in a mural from the tomb of Rekhmara, vizier of Thutmose III (1479-1447 bc ) at Thebes. Discovered in 1835, the drawings appeared in several books on Egyptian art and archaeology. The first reproduction was in Travels in Ethopia published in 1835. The mural depicted a procession of 50 human figures representing many races bringing tribute to Thutmose III. The tribute include a variety of animals and birds. Among them was a gold image of the head of a rooster with a pea comb and features of rjf.

The other possible route the fowl took while travelling to many parts of the globe is to Europe via the Black Sea through China and Russia. Ancient Chinese documents also indicate that the fowl was introduced in the country as early as the 13th or 14th century bc . The rooster is one of the 12 astrological signs in the Chinese calendar. They also reached the Germanic and Celtic tribes before the Christian era. They were brought to the us about 470 years ago with the European conquests.

Along with its spread, the fowl was christened according to the local dialect. For instance, pullet (young hen) in Latin comes from the word pil in Sanskrit. Similarly, chicken and cock comes from Sanskrit kukuth or kukutha . Nomenclature aside, everywhere it went, it was regarded as a special bird (see box: Cocktale ).

The diffusion rate of the fowl is quite remarkable. In the book, The Chicken in America (1975), G F Carter, using dates of first records in widely separated places, estimated the rate to be between 1.5-3 kilometres a year -- reasonably consistent with rates of other things like technologies and ideas. Backyard poultry became common. Soon people started developing newer breeds with selective cross breeding with other fowl, depending upon their egg laying and meat yielding characteristics. After a long period of trial and error the Asiatic, us and English breeds of the 'chicken' that we have today were finally born. All trace their parentage to rjf . Today, it has become a source of food for a large percentage of the world's population. It is estimated that around 14,000 million tonnes of chicken was consumed in 1996 the world over. Unfortunately, in India, the land where it was domesticated first, the bird is almost forgotten. A recent study suggests that there may not be any pure strains of rjf left in the country. Worse still, nobody knows for sure because of the lack of research on the bird that gave us today's 'table God'.