Use of glass in construction has become a fad. But it is not the right choice for Indian climate 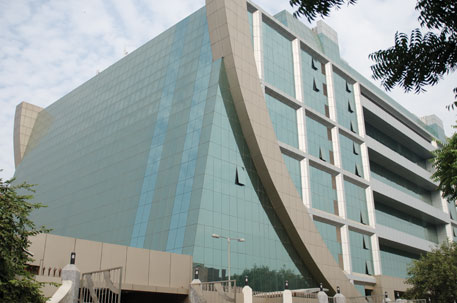 There was commotion at the CBI headquarters in Delhi on the day the Northern Grid tripped in July. Though diesel gensets sprung into action, the building occupants were visibly uncomfortable as the central air-conditioning chillers had no power back-up. The overwhelming glass envelope of the building led to quick increase in temperature. It became unbearable, especially because the glass panels designed as windows would not open. “It was a nightmare,” said an official who did not wish to be named. Frantic calls were made to the National Building Construction Corportion, responsible for its construction, for a solution.

Despite many such experiences, the use of glass in construction is gaining popularity in the country. Industry is hard selling the material on the ground that glass contributes to aesthetics, energy efficiency, safety, security and comfort. Even Saint-Gobain Glass, the world leader in glass manufacturing, has a website glassisgreen.com. The company’s India unit is the founding member of the Indian Green Building Council that awards green ratings to buildings. The website of another glass maker AIS Glass also highlights the green caliber of glass.

Of course, being transparent, glass gives a sense of open space. By letting in natural light, while keeping dust and insects away, it reduces the need for artificial light. But there is a cost to it. Glass traps heat. This is the principle on which greenhouse works. Buildings with high proportion of glass, thus get overheated, pushing up the energy use for keeping it cool. This is unsuitable for the tropical climate of India. “Unlike cold countries, we need to control heat gain,” says Harsha Sridhar, architect with Initiative for Green Habitat in Bengaluru. “In addition we have to deal with the high glare.” Delhi, for example, receives 2,688 hours of sunlight annually as against London that receives only 1,480 hours of sunlight in a year.

“The blinds remain perpetually drawn in our office building despite tinted glass to cut the glare,” says Sahiba Hameed whose office is in a high-rise glass building in Gurgaon. Workstations near the windows become too hot during the day, she adds.

To cut down heat and glare transmission, the glass industry has devised several technologies. A typical version is double glazing with air gap in between for insulation. It is used in most high-rise buildings. An advanced version, triple glazing, is trying to find a foothold in India. But heat transmission through glass is still high compared to other building materials (see infographic). AIS Glass admitted this at a green building rating conference held in Delhi in March 2012.

A study by IIT-Delhi in the national capital city, Jodhpur and Chennai found that energy use increases with the increase in glazed area, irrespective of glass type, climate or orientation of the building. For instance, glazing on the northern wall of a building allows the least gain in heat as compared to any other facade orientation. But if the glass wall covers more than 20 per cent of the south-facing facade, the building overheats even in winters (see ‘Plan your facade’). 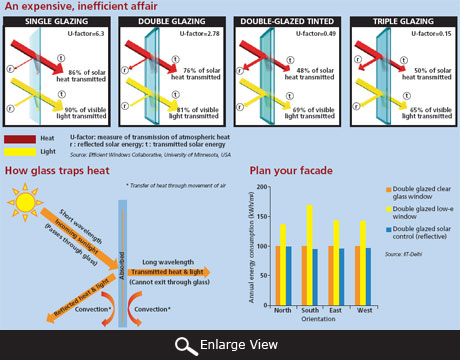 “There is no doubt that wall-to-window ratio (WWR) is critical in air-conditioned buildings. High amount of glazing leads to higher energy consumption,” says Girja Shankar, assistant energy economist with the Bureau of Energy Efficiency (BEE).

Besides, glass is not an environment-friendly material. It consumes high amount of energy right from its manufacturing to transportation and installation. The embodied energy of glass is between 15.9 and 26.2 megajoules per kg; it is 1.06 MJ/kg for bricks. The embodied energy of glass increases considerably when used as double or triple glazing or when inert gases like argon replace the air gap to further improve performance. “Even the recyclability of glass as claimed by the industry seems dubious,” says Sridhar.

Glass also poses safety concerns. In 2011, Mumbai’s chief fire officer Uday Tatkare told a leading newspaper that buildings with glass facades are major fire hazards and hindrance in fire fighting. Glass sheets often do not have fire retardant coatings and shatter once the threshold temperature exceeds. There are no standards to regulate the quality of glass used in buildings. To make matters worse, BEE offers considerable leeway for the use of glass in commercial buildings. Its energy conservation building code allows a maximum WWR of 60 per cent. “BEE plans to modify this value as different orientations require varying WWR,” says Shankar, admitting that glass structures are not suitable for Indian climate.

Glass is also expensive when compared with other building material. A square metre of glass costs between Rs 1,200 and Rs 7,000, depending on the technology. A good quality brick wall costs less than Rs 1,000 per sq m.

Yet the obsession with glass is growing. “It is even used where it is not required. In buildings like malls, glass facades have become inevitable,” says Haneet Khanna, a Chandigarh-based 3D visualiser. Be it Gurgaon or Bengaluru, instead of innovating designs to suit local conditions, identical glass buildings are being built.