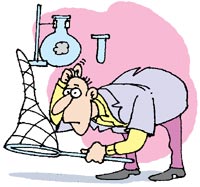 Research on nanoparticle emissions from vehicles is still in the academic domain. This is largely because the uncertainty over formation of nanoparticles and their measurement methods. As a spillover, regulatory mechanisms are not yet able to take into account this new science. They still use mass of emitted particles -- rather than numbers -- as a yardstick to measure pollution . According to Wexler, the reason why regulations are based on mass of particles is because scientists measured these, did epidemiological studies and found a correlation with adverse health effects. Lennart points out that "so far there is no standard for measurement of nanoparticles and different laboratories uses different methods of sampling. It is therefore hard to compare the result between laboratories, but easier to compare different test at the same laboratory."

Moreover, since emission conditions are highly variable in real-world conditions, it is difficult to link the on-road emissions with the corresponding ambient concentrations in a simple way, say scientists from Paul Scherrer Institut, Switzerland and University of Minnesota, USA. Even the other aerosols in the ambient air can have a great effect on the nucleation and growth processes of the exhaust complicating the issue further, they say.

According to Greenbaum, one of the big controversies in measuring nanaoparticles is how to account for the part of nanoparticles that are not made up of solid carbon or sulphates, but rather consist of aerosol droplets formed around hydrocarbons. These are potentially harmful, but some measurement techniques (using a thermal denuder) burn them off before measuring the number of particles.

One way scientists simulate formation of nanoparticles is by using dilution tunnels. Different types of dilution tunnel are used to investigate nanoparticle emissions and there is some uncertainty as to how the difference in these tunnels may affect results, and how closely the tunnels represent ambient dilution. According to Tristan Davenne of the University of Cambridge, "There are a number of dilution parameters which vary from one dilution tunnel to another and may be responsible for transforming the particle size distribution measured after dilution," he says. Points out Mayer, "Engine development as we see it now as well as fuel development are by no means sufficient to reduce emission of the nanoparticles." According to him regulation of particle mass is not sufficient for three reasons: (1) reducing particle mass means reducing large particles; nanoparticles have hardly any measurable mass, (2) sensitivity of mass measurement methods is not sufficient to reduce limit values to levels required to clean engines of nanoparticles, and (3) the mass could be just water on slightly acidic condensates or it could also be PAH and solid nanoparticles. Therefore, for management and control of fine particle emissions, particle number or particle mass in the ultrafine range should be used as an indicator, conclude a group of scientists from Centre for Medical and Health Physics in Queensland University of Technology.

Yet, an immediate prospect of setting emission standards or regulating emissions of nanoparticles seems bleak. Says Wexler, "I would say that things are in the research phase right now, and regulations are still in the future." But Harrison has a different point of view. According to him though the measurement technology is well developed, at the moment the available epidemiology is extremely limited and standards could not be set with a high degree of confidence.


Recent scientific studies have thrown up a highly interesting and relevant debate regarding monitoring of ambient particles. It is being argued that measurement of particulates in terms of mass only does not bring out the risk from exposure to the number of extremely tiny particles. Therefore what is more important is to monitor the number of particles in different size categories. A recent joint report by Lidia Morawska of the Centre for Medical and Health Physics at Queensland University of Technology, and Dietrich Schwela of World Health Organisation says that most of the mass of particles in the ambient air is due to the presence of a very small number of large particles. But, when considered in terms of number, ultrafine particles constitute over 80 per cent of particulate matter, although their total mass is usually insignificant in comparison with the mass of few large particles. The report argues that the highest level of concentration of toxic compounds is related to these ultrafine particles, and therefore throws up the question that whether physical, chemical and biological characteristics should also be measured in addition to numbers.

In a study conducted to find out the particle number concentration in urban environment, researchers from the National Environment Research Institute, Denmark measured particles with a range of diameter from 10nm to 700nm. They found that the average traffic particle emissions between 6 am and 6 pm showed a size distribution with the maximum around 25-30nm. According to the researchers, this indicates that petrol and diesel vehicles emit particles in a similar size range. However, they found that from 12 pm to 5 am, when the dominating traffic was that of diesel taxis equipped with an oxidising catalytic converter, the maximum in the emitted particle size distribution was shifted to smaller sizes of about 15-18nm.

While scientists are trying to grapple the import of the new findings, results of another study by the University of Birmingham in 1999 implicate road transport for emitting such ultrafine particle emissions. The study shows that at busy roadside, more than 44 per cent of the measured particles are below 10nm, while the corresponding figure at an urban background can be 30 per cent. This has led researchers to demand that number of particles in the ambient air be used as a yardstick to evaluate air quality. At present, air quality standards of all countries in the world measure the concentration of particles only in terms of mass.

In sum, the regulatory mechanism is still not prepared to build on the emerging science of nanoparticle emissions. Even as it continues to set more and more stringent norms -- both for emissions and ambient air quality -- it now faces an unexpected challenge. Once more the emergent knowledge on nanoparticles, still somewhat nebulous but decidedly indicative, demands the scientific community and the regulatory authorities to put their heads and capacities together.


Of primary concern is the fact that finer particles penetrate more readily into cells and through tissue barriers, that they have greater surface area per unit mass and a large number of toxic reactions occur at the surface. Years of research have validated the adverse effects of fine and ultrafine particles. Yet not much definitive information is available on how nanoparticles affect human health. Greenbaum points out, "To date, there is evidence that nanoparticles can cause adverse reactions in animals and humans, but epidemiology studies have not yet determined whether those reactions are worse than those caused by other parts of the particle mixture." Wexler, however, is of the opinion that conclusions about adverse health effects of nanoparticles is more of a logical than direct: the minuter the particle, the greater its propensity to adversely affect health. Hence PM1 would shows a better correlation with adverse health than PM2.5, which in turn shows a better correlation than PM10. "As you move towards smaller particles, their number is substantial," he says. Therefore, they can be critical to public health, he says.

However, a recent study presents scary results. Researchers from the US-based West Virginia University found that though the use of synthetic diesel decreased PM mass emission rates, it increased the number of particles deposited in the alveolar region. Moreover, even as the use of oxidation catalytic converter and catalysed particulate trap decreased particle mass emissions and subsequently reduced mass deposition deep inside the lungs, the number of particles deposited in the alveoli -- the lung's breathting sacs -- increased. Their natural suggestion was to do count-based analysis of PM emissions in addition to mass-based emissions.

Though earlier studies have shown that macrophages -- cells that police the lungs, eating up foriegn particles -- ingest the inhaled particles, new studies show that the smallest particles partially escape detection by the much larger macrophages and are not ingested. According to L Hofer, a Switzerland-based occupational health specialist, respiratory pulsation, by which the alveoli dilate and contract, expels some of the particles into the bronchiole, possibly after prolonged retention in the alveoli. He points out that these particles could also penetrate, through the narrow interalveolar pores, into the pulmonary interstices (the interstitium). There the lymphatic fluids can capture and transport the particles to the regional lymph nodes. As these particles do not decompose easily, they are retained for several weeks, months or years in the interstitium and in the lymph nodes. Such particle accumulations are mutational and tumor inducing, he says. The particles are also partially dissolved and transported to various organs. Prolonged high concentrations of particles in the respiratory air cause alveolar overload, that is, the particle invasion overwhelms the scavenging mechanisms of the body. The decomposing macrophages then release inflammatory substances that can damage the alveolar walls.