Only promises: some villagers want out, others fight it out 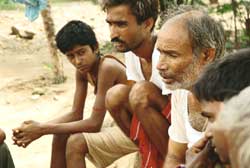 Gopalpura demonstrates all that is wrong with relocation programmes. About 50 families live in the village, without electricity. Recently one house managed to get power, but it belongs to an outsider who brought land in the village. "We were removed forcibly from our villages. The forest department made countless verbal promises but none were fulfilled," says Jagdeesh Sharma, a resident. Villagers say the land on which they were relocated is infertile. Fateh Singh, then with the forest department, says in retrospect: "I had warned against relocating in this area as the land there was not good."

Villagers don't even have water for irrigation. Many have sold their land and moved to Jaipur to work as labourers. "When we were relocated we were promised electricity, water, a school and medical facilities. We got nothing," says Sat Narain Gujjar. A school was constructed four years back. But it is only till class 5. There is not a single matriculate person in the village, villagers say. There is no road access to the village. And there are no medical facilities.

The number of livestock per household has fallen from 50 to two or three. Grazing is still a problem. "Since we were not given land to grow fodder we have to enter the forest," says a villager. "While their (forest department's) animals enter our village and destroy whatever standing crop that we have, our animals are not allowed to go into the forests," says another. "Why were we relocated so near the park?" the villagers ask. They want to move. "What has this park given us? We don't get any benefit from tourism but pay a heavy price," says Sat Narain. It's the same at Kailashpuri. The nearest bus stand is 5 km away, the nearest dispensary 7. Most people work as labourers in Sawai Madhopur or Jaipur.

Even conservationists agree that relocation is in shambles in Ranthambore. "At the time of rehabilitation, the forest department had only given verbal assurances of providing facilities like a well for drinking water, a school building and most importantly levelling the land allocated...But these promises were not fulfilled. Even the well was left half dug ... . Availability of fodder and drinking water for livestock was scarce ... and, therefore, the animal husbandry occupation of the rehabilitated families was adversely affected. They could not develop agriculture too, because the land was of poor quality and it had not been a traditional occupation for this community," notes Ranthambhor Revisited , a Worldwide Fund for Nature report.

The villages within the core of the park are worst off. The Tiger Task Force had, on its visit to Ranthambore, visited one such village, Indal, and encountered abject poverty. It says "this is real indictment of the process of relocation".

Uliana and Mai Kalan, located in the fringe area, have, however, taken a confrontationist route. "Our animals are right now inside the park for grazing," says Sitaram Meena. The villagers had not even allowed the construction of the forest boundary wall near their village. "We have no option. Tourism does not give us anything," says Kalyan Meena. "Selling milk is our main source of income. Give us an alternative and we are ready to sell our animals."

It's the same in Mai Kalan. About 50-60 villagers with over 200 cattle were in the park when dte visited. "We are fighting for survival," says a villager.