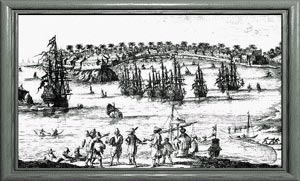 Between the 16th and 19th century, a secular Euro-Asian and Euro-American trade boomed, following the voyages of Christopher Columbus, Vasco da Gama and other explorers. Europeans encountered exotic spices, silk, sugar and gold -- items that were not seen or produced in their lands at all. Competition for selling these goods sparked off trade wars; every territory gained was carefully guarded: armies backed up powerful companies and forts were built along important ports.

One such was Galle in Sri Lanka. The port was discovered accidentally when Portuguese ships sailing towards Maldives were swept on to a rocky peninsula in Sri Lanka. The fort derives its name from gala -- or the rock the Portuguese took from Sinhala kings in 1578 to erect their first fortifications. It was a single wall fronted by a moat, which extended from the sea to the harbour. In 1640, the Dutch under General Koster captured the fort. They expanded and strengthened it; a large moat now surrounded the north face, which was connected to the mainland. The bastions and ramparts were slightly inclined, from northeast toward southwest, where all the freshwater would drain into three large underground rectangular tanks.

Galle had a storm water drainage system, which prevented flooding. The system consisted of six great brick-lined underground drains, which were automatically flushed twice a day by the tide. At the top of the rampart of the northeast slope was a windmill, which used to power the filling of tanks with seawater to wash the streets. As the tide ebbed, dirt from the streets of the fort was released into the sea through a sluice that opened into one of the drains.

The moist warmth of the interiors of these drains was used to breed male muskrats; they were brought by Dutch traders to Galle and musk sold well in Paris, Amsterdam and Venice -- a gram of musk was worth more than a sack full of pepper and a handful of vanilla beans or saffron. Muskrats (Ondatra zibethica) were extremely rare in plains and riverbeds of Europe and America. The Dutch thought of this ingenious way to breed them in drains and feed them on insects, worms and human waste. Galle's tropical environment and the constant inflow of mussels, crabs and shrimps from the sea caused rapid multiplication of these creatures. About five to eight muskrats were put in large metal cages and lowered into the drains. Every week the creatures were hoisted and milked for their musk. A male muskrat in its lifetime could produce only a tablespoon of musk. By 1742 Dutch vessels stopped from Indonesia and Malacca, at Galle to add to their bounty of eighty pounds of musk every year. In an expanding European market for exotic perfumes and cures, musk sold at an exorbitant price.

Other uniqueness
Dutch port cities had other distinctiveness. The colonists used their unique formula of using watercourses to wash off their sewage and wastes downstream effectively, wherever geography permitted. In old Dutch fort of Batavia (now called Jakarta) an arm of the river Jakarta was used to flush the city's sewer by using a series of sluices, locks and weirs. In Georgetown, Guyana, and in Paramaribo, Surinam, the Dutch used their home expertise to build dykes to prevent seawater from flooding. This enabled the Dutch colonists to establish cities in areas well below sea-level. An efficient network of canals drained seawater and prevented it from mixing with freshwater of the rivers.

Though the principles of sanitation and hygiene were not fully understood, and germ theory not yet propounded, the Dutch did something instinctively correct that prevented occurrences of cholera, plagues and fevers in tropical climate, where other colonists succumbed. When the British East India Company took over many of the Dutch forts, these sophisticated flushing systems were ignored and often filled up, because the British suspected these to be possible security hazard. As a result, the open drains and sewers in forts breed mosquitoes and rats causing cholera and other gastrointestinal fevers. In Galle today, the system is only partially functional; of the six drains, only three survive.