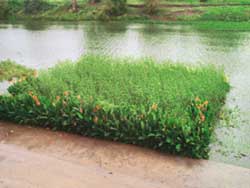 Municipal authorities in Indian cities have mastered the art of providing piped water at any cost -- the distances involved don't seem to matter at all. But at the same time, our municipalities appear clueless when it comes to managing sewage. 29,000 million litres of sewage is generated in the country everyday. Only 10 per cent of it is treated, the rest is conveniently dumped into nearby rivers and lakes. Dumping of untreated waste has wrought havoc upon many a water body. Excess flow of chemicals such as nitrates and phosphorous has lead to proliferation of algae in water bodies, leading to a decline in their oxygen levels. There have been some attempts to revive water bodies, but on the whole, these have been found to be too energy-intensive. The approaches rely on the round-the-clock use of expensive aerators -- fountains, which spray water upwards, increasing the dissolved oxygen levels in the process.Recently, however, S K Billore, professor at the Institute of Environment Management and Plant Sciences in Vikram University, Ujjain, Madhya Pradesh, has devised a cost effective technique to revive water bodies. Billore's method relies on artificial floating Islands (afi).

The islands are made up of local riparian reed grass, Phragmites Karka, which is known to draw away nitrogen and phosphorous from soil. The plants have a special root system which enable them to hold the organic waste and digest it as well. The reed grass also has a hollow shoot system which pumps oxygen into water, improving its dissolved oxygen level.

This process improves the quality of the water body over time. But Billore says, "Floating plants do treat wastewater, but they are rarely found in a quantities sufficient enough to treat the pollution load of our water bodies." "This gap has to be filled by eco-engineered afis," he adds.

In 2004, the Union ministry of water resources commissioned Billore to undertake a three-year research project, the main goal of which was to restore water quality of the river Kshipra in Ujjain. For starters, Billore's team installed a 200 sq m afi in the least turbulent part of the river. Floating islands are widely used in many countries including Japan and China, but Billore's project was the first of its kind in India.

In fact, the Vikram university professor had been working on the concept for a while. In 1994, he had treated wastewater from 400 households in Ujjain's Ravinder Nagar, using the reed bed system. The project's success spurred Billore to conduct more extensive research on reed beds. And in 2005, he upscaled the same concept to treat the Kshipra River. The scientist points out, "Kshipra is the lifeline of Ujjain, but now sewage from the fast growing city of Indore has virtually sounded the death knell of the river." He installed the eco-engineered afis in Kshipra near Jiwaji observatory where phragmites were grown in a 200 sq m float. The coir base was made using locally-available bamboo. Over a period of time, the root of the grass extended to more than a metre and its dense root system helped in arresting suspended organic matters.

This provides a congenial environment for the breeding of insects and micro invertebrates. The system became a house for micro and macro organisms, which started sapping up organic matters trapped in the root system. The root system became a home for beneficial bacteria, which improved biological processes such as the nitrogen cycle. The afi ecosystem enhanced the self-purification capacity of water bodies with oxygen surging through the hollow floating reed stem-rhizome-roots.

Prashant, a research associate of the Vikram university who monitors the impact of the floating islands, says, "The afi can effectively meet primary goals of removing nitrates, phosphates, suspended solids and bod by 50 to 80 per cent. Besides improving water quality, afis protect the littoral zone, improve the waterscape and provide a habitat for fish and birds." A comparative analysis of samples taken below the floating islands and from a distance, in March 2006, shows a considerable improvement in the river quality (see table Floating islands work). 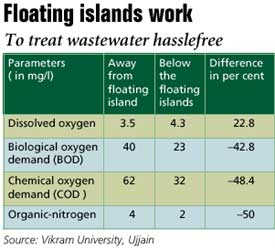 Creating floating islands of the kind devised by Billore means a one-time cost of around Rs 6 lakh. The system requires minimum maintenance. But it has a major disadvantage. During high currents, floods, or when the Kshipra is in peak flow, the floating islands have to dragged to the bank to prevent them from getting carried away by the river. This problem is, however, confined to floating islands in rivers. Islands in ponds do not face this problem. In June 2006, Billore and his team successfully implemented the afi system in the temple tank of Mahakaleswar temple to reduce the algae growth.

After his success in Kshipra river, Billore and his team developed a wetland system to treat wastewater at Ekant Park in Bhopal. The Ujjain university professor is today serving as a consultant for the Madhya Pradesh Government's Environmental Planning and Coordination Organisation project that aims to develop a wetland system that will treat wastewater sources from Bhopal city. Installation of this wetland is part of the Bhoj Wetland Project that aims to conserve and manage the upper and lower lakes of Bhopal.