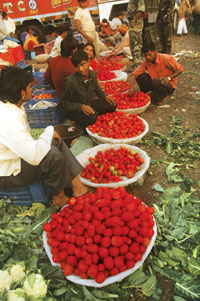 Foreign direct investment or FDI in retail has been sold to the country as a panacea for many ills. It is supposed to create jobs on a large scale, fight inflation by providing food at reasonable rates to urban consumers and also ensure better prices for farmers and other suppliers. But given the experience elsewhere, the Cabinet’s decision to allow 51 per cent FDI in multi-brand retail has raised the political temperature, divided economists and others like few other issues have.

At the heart of the controversy are two issues: will the entry of global retail chains lead to the closure of the neighbourhood grocery or kirana stores and, thus, lead to a decline in employment in a sector which provides work to 44 million people? This has been the primary concern of opposition parties (BJP and the Left) although the UPA government contends the entry of global retail giants will create as many as 10 million jobs in three years. And according to a study by the Indian Council for Research on International Economic Relations (ICRIER), the entry of organised retail did not entail major displacement; the rate of closure of small stores would be 1.7 per cent per annum. The 2008 report is the only large-scale study conducted on the likely impact of foreign retailers on all segments of the economy.

Down To Earth (DTE), however, is looking at the issue from another perspective that will impact millions more: whether farmers would, indeed, benefit from the opening up and if it would help bring down the inflation rate.

Chief economic adviser to the finance ministry Kaushik Basu has been the most persuasive salesman of FDI in retail, portraying it as the answer to a variety of problems that have been plaguing the country, inflation in particular. In a consistent defence of FDI as inflation-busting measure, the former Cornell University professor has been claiming that millions of the poorest people in India would be forced to pay more for staple items such as rice and vegetables if foreign supermarkets are refused permission to open in India. Referring to the government’s decision to allow 100 per cent FDI in single-brand retail and up to 51 per cent in multi-brand chains, Basu warns that without such investment “Indians will just have to get used to paying higher prices for food”.

In an earlier interview to a Delhi newspaper, Basu had said: “Our research shows that the benefit from FDI in multi-product retail will be enormous in terms of lowering inflation and enabling small Indian producers to export their products to retail outlets in industrialised nations.”

But to Jayati Ghosh, professor of Economics at Delhi’s Jawaharlal Nehru University (JNU), this is “a ridiculous argument”. In an interview to DTE, she points out: “Food inflation was relatively low in our country until 2006 despite high GDP growth (see graph). How come our traditional supply chains in food did not create such massive food price spikes earlier? We had the same faulty and inefficient system of distribution then, too.” There is no disagreement, though, among economists on the fact that reform of the Agriculture Produce Market Committees (APMC) Act and setting up of adequate storage and transport infrastructure for farmers to ferry their products to consumer centres would work far better. 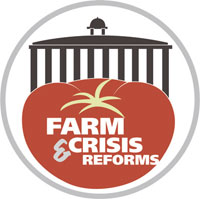 If organised retail is the dampener for inflation then it follows that countries such as the UK, Brazil, Thailand and Malaysia among others where the penetration of organised retail is high should have had minimal or very low rates of inflation. In the US where retail stores account for 83 per cent of the market share, inflation has not been so easy to control. Data from the Organisation for Economic Co-operation and Development (OECD) for the first quarter of 2011 reported food price inflation in the UK at 5.5 per cent and rising to 6.3 per cent in the third quarter of 2011.

According to a September 13 bulletin put out by the UK Office for National Statistics, the most significant upward contributions to the commodity price index came from food items such as meat, bread and cereals where there was a 7.1 per cent rise and much higher for processed foods. In India meanwhile, inflation is showing a downward spiral with food inflation down to 6.6 per cent from a high of 20 per cent, and Finance Minister Pranab Mukherjee predicts that if the trend continues, “we may perhaps have the year-end inflation at 6 per cent-7 per cent.” Food inflation has over 14 per cent weight in the Wholesale Price Index or WPI. 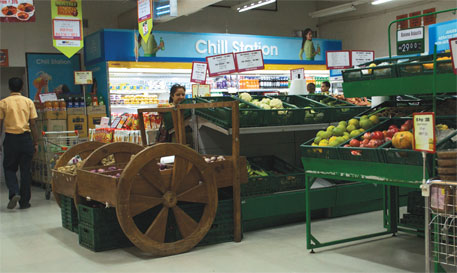 Modern retail chains invariably squeeze farmers’ margins and the cartelisation of purchases by the biggest chains has come under scrutiny in the EU and in the US. In the EU, retail chains have become “gatekeepers” controlling the only access that farmers have to consumers (see ‘Abuse of power by EU, US retailers’ p39). The trend in Asia is unlikely to be any different. A report of the Food and Agriculture Organisation (FAO) on the opportunities and risks posed by Asia’s supermarket revolution warns that the squeeze on farmers’ profit margins is likely to tighten as retail chains “become as concerned with safety and quality as they now are with cost”. It cautions that fierce competition among supermarket chains forces them to seek ever lower product and transaction costs and to minimise risk. This means the chains will not contribute to the kind of farm-level investments needed if small farmers are to participate in new markets. 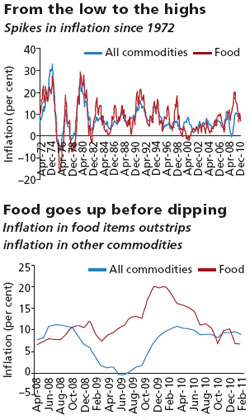 And what of the impact of global retail majors on Indian farmers? Already, Amul, widely considered India’s most valuable farm brand, has raised a red alert. It says the dairy farmers will suffer greatly. The Gujarat Co-operative Milk Marketing Federation and its managing director R S Sodhi point out that farmers’ price is beaten down by the efficiency rationale of modern chains.

Quoting figures from International Farm Comparison Network (IFCN) data, Sodhi says milk producers in the US received just 38 per cent of the consumer’s dollar spent on milk in 2009, down from 52 per cent in 1996, while in the UK it has dropped from 56 per cent to 38 per cent. In India, though, milk producers earn an average of 70 per cent of every consumer rupee, while those affiliated to cooperatives get as much as 80 per cent. It is unlikely that retail chains will be able to operate at 2 per cent distributor margin and 3 per cent retail margin as Indian milk companies do. Analysts also point out that the control that global chains wield over the supply chain allows them to dictate the terms to producers. This leads to a consolidation in farming operations, with chains buying from fewer large producers than from a vast number of small players. In India, where the average size of most farm holdings is a mere 1-1.5 hectares, the impact could be pretty grave on millions of farmers.

FAO says modern food retailing brings with it “fierce competition, reduced profit margins, demanding quality standards and procurement systems that focus increasingly on an elite group of ‘preferred suppliers’. In this sink-or-swim environment, many traditional fruit and vegetable wholesalers—and millions of small-scale producers—must either adapt or face exclusion from the market.”

The analysis prepared by FAO’s agricultural management, marketing and finance service (AGSF) finds that while most Asian consumers still prefer traditional outlets when shopping for fresh food, modern retailing is already altering the structure of fruit and vegetable supply chains in many parts of the region. “There is growing concern that modern supermarket procurement arrangements might result in unfavourable terms of trade for small-scale farmers,” says FAO marketing economist Andrew Shepherd. The worst part is that very little large-scale research has been done on the impact of supermarket development on Asian farmers’ incomes, and many policymakers are “ill-equipped to help farmers make informed decisions about their eventual fate in the marketplace.”