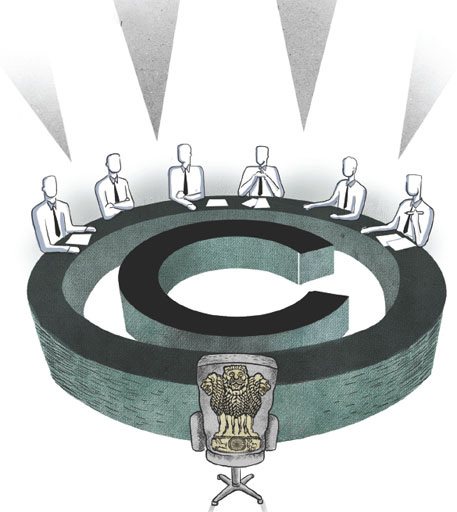 The politics of protecting intellectual property rights (IPR) is becoming more curiouswith the commerce ministry setting up a think tank to draft a national IPR policy while sidelining a committee of experts it had set up earlier. Annoyed academics who were asked to help formulate the policy in July this year have sent a letter to Prime Minister Narendra Modi complaining about the cavalier way in which they have been treated by the ministry.

The three-member group of professors who specialise in IPR law were drawn from top law institutes of the country. In July, Shamnad Basheer from the National Institute of Juridical Sciences, Kolkata, Yogesh Pai, assistant professor at the National Law University, Delhi, and Prabuddha Ganguli who holds the IPR chair at Tezpur University in Assam were asked by the commerce ministry’s Department of Industrial Policy and Promotion (DIPP) to prepare a base document to help formulate a national IPR policy.

After a round of meetings, the committee submitted a draft and suggested that it be put out for public comments to facilitate a wider discussion on what the contours of the policy should be. But that did not happen. In early September, Commerce and Industry Minister Nirmala Sitharaman announced that the government would for the “first time” come out with a policy on IPR to make it more robust.

Two weeks later, she tweeted that she had held “a brainstorming session with IPR stakeholders, experts and practitioners for a holistic IPR policy”.

According to an official source quoted by new reports, it was the first meeting in which stakeholders from different government departments to IPR practitioners and academics had taken part. The 21st September meeting did include the experts selected by DIPP. Although Basheer did not attend the brainstorming session, the other two did, but Pai told DTE that there was very little discussion on the content of the policy. “The minister said we should classify these issues into protection, commercialisation, enforcement, management etc. Our base document had not been sent to the DIPP then.”

Surprisingly, on 24 October, DIPP announced it had constituted a six-member think tank excluding the academics to draft the national IPR policy and to advise DIPP on IPR issue.

In their letter, Basheer and Pai say that DIPP did not inform them about the new development or respond to their baseline report. “We appreciate that governments often tend to work in mysterious ways, but it is beyond us as to why we were not even informed and had to learn about it from the press.”

According to sources, there is a difference of opinion in DIPP on how the new IPR policy should be framed and this is reflected in the two streams it has pursued. The more contentious issue is the composition of the think tank, which has been criticised in some quarters for the lack of independent experts with grounding in IPR issues. The exception is chairperson Justice Prabha Sridevan, a retired judge of the Madras High Court who has headed the Intellectual Property Appellate Board. While Sridevan’s credentials are impeccable, there is unease over other members who predominantly represent corporate interests.

Of these, two are Delhi-based corporate lawyers: Pratibha Singh from Singh & Singh Law Firm LLP and Punita Bhargava of Inventure IP. Both are said to be nominees of Finance Minister Arun Jaitley. Bhargava is his niece while Singh is a close family friend and wife of newly appointed additional solicitor-general Maninder Singh, a junior from Jaitley’s law practice. Singh, admittedly, comes with impressive credentials: she is a noted advocate whose firm represents the Indian pharmaceutical company, Cipla, which has taken on drug multinationals like Novartis in landmark patent battles.

In legal circles, there is also mention of Singh & Singh representing multinationals such as drug major Gilead and telecom giant Ericsson. A point of concern here is that the Competition Council of India which was brought into the dispute involving Ericsson had noted that the Swedish firm was the largest holder of standard essential patents with 33,000 such patents to its credit. Since there was no alternative to its technology, Ericsson enjoyed a monopoly that allowed it to demand exorbitant royalty fees from local handset manufacturers.

The most curious appointment to the think tank, though, is Rajeev Srinivasan, director of the Asian School of Business, Thiruvananthapuram. Srinivasan, who has had a long stint with telecom and software giants in the US, has not been part of the IPR debate. The same goes for Unnat Pandit from Cadila Pharmaceuticals of Ahmedabad. The last member and convener of the think tank is Narendra K Sabarwal, a retired deputy director general of the World Intellectual Property Organisation (WIPO), who is now chair of the IPR committee of the Federation of Indian Chambers of Commerce and Industry.

A well-known IPR analyst reflects the general reaction to the DIPP announcement when he points out: “Barring Justice Sridevan, who is the saving grace here, one cannot understand how such a think tank—if one can call it that—should be allowed to toy with our IPR policy. India’s IPR regime, which is embodied in its various legislation, has evolved over the decades to meet our development goals. If it is to be reworked, one needs members with a solid background in IPR policy issues and not individuals who represent corporate interests.”

The analyst, who works with a Geneva-based organisation and did not wish to be quoted, says the preponderance of corporate lawyers with possible conflict of interest is worrying, especially since the think tank has been tasked “to provide views on the possible implications of demands placed by the negotiating partners”. Many believe the setting up of the body at this juncture with such terms of reference could be construed as caving in to the demands of US business lobbies which have been campaigning over the past two years to get India to rework its patent laws.

The strongest pressure has come from the US drug multinationals who have roped in US Congressmen, the US trade representative and business lobbies to decry India’s IPR regime, particularly on the issue of drug patents. The campaign has zeroed in on certain sections of the patent law that makes it difficult for innovator companies to patent their drugs unless these meet certain standards on inventiveness and efficacy.

Against this backdrop, the commerce ministry’s mandate to the think tank “to highlight anomalies in the present IPR legislation and to advise possible solutions” could be interpreted as an admission that the US critics of India’s IPR regime are right, warns a lawyer working on access to medicines.

What is particularly dangerous is that the terms of reference also indicate that India is now amenable to the demands made by its trade partners, he adds.

The other concern is the WIPO factor. “WIPO is focused on harmonising intellectual property standards at the insistence of the Quad Group (the US, the European Union, Japan and Canada) which means higher levels of protection for IPR than required by the World Trade Organization,” worries a former diplomat who has had a stint with WIPO. His unease stems from the fact that the think tank has been tasked with advising the government on “best practice followed in foreign countries”.

Basheer says what is critical to the formulation of an IPR policy is to elicit a diverse range of comments from a wide assortment of stakeholders. But the overwhelming question is: will India bolster its intellectual property laws to protect its interests or jettison these for best practices elsewhere—practices that might not suit its development trajectory?