Diesel-fuelled vehicles have pulled down the ratings of companies 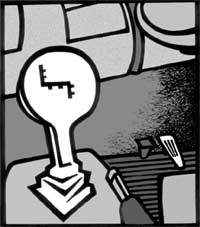 Fuels dictate emissions. As established by a number of international studies, grp too found the toxicity of diesel emissions far exceed that of petrol emissions. And vehicles fuelled by diesel have left most companies in the lurch as far as final ratings are concerned. Corporate fuel performance -- the proportion of total products produced by a company on various fuels -- has had a direct effect on the overall environment performance of products of the company. For example, almost all companies that have not done well were the ones that invested in diesel technology.

grp found that petrol passenger cars are far superior to the diesel passenger cars and multi-utility vehicles (muvs) in terms of their overall environment performance -- the top 14 passenger cars were petrol-driven. Contrary to popular perception, the project found that the carbon dioxide (co2) emissions from diesel is about 10 per cent more than that of petrol. And companies that launched models that run on cleaner fuels like compressed natural gas (cng) improved their ratings. For example, Ashok Leyland marginally improved its position due to its cng bus.

The reluctance of companies to think beyond diesel and petrol has more to do with the fact that profits dictate policies. The Union government's policy to subsidise a polluting fuel like diesel has encouraged companies to come out with more diesel models -- a policy that, in fact, subsidises human life. The only way out of this conundrum is for the industry to become proactive and invest in alternatives.