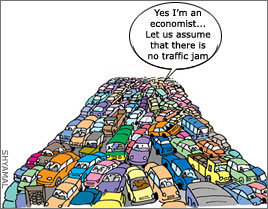 In our December 31, 2006 issue we raised some questions in the editorial, 'Economics of congestion'. Readers responded. Here is a cross section of views

The article raises a pertinent point the costs that automobiles impose on society. Economists, in principle, do recognise and accept this point but it has not been translated into actual policy. To my mind, this is partly because we do not have the numbers to factor costs into the price of each car, scooter or other automobiles.

Perhaps the only country that has come closest to pricing the full social cost of automobile use is Singapore.Here the cost of owning (and using) a car is many times that of its manufactured price.

In the Indian context, one can only see conflict between various ministries and contradiction between government policies. The National Urban Transport Policy, for example, talks of promoting public transport and non-motorised modes, but the country's industrial policy gloats about cars. Even the 'people-friendly' Marxist government of West Bengal is pushing for a Rs 100,000 car that will make matters worse.

There is another point, worth thinking about. The social costs of automobiles are not reversible--perhaps, only at great cost. We cannot easily switch to alternative modes after investing hundreds of crores in roads and flyovers. So the "road not taken" will come to haunt our future generations.

Let me add two more economic costs that automobiles impose on us.

The high incidence of accidental deaths by automobiles. Besides the vehicle owners, they take a huge toll on pedestrians, cyclists and commuters.

Research in the us suggests that the cost of operating a vehicle here is about 50 per cent of all costs roads, the legal system and other externalities. I am not sure about the cost due to death and injury, but they too are high.

India, sadly, still has one of the worst accident rates in the world.

Running a car in the us is very, very expensive. The direct costs are estimated at 19 per cent of the average American's earnings. This would nearly double if the true costs were factored in.

If our "capitalist" economies would only live up to their names and factor in the true cost of production of certain things, our societies would be a lot different--and healthier.

To the five costs you attribute to cars, we in the us have to add one more military expenses. One conservative scholar put the true price of gas in the country at us$11 per gallon, if we factored in the cost of us military operations in West Asia and elsewhere. It is currently us$2.3 per gallon.


What about health?
Clemens Reimann
Geological Survey of Norway

My country, Norway, puts environmental questions very high on its agenda. But even here it is surprising how little the car is questioned. Which other human activity costs 500,000 lives every year? Which other human activity spreads pollution over such vast distances? How come we are so concerned about smoking (and rightly so) but do never discuss all the exhaust from cars in urban areas? After all, this is the same air in question. How about all the other health issues like ever increasing rates of allergies and asthma, and the stress related to the noise and high traffic densities (living on a major road dramatically increases the risk of dying of a heart attack)?

All in all, it appears that human beings, as soon as they sit in a car, completely lose their ability to judge reality status and personal comfort (is it really?) suddenly becomes more important than any other issue. To an extent it becomes almost impossible to even discuss and question our use of the car.

As it is now most people in all countries around the world dream about their own car. Can this planet really afford another 5 or 6 billion cars?

Once, high taxes on fuel were justified on these grounds. Today, though, Sonia Gandhi and the Left would like to make petrol free.

Taxes on fuel should be high to meet costs of traffic lights, roads, police personnel, flyovers, pollution, health and road hazards. Parking space should be charged at full social cost instead of being related to fuzzy political notions of what is reasonable.

Some environmentalists may cry hoarse about social costs of cars. But how many of them will join me in demanding a parking charge of Rs100 per hour to meet full social costs? Our middle class wants all possible amenities but it balks at the thought of paying for the externalities.

The article has pointed out all this. But I disagree with it on one count. For most goods and services, the rise of demand will create a matching supply. So by no means can it be said that the lack of roads is an enlightened environmental response to possible pollution. If there were no subsidies and no monopolies, very expensive roads would come up--maybe built five hundred feet high to reduce pollution and congestion--that would meet all demand but only at a price that covers full costs.

The problem of congested roads occurs only because of the unwillingness of politicians to cope with the consequences of full pricing.

The questions raised in the article have been asked more often by economists than by engineers. Public goods, missing markets, externalities, inter-generational equity are all concepts designed to address precisely the type of problems that you have raised. Even on issues of measurement, most seminal work on correcting environmental disservices has been done by economists.

The polemics between economics and ecology are totally counter-productive.Economics profession, under the influence of Joseph Stiglitz, Kenneth Arrow, Karl-Goran Meyer and many others is today taking on board the insights of ecologists.

But I see little sign of any reverse flow of understanding.

The government should restructure revenues generated by the sales of vehicles. The government claims some excise duty as well as service tax. There are area development taxes, road taxes and a handsome amount of service tax as well. But none of this adds any substantial advantage to the infrastructure in this country.

My suggestion is that a fixed percentage of the showroom price of vehicles should go to infrastructure funds. The departments concerned with infrastructure and road safety should get this money directly, rather than waiting for the Union ministry of finance to disburse it to them. The automobile companies which are churning out vehicles by the million should pay for the non-renewable space.

It is quite sure that the finance ministry and some others will raise their eyebrows but, mind, this will only mean money well uitilised.