An NGO in Barmer has launched Tharparker animal breed improvement programmes in Minjrad and another village in the district. Two pure Tharparker bulls were brought in, one each from the two government breeding farms, to maintain diversity within the stock... 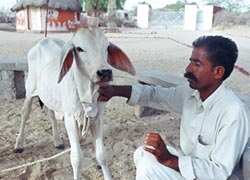 Durjan Singh Soda remembers how, two decades ago, he used bullocks to plough his fields in village Minjrad in the Chohtal tehsil of Rajasthan's Barmer district, bordering Pakistan's Sindh province. "In this part of the Thar desert, it is much better to plough the fields with bullocks. The spacing of the seed is much better and nutritious grasses don't get uprooted," he says. While this desiccated land spurns agriculture, nature has blessed it with highly nutritious grasses like sewan (Lasiurus sindicus). It is hardly surprising that it is also the native tract of one of the most celebrated cattle breeds of the sub-continent -- Tharparker, named after a town of Sindh, now in Pakistan. (The breed is also called White Sindhi or Thurry.) The people of this region have traditionally been semi-agricultural pastoralists, relying on the nutritious milk of the Tharparker.

After partition in 1947, it became difficult for pastoralists to get pure Tharparker animals from Sindh. With the government promoting agriculture and tractors coming in, the best of the Tharparker breeding stock was not maintained, leading to crossbreeding with outside cattle. Villagers point out that they had cattle from Gujarat coming in as dowry, and the purity of their stock was lost. So much so that a few years ago, they realised that they didn't have a single pure Tharparker bull to improve the stock. In fact, the destruction of this breed came to the government's attention only recently, when two breeding farms were created to protect and distribute pure animals, one each in Ganganagar and Jaisalmer districts of western Rajasthan.

The Society to Uplift Rural Economy (sure) is a non-governmental organisation in Barmer. It launched a Tharparker animal breed improvement programme in Minjrad and another village in the district about two years ago. Two pure Tharparker bulls were brought in, one each from the two government breeding farms, to maintain diversity within the stock. Jay Kumar Verma, sure's project coordinator, says the next step was to either remove all the mix-breed bulls from the village or to castrate them. To mate their cows with the Tharparker bulls, the villagers have to provide them with one kg each of jaggery and concentrated feed. The village has got two half-Tharparker calves now. "The next step is to get pure Tharparker bulls from other places and breed them with these animals, thus increasing the Tharparker traits in the breeding line," says Bhagirath Soni, the project's veterinarian.

Why do the villagers want Tharparker cattle when there are tractors? They say that not everybody has a tractor, and many can't afford to even rent one for ploughing. Besides, Tharparker scores over all other cattle in this region in several ways. For one, it milks all round the year, unlike other cattle that milk only for a certain period after giving birth. The milk has higher fat content than other available breeds. "This breed has an excellent ability to walk for long stretches in the sand. We have very large pastures spread out over long distances that are grazed in rotation. To have cattle with stamina is important," says Soda, adding that the animals have a good tolerance to the extreme heat of the region, are resistant to several diseases, and can survive on very little food in lean days.

The breed's ruggedness also means that the bullocks are stronger, hardier and capable of carting more than 1.5 tonnes of load in extreme heat over 25 km in a day. "One of our bulls actually jumped over a wall that was four feet high," says Purkha Ram Suthar, a lab assistant with the project.

So how do they identify a pure Tharparker bull? The villagers know them -- whether it is because they haven't forgotten or because they have been instructed by the vet. Here are some: the tail touches the ground, the dewlap is prominent and well-formed, the meta-carpal bone (between the ankle and the knee) is very short and the horns are the size of human thumbs. Soda sizes up the tail of the half-Tharparker calf and expresses satisfaction. Will he ever use a bullock again to plough his field? He isn't sure. But he says his kids won't mind some good-quality milk.