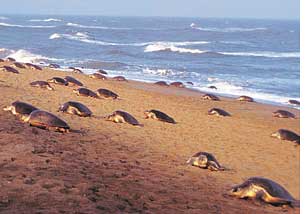 Olive Ridley turtles missed their annual nesting trip to the Orissa coast last year. Conservation groups blamed the upcoming port at Dhamra. The turtles are back this year, and port proponents Tata and L&T claim vindication. They overlook the violations that have allowed the port at Dhamra in the first place

On March 23, 2009, environmental group Green-peace International issu-ed a full-page advert in Financial Times and The International Herald Tribune to draw the world's attention to the Olive Ridley turtles--marine reptiles that come annually to the beaches of Gahirmatha in Orissa to nest. The advertisement drew on the hype around the cheap car Nano by Tata, the company building the port along with the L&T group, to raise alarm about the impact of an upcoming port on the endangered turtles.

The port at Dhamra is less than five km from the Bhitarkanika National Park; it is 15 km from the Gahirmatha Marine Sanctuary.The beaches are one of the world's largest nesting sites for the turtles. The turtles didn't nest there last year; this year's nesting season--from December to March--hadn't seen any turtles.

Unaware of the advertisement--and the talk of construction work driving the turtles away from the beaches where they breed--thousands of olive-coloured, heart-shaped shells emerged from the waters off the Gahirmatha coast. The turtles had arrived finally, said Jogendra Babaji, a fisher from a village near the national park. The turtles were seen floating in the inshore waters around sunset. "I could see some of them in the water. As darkness fell they trekked to the beach. First they came in hundreds and as the night wore on there were thousands," he said. Apart from a few curious fishers like him, the beach was deserted, he recalled as he narrated how each turtle picked a spot for itself.

The turtles levelled the area with their fore legs and dug out sand with their flippers. The pits were about one-and-a-half feet deep. They lay their eggs in the pits and covered them with sand. "If one doesn't see them laying eggs there is no way to know it's a turtle nest." After that the turtles returned to the sea, this time on a track different from the one they had used to come to the beach. The eggs would hatch in less than two months. Guided by the reflection of the sea, the baby turtles would join their kin.

While this cycle continued, from March 24-30, the Dhamra Port Company Ltd said the event vindicated their stand that the port does not pose any threat to the turtles. The company argued there were occasions earlier when the turtles did not visit the Orissa coast. Mass nesting did not happen in the early 1980s and the late 1990s. "The port construction started in late 2007," a company spokesperson said.

So, why didn't the turtles come to the beach in certain years? The answers are not known; there are only anecdotes. People in the Kendrapara district, under with the beach lies, say missile tests on the Wheeler island, close to the Gahirmatha sanctuary, and fishing ports could be responsible for the missing nesting years. But there are no scientific studies to back these conjectures. The state government, port authorities and conservationists--local and international--who claim the port disturbs the turtles have not carried out any study so far on the port's possible impact on turtles.

"Mass nesting does not occur due to weather or other disturbances," said Ashish Fernandes, ocean campaigner with Greenpeace India. "The Dhamra port construction could be an additional deterrent to mass nesting." The company had invited activists for talks to allay the impact of port on the turtles, if any, but the green groups are not ready for any kind of meeting till the company stops construction.

With talks in limbo, the port is now half complete. Violations in the clearances given to the port have not been debated publicly because of the impasse on the impact on the turtles. Take the example of the environmental impact assessment (eia) report. This leads to questions about another port project--in another place, at another time.


The Dhamra Port Company Ltd claimed to have all approvals in place before starting the port's construction in 2007. A Pune-based consultant wrote the eia report for the Dhamra port in 1997, when it was to be built by Internal Sea Port Pvt Ltd (see timeline Port shrift). Then, the port was to come up on Kanika island off the coast, near the mouth of river Dhamra. (It was proposed as an expansion of a fishing jetty that had been in place since 1978.) In 2004, the state government moved the location of the port to the mainland, close to the Gahirmatha sanctuary; it maintained this was merely a refurbishment of the old plan (see map). This was all the argument needed to avoid new studies and a fresh eia.

The new proposal envisaged a bigger port than previously planned--cargo handling capacity increased to 83 million tonnes per year compared to the 25 million tonnes per year proposed earlier (see table Bigger plans). In fact the present project aims to be India's biggest port (the Visakhapatnam port is considered the biggest at present; it handled 64.5 million tonnes last year). The eia notification, under which the port was cleared, does not allow such expansion. But Orissa government officials were vague when asked why a new eia was not conducted.

"The Orissa government did not get new studies done because it found the new site most suitable for a deep sea port. Besides, Dhamra is the expansion of an old project, so the question of a new eia does not arise," said A K Panda, the state's deputy secretary of port development. "We will see how the port affects adjacent areas after it becomes operational."

The state's environment secretary Bhagirathi Jena excused himself saying he did not know much about the issue. Pramode K Prusty, senior scientist in the environment department, said it would not be proper to split hairs over Kanika island and the mainland because "a port covers a large area of land". "Unless the project goes outside the ambit of the total area covered by the earlier port, there is no need for a fresh eia." On changes in specifications like cargo, he said he was not aware of it, but later added that it must be a "projected figure that does not entail a fresh eia unless the builders crossed the cargo limit mentioned in the eia".

If such an eventuality presents itself, there would not be the opportunity to go back in time and conduct another environmental assessment--the port would be up and running.

But the state government is not consistent in its definition of the project. A document of the state's commerce and transport department contradicts this it calls the project a greenfield project, that in common English means a project starting from scratch. A 2006 report on the scoping mission of the Dhamra port project also contradicts Panda and Prusty.

The International Union for Conservation of Nature (iucn) had prepared the report. It said "The new port significantly dwarfs the old port in terms of size and potential environmental impacts. In our view the port is really not an expansion of an old port, the two are not even adjacent." It also said the port would see a growth in industry in the area. "If the port becomes a net importer of raw materials, industries would want to be as close to the port as possible. While the port itself might be committed to environmental action, the secondary industries may not be so."

These concerns do not find a mention in the eia, which addresses the turtles in t wo of the 160 pages. The eia says the port site is not the nesting ground for turtles and hence won't affect them in any way. iucn disagrees "Turtle hatchlings are attracted to bright lights, and it is possible the...hatchlings will be misguided and head inland towards the port rather than offshore."

There is little mention of possible impact of erosion or dredging on turtles in the eia (see box Time and tide and erosion). iucn questioned the timing of dredging and whether dredgers would stop if a turtle is sucked up. It asked for a comprehensive environmental management plan. So the company commissioned in 2008 a study to the National Institute of Oceanography in Goa to find out if dredging would affect nesting beaches. The study would complete in May 2009; initial findings suggest erosion and accretion of the beaches is a natural process and an annual cyclical phenomenon and cannot be attributed to dredging at the port site.

iucn officials clarified they are not a regulatory body. They were there to suggest safeguard measures. Nicolas J Pilcher, co-chair of iucn's Marine Turtle Specialist Group, said mitigation measures work well and the company had taken a proactive stand in this regard. He added iucn brought the world's best science to the table, which would benefit the project.

"Turtles and ports can coexist. There is no scientific evidence to show that the port will cause a catastrophe. We have ensured dredging proceeds according to the best international standards," said Pilcher, who was part of the iucn scoping mission study. But conservationists do not buy the explanation because the mitigation measures are limited only to the Dhamra port site.

"There have been no impact studies on ancillary and downstream projects--ship building yard, steel plant, fertilizer plant--as a result of port," said a report by Sudarshan Rodrigues and Aarti Shreedhar of atree. "iucn perhaps realized since it is not feasible to abandon the project, therefore mitigate adverse impact that Olive Ridley turtles and their habitats might face," said a turtle expert who did not want to be named.

Samit Aiche, executive director of Greenpeace India, said, "It is clear that the eia for the port project is flawed. We have been asking for an independent eia which should consider aspects like erosion, lighting and dredging." He added port officials were ready to conduct studies, but without stopping construction. "That is not right." He said Greenpeace had not ruled out going to court. "We are negotiating with the company and will continue with our public campaign."

In 2006, the company approached wwf India and the Bombay Natural History Society (bnhs) to study if turtles were present at the port site.

The company then asked iucn to suggest safeguards to avoid any adverse impact the port might have on turtles during construction and operation. That is how iucn came into play. But its involvement was controversial as the Indian members of iucn's Marine Turtle Specialist Group alleged they were not consulted (see 'Conservationists divided over Dhamra port', Down To Earth, May 30, 2008). In a meeting with conservation groups on February 26, the company once again refused to halt construction work, taking recourse in iucn's mitigation measures.

"Tata's willingness to accept some environmental safeguards may have been an opportunity to mainstream some of these as regulations in port and coastal development. In the long term, this may positively impact the coast and turtles. But the process has to be consultative," said Kartik Shanker, marine turtle biologist at the Indian Institute of Science, Bengaluru. Regulations and safeguards assume greater importance because the state government is planning 11 ports, including Dhamra (see box Orissa plans 11 new ports). Orissa wants to be on par with other maritime states. It has proposed a single-window agency for development of ports and inland waterways.