Rise And Rise Of MFIs

Rise And Rise Of MFIs 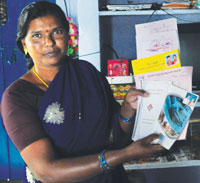 The total demand for micro-credit in the country has been estimated at Rs 50,000 crore. The Reserve Bank of India (RBI) estimates that in 256 of India’s 626 districts the credit gap is at least 95 per cent or more. Most mfis are concentrated in these districts, including two of the country’s largest—Spandana Spoorthy Innovative Financial Services Limited and Swayam Krishi Sangam (SKS) Microfinance.

The poster boy of MFIs, SKS is often lauded in microfinance conferences around the world. A not-for-profit MFI, it turned around, shed its inhibitions and became a for-profit, non-banking financial company and overnight acquired a million clients. According to statistics maintained by Micro-finance Information Exchange, Inc (Mixmarket), a non-profit business information provider in Washington DC, usa, from a handful of borrowers in 1998, when SKS started as a non-profit, it grew to have 5.8 million borrowers in 2009, making it India’s biggest MFI. The company website claims in 2010, SKS had 7.8 million borrowers. This dramatic rise has meant that the drift of microfinance is changing from social uplift to moneymaking. About 80 per cent of the total loans given out through MFI channels are by commercial NBFCs like Span­dana and SKS (see ‘Credit portfolio’).

Microfinance for the rural poor began when NABARD (National Agriculture Bank for Rural Development) initiated a pilot project in 1992 with about 500 women’s SHGs across the country. This was called the SHG-bank linkage programme (SBLP).

It was slow to start off. “It took 12 years for the first one million SHGs to be linked to formal credit,” said Vipin Sharma of Access Development Services, a Delhi non-profit providing technical support to the microfinance industry. Sharma said that the next one million was added in about 24 months. It was slow because due diligence was ensured before giving credit. The SHG- bank linkage programme still has the highest volumes in the country. SHGs are considered safer as lending is conditional to saving. Group saving is mostly used for productive purposes. In the case of MFIs it is only lending.

MFIs got into big lending in 2005-2006. Figures NABARD released show that till 2009, the outstanding SHG loans amounted to about Rs 23,000 crore, about twice the size of the MFI portfolio. But a report by Intellcap, a New Delhi consultancy group working in the social sector, said the MFI yearly disbursement overtook SHGs in 2007. Between 2006 and 2009 MFIs had 83 per cent annual compounded growth rate while that of SHGs during the same period was 41 per cent (see ‘Loans disbursed’).

Till the middle of this decade, there was only one for-profit microfinance organisation and about eight to 10 not-for-profit MFIs. According to a sidbi (Small Industries Development Bank of India) official, today’s big MFIs started as non-for-profit entities. “India’s two largest, SKS and Spandana Microfinance, both of Hyderabad, also started as non-profits. Later they turned into for-profit NBFCs,” the official said. Mixmarket reports that SKS started in 1998 with some 19 borrowers and till 2004 added 74,000. Spandana did better, from about 500 clients it reached about 386,000 in the same period. But they were small compared to Grameen Bank of Bangladesh, which had some 3.7 million members in 2004 (see below ‘The Grameen model’).

Around 2005-2006 MFIs began changing their stripes. They scurried to tap commercial markets and venture finances avowedly to ensure a wider credit net for the poor. Vikram Akula, founder of SKS, in a debate organised by the Clinton Global Foundation in September 2010, argued, “How do you design microfinance in a way so you don’t say no (to people who need credit)? By accessing capital markets and yes, commercial microfinance is an important tool for inclusive access.” He said this while arguing with Muhammad Yunus, founder of Grameen Bank and Nobel Prize winner, who discourages venture capitalists funding MFIs.

Akula’s statement echoes the majority view in the Indian microfinance market, including Vijay Mahajan of MFI Network who says that not accessing capital markets would have stunted growth. “The MFI model is the third attempt to reach the poor. The first one involved the moneylenders, the second, SHGs. According to a National Sample Survey Organisation survey of 2004-05, only 27 per cent of people in villages had access to formal credit,” Mahajan said. Both Akula and Mahajan agree that the only way to attract investors is to show them that the poor are creditworthy and can return a profit.

After economic liberalisation in 1991, a number of private banks emerged. “They had no effective infrastructure or resources to reach out to what would constitute the priority sector lending. They started to look at intermediate channels,” said Sharma.

Private banks, particularly ICICI Bank, began innovating to lend to a group of people who in some manner represented the highest returns after taking into account various risks. It introduced the partnership model where MFIs became an intermediary, servicing clients on behalf of the bank.

ICICI worked with more than 30 MFIs in India accounting for outstanding loans of approximately US $55 million in December 2004, Bindu Ananth a former ICICI microfinancier and now Institute for Financial Management and Research Trust president, wrote in Small Enterprise Development Journal. ICICI Bank’s annual report states Rs 34.17 billion was disbursed through micro-credit to about four million households in 2009. Industry reports suggest this helped MFIs to grow by 70 to 80 per cent. 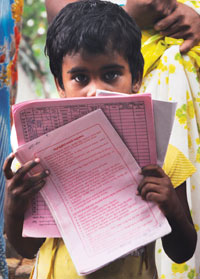 Partnership was a quick way of getting funds without any risk. According to Mahajan under this model, which is seldom used now, certain MFIs grew 10 times. It gave them capital to attract equity from private investors. Most big MFIs have private equity infused into them post-2006. This was the next stage of growth for MFIs. From 75,000 in 2004 SKS touched 1.6 million customers in 2007. Spandana too increased about fourfold to reach 1.19 million people.

Money from the market has led to dangerous competition. The top five MFIs of the country grew at close to 140 per cent in loan disbursal between 2008 and 2009. SKS and Spandana distributed 214 per cent more money in 2009 than in the preceding year. Their client base increased at 87 per cent and 104 per cent. Private equity funds did not enter Indian MFI till about 2007-08. Till then most of the equity that came in was from companies such as Bellwhether, Blue Orchard, Lok Capital, all microfinance focused funds and venture capitalists.

But the end of 2008 saw a new batch of microfinance equity providers with no history of investing in this sector. The Access report suggests that about five different deals worth more than US $80 million were conducted during the third quarter of 2008. These companies included Legatum, Sequoia and Sandstone. According to industry reports, SKS has been the biggest beneficiary getting about Rs 136 crore from these three companies.

MFIs are valued globally at about 1.4 to 1.9 times their profits. But in India, MFIs could attract equity three to four times their book value. With over 600 million people in India still without proper credit channels combined with high growth rates of customer bases, most of these MFIs recorded exponential growth. Indian MFIs were returning back Rs 20 to Rs 30 for every Rs 100 invested in them. To keep their investors happy and attract more investments, the MFIs had to expand in scale. To continue high profitablity the MFIs did not lower their interest rates.

SHGs lend at about 15 per cent. But MFIs may charge two to three times. According to industry sources, banks lend to MFIs at about 12 per cent interest and six to eight per cent is spent delivering the loan. But the companies used to charge as high as 60 per cent from borrowers. The RBI does not want to cap interest rates in NBFCs. MFIs say that capping the interest would make the trade unviable, restricting credit flow to the poor. Immediately after the Andhra government ordinance, finance minister Pranab Mukherjee requested the state government withdraw such capping provisions.

The easiest way to increase scale was to give multiple loans. MFIs have begun lending without verifying the repayment ability or assessing the number of loans the borrower already has, said Sewa Bank founder Ela Bhatt. When the SHG programme started, loans were distributed to increase the family’s income, said Bhatt. But now it has become just a business, she added.

K Natarajan, programme manager of New Delhi’s Sa-Dhan, an association of MFIs, said easy availability of loans is a problem, but added MFIs give quality service and variety of loans to suit customers needs. “Often loans from SHGs are not enough, that is when they go in for more loans,” he said. Loans to SHGs are linked with their corresponding savings, they are smaller than MFI loans, he said. A report published by Sa-Dhan in 2009 said, the average loan from an SHG was of Rs 3,800; a typical MFI loan was of Rs 6,500.

When MFIs started operating in the country, they followed a joint liability pressure structure like that of the SHGs but in this case the women’s groups were smaller—about five to eight. In case the women failed to pay a weekly installment others in the group had to make up for the lapse. Although most of the lendings are still to groups, new data shows that individual lending has also begun in tiny amounts, about one per cent of their total portfolio. 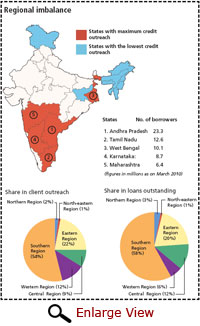 Karnataka, Kerala, Tamil Nadu and Andhra Pradesh led the market in terms of loans outstanding and clients. Of these Andhra has the maximum number of borrowers. In Warangal, where several suicides were reported, there are about 17 well known MFIs working; in Karnataka’s Kolar district, where borrowers refused to return loans in 2008, about eight MFIs are active. The rest of India, particularly northern and northeastern regions, have low penetration; about three per cent and one per cent each (see ‘Regional imbalance’,).

In Tamil Nadu the government has spent substantial resources and time on preparing SHGs to use the credit in a productive way. “The savings component must be emphasised to avoid repayment crisis like in Andhra Pradesh. This means a poor creditor should be treated as a productive investment rather than a mere customer,” said Kalpana Sankar, chief executive of Hand-in-hand, a major micro-credit, non-profit organisation in Chennai.

The poor need security, both economic and social. Microfinance was a tool to achieve this. But two decades later, this tool has malfunctioned with disastrous effect. The commercial MFIs’ race to make profits has overshadowed its noble beginning, plunging the poor into a death trap. Regulations are key to this sector. RBI, the apex regulator, has little control over them, especially on contentious issues like lending rates, recovery process and multiple lendings. The major MFIs claim that they follow a voluntary code of conduct to ensure borrower protection, but evidence from the ground suggests a failure. It is time to revisit the fundamentals of reaching credit to the poor and strengthen the tenets of SHG-based lending. The process may be slow, but it is not suicidal.
DTE Science and … DTE Science and … Life Science Insects Research US News News News Cover Story Cover Story Women Warangal (D) Rural Poverty Private Sector Poverty India Finance Economy Debt Cooperatives Andhra Pradesh
SUPPORT US