The non-government sector has come of age. Never before has it hogged the limelight as now, following the agitation over the Lokpal Bill. “Civil society has made national news for the first time. We have been in the headlines for three consecutive months,” says Amitabh Beher, executive director of the National Foundation of India, a non-profit in Delhi.

India has around 3.2 million registered non-government organisations (NGOs). Indians have more per capita NGOs than hospital beds. The Central Statistical Organisation of India states there are around four NGOs for every 1,000 people in urban areas and 2.3 NGOs for every 1,000 rural population. Their work spans a wide spectrum, from judiciary to legislatures to media. There is hardly any ministry that does not support or engage an NGO. Due to its wide reach it is often called the third sector.

The non-government sector came into prominence in the late 1960s when a new generation was maturing in post-Independence India. This was a generation that measured legitimacy of a political party according to its skills in meeting popular aspirations. 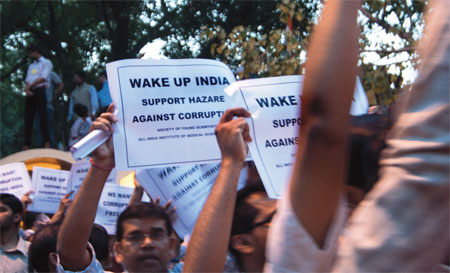 Historians say this was the period when India was getting restless with Congress’ two decades of uninterrupted rule. “The decline of the Congress occurred precisely when popular expectations had risen,” says Neera Chandhoke, professor of political science and director of developing countries research centre at Delhi University.

The big break for the non-government sector came after the national Emergency of 1975-77. For the first time, a non-Congress government, led by the Janata Party, had come to power. It was during this phase that civil society assumed political responsibilities. Besides creating an alternative to the Congress, Emergency also gave rise to a breed of civil society groups which supported a proactive political agenda. “The idea of civil society countervailing to the state began during Emergency,” says T K Oommen, social scientist and commentator on civil society. 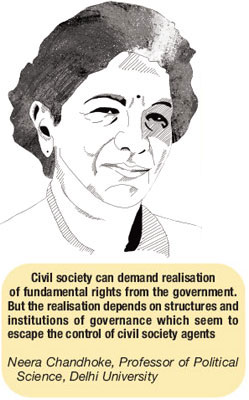 Emergency had meant a ruthless political clampdown through the suspension of people’s fundamental rights, which led to social struggles outside the political party arena. “This reinforced the belief that the party system was totally ineffective in representing political demands,” says Chandhoke.

The Janata Party had co-opted many of these groups. So, the new government pursued an agenda largely influenced by them. It was during this time that the seeds of legislation like the right to education and employment were sown in the government agenda.

The Janata Party experiment was short-lived. In 1980, the Congress returned to power. Over the next decade, the non-government sector saw a steady growth but with little government support. Relationship between the two was redefined as India began the course of liberalisation in the early 1990s. Experts say the impact of liberalisation on civil society was similar to that of Emergency.

“Economic liberalisation can be the new basis to explain the changing relationship between government and the non-government,” says Souporno Lahiri, an activist who works with many people’s movements in India. It redefined the relations between public good and private interest. Government downsized the roles and responsibilities of non-government groups and instead, favoured partnership with the private sector. That’s when the non-government sector reacted and “filled the development gap left by the government and market since 1990s,” says Mohamad Haleem Khan, the director general of CAPART, a government wing to support NGOs.

Post-liberalisation, the number of NGOs increased rapidly and over 70 per cent of the current organisations came into existence (see Post-liberalisation boom). “Foreign funding started flowing in as government started to promote them,” says Ajay Mehta, member of task force appointed by the Planning Commission on decentralised funding mechanism for the voluntary sector. “Terms like civil society and participatory development came in vogue along with liberalisation,” says Madhuresh of National Alliance for People Movement, an association of non-government groups. 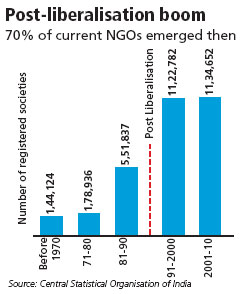 Liberalisation coincided with another development in India’s governance structure—adoption of the Panchayati raj system in 1992. The Constitution grants 29 local functions to panchayats. These were the functions on which NGOs focused. “So where would have the NGOs moved to? It involved makeover for some and looking for other works for others,” says Rajesh Tandon of the non-profit Society for Participatory Research in Asia. Many NGOs switched to advocacy. Many others got involved in empowering the elected panchayat representatives through government-supported schemes. Of late, foreign donors have also started supporting such works. “So now, from village to Parliament, NGOs are poised in opposition to elected representatives,” he says.

When UPA came to power in 2004, civil society entered into a new phase of political association. The series of recent empowering pieces of legislation—Right To Information, Forest Rights Act, Right to Education and rural employment guarantee Act—saw NGOs play a major role in their enactment. Each of these Acts has been preceded by years of local movement and intense negotiations with the government. An important change was taking place on the other side as well. The government was adopting a “right-based” approach to governance. 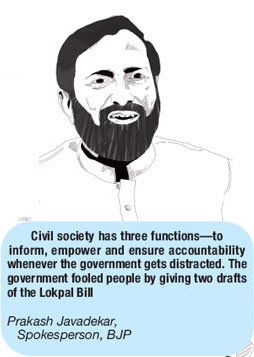 “Once the government’s liberalisation agenda is back, the inherent conflicts over resources and their use will also return. This is where civil society and the government will come into head-on collision,” says Tandon.

Pushpa Sundar of Sampradaan Indian Centre for Philanthropy, an organisation that encourages philanthropy, gives an interesting insight into the conflict. “Usurping legislative rights may not be right. Civil society cannot say it needs to be part of every legislation. During UPA-I, Sonia Gandhi usurped government’s role by favouring most of NAC’S decisions. This has led to a backlash in UPA-II,” she says.

“Initially, it seemed Anna Hazare’s anti-corruption movement was acceptable to the government. Binding social activists in committees and legislative processes is a time-tested strategy to confuse, confound and fudge. But the government is now fuming because Hazare has set August 15 as the deadline to enact the Lokpal Bill. Delay is a powerful tool of the state to deny rights, justice and accountability,” says Tandon.

But civil society has also indulged in an evident oversight. “Civil society organisations can lobby for and mobilise people to demand the realisation of fundamental rights from the government. But ultimately realisation of these rights depends on structures and institutions of governance, which seem to escape the control of civil society agents,” says Chandhoke.

The government-civil society relations appear to have hit the nadir. The political class termed the five civil society members of the Bill’s joint drafting committee “unelectable tyrants”. But civil society groups argue that despite being self-appointed, the work of NGO leaders is more open to public scrutiny.

In this context, the assertion of advocacy NGOs cannot be missed. These groups have confronted the government and the political class the most. They are also linked to international campaigns and networks which provide them instant global acknowledgement.

The changed scenario has prompted the government to set new conditions while engaging with NGOs. The government does not want civil society to have any say in formulating rules. For instance, its views are not being taken while drafting the land acquisition and right to food legislation.

This has created division between NGOs that take support from the government and “activist” groups which adopt aggressive policy postures. Community-based organisations and people’s movements also look upon both kinds of NGOs with suspicion. “Liberalisation has split us on the ground of money. Movements do not have money, but they form the core of any campaign for change,” says Madhuresh.