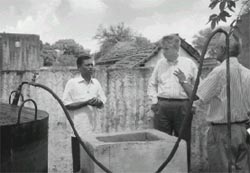 floods sweep through the village, the land is left uncultivable, the wells get filled with pebbles and mud. Agriculture becomes impossible. A cry of despair and despondency from the unfortunate residents would be a common sequel to this. Not in the villages of the Chaksu Block of Jaipur, Rajasthan. Thanks to the work of the Kumarappa Institute of Gram Swaraj ( kigs) .

The institute is named after the Gandhian economist, Joseph Cornelius Kumarappa. Established in 1967, it believes the village to be the "the basic unit of achieving the target of economics of peace and change in the social setup". Inspired by Mahatma Gandhi and Acharya Vinoba Bhave, it has used the system of g ramdan whereby people voluntarily transfer property rights to the village assembly and manage their resources collectively.

Having elicited views from the villagers regarding what their priorities were, kigs began with watershed management in the area, constructing tanks, contour bunding and deepening of wells. As sufficient land was not available, enough ponds could not be built. "We did merbundi (contour bunding) and built anicuts. With this the water was prevented from flowing out and the fields regained their regenerative capacity. The water table level rose," explains Awadh Prasad from kigs .

The fields were levelled. The farmers were made aware of the benefits of organic farming and they readily converted to it. But the crop yield came down. Overuse of fertilisers had altered the soil character. The soil had become dependent on external supplements. A changeover to organic farming lead to deficiency in this external aid to the soil.

But, with time, the soil regained its regenerative abilities. Now, organic farming is bringing the soil back to its fertile best.

kigs also advised planting green vegetables. It helped. One, the families got a nutritious diet. Two, they were able to sell the surplus and earn additional income. The holistic approach to development is evident. "We told them that -- self sufficiency in water, seed and manure, would make their lives better," says Prasad.

Mahila mandals (women's groups) were formed in the villages under the block, to help reorient the entire social ethos of the area. They worked as engines of economic and social development. An example is the decision the women's group enforced -- a minimum age limit of 18 for girl's marriage. The groups have also evolved a credit facility with each member maintaining a passbook and depositing a nominal amount every month. Money is now available to the people on loan for things like building houses. The organisation helped the people make fireproof low cost houses with roofs of locally available black and yellow soil.

And the decisions are made by the women's groups. The organisation only provides technical support. "Even the decision on the number of low cost houses to be built in the village is taken by the group itself," says Kalyan Sahai S harma, a kigs worker.

Pooja Devi, 25, head of the women's group of Bhagwanpur village, who even contested the local elections, explains that the focus today is on merbandi , compost gardening, literacy and drive to regreen the village.

kigs has also introduced the village to eco-friendly technology for fuel -- biogas. Households in the villages now use it regularly.

Today, a visit to these villages by people who have seen them in their days of degradation, will come as a pleasant surprise.

One may come across green fields, abundant water, sharing of the benefits by all sections of the community and women's participation in the socioeconomic recovery, all thanks to the investment the people of Chaksu block of Jaipur made in their environment. They took care of an ailing environment. In turn, they reap the benefits.