Risks yours, profits mine

Risks yours, profits mine

The way the Centre has designed tariffs for hydropower, the power-generating company does not bear the risks of hydrological changes like less flow or more silt in the river. They can get away with almost no generation, while conveniently pocketing an annual fixed charge for having a plant in place. The buyers--usually state electricity boards (sebs)--have to suffer the loss because they have to pay the fixed fee even if they do not get the desired electricity.

The company setting up a hydroelectric plant does not have to generate huge funds on its own because it is required to invest only 30 per cent of the capital as equity in the project. The rest is taken as loan from banks. The government not only pays the interest on loan but also a return of 14 per cent on equity. These payments are part of the annual fixed charge paid to the investor.The fixed charge also takes care of the cost of operation and maintenance, depreciation and interest on working capital. "For private companies states have their own norms but usually they follow Central Electricity Regulatory Commission (cerc) norms. We do not regulate tariffs of private companies," said a cerc official.

But capacity index is defined in such a way that the target can be achieved even if power generation is low due to less flow (see Amazing formula). If generation is low on account of machinery the company loses a part of the fixed charge. "Therefore, capacity index is just an indicator of machine availability. It is possible for a generating station to achieve a high index and thereby claim full capacity charge as well as incentive even when the actual generation has been low due to low water availability. In effect, the hydrological risk gets passed on to the beneficiaries," says the explanatory note for amendments in tariff regulations put up on the cerc website. The daily capacity index is on the basis of deemed generation as per the forecast of the water situation in the morning. 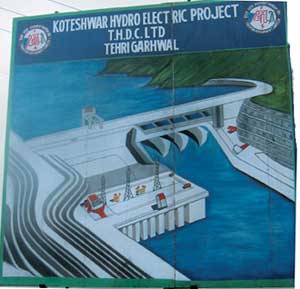 cerc is considering a change in tariff regulations. The amendments are said to propose equal sharing of hydrological risks between the power-generating company and the beneficiary. The new regulations will be implemented by 2009.


The current tariff structure makes hydel projects a good investment option but does not encourage maximum power generation or efficient use of resources. Take the case of Tehri. The dam is not able to generate energy as per its installed machine capacity because the Tehri Hydro Development Corporation claims the Central Water Commission has told it to maintain a lower storage level for safety. But the corporation is entitled to recover full charges from the sebs as it has the requisite installed machinery.

The Assam seb asked for a review of the tariff policy in 2006 after it faced shortage of energy.

The state had monsoon failure for two consecutive years due to which the North East Electric Power Corporation was not able to generate much energy. But as per the policy, it was supposed to pay the corporation full annual fixed charge.

Small wonder then that hydel project developers do not insist on accurate assessment of river flow or siltation rate? Since the flow data used at the planning stage is old, the actual generation is less than estimated (see graph Lost in generation). "Over 25 per cent of the storage capacity created in the monitored reservoirs (in India) has remained unfilled during the past 12 years and actual units produced per mw of installed hydro capacity are lower by over 21 per cent compared to 1994. Yet most dams and hydro projects are designed based on flows over the past 50 years rather than simulations of likely flows in line with observed changes in flow and climate," says Surya Sethi, principal adviser, energy, government of India, in a 2007 paper titled "Dialogue on Himalayan Hydrology".

"Projects are given clearance based on the promise of certain generation at 90 per cent dependability level (that is, they should generate that much power for 90 per cent of their estimated life), also called design generation. Based on the data for the past 23 years obtained from the Central Electricity Authority for the actual generation of power from existing projects, we found that 89 per cent of the existing projects generate at below the design level," says Himanshu Thakkar of South Asia Network for Dams, Rivers and People.

Sethi also points out in his paper that there are no optimization studies for individual river basins in India. Nor do any of the eias reviewed by Down To Earth take into account the performance of existing run of the river dams. All the projects are banking on maximum generation during the monsoon, whereas they say only one turbine will operate in the lean season. Maneri Bhali-I, operational since 1978, and Maneri Bhali-II, which became operational earlier this year, are facing problems due to siltation in the Bhagirathi. Guards at both the dams admitted the plants were not able to produce any electricity from July to August because of silt.

ntpc is building another project, Loharinag Pala, on the same river. Asked about the siltation problem in monsoons, an ntpc official said they would open the barrage gates of Loharinag Pala more often to flush out the silt. But flushing often will hamper electricity generation. "The Maneri Bhali-I problem is due to the fact that the barrage gates are above a two-three-metre-high wall, so the silt is stopped there. But at Loharinag Pala the gates are till the riverbed itself," he said. The fact is that despite having gates till the riverbed, Maneri Bhali-II had to stop operation during the monsoon.

Clearly, added capacity is not translating into more energy, but more profiteers.