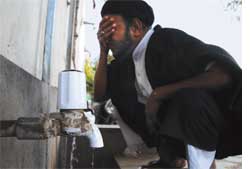 Maulana Talib Hussein does not find it easy to squat. Yet five times a day, the 64-year-old must get into that position to perform wudu , Arabic for the Islamic norm of cleaning.

“Wudu is one of the prescribed acts of cleansing Muslims must undertake before offering prayers,” he said. Hussein has preached the teachings of Islam for 34 years, and is Imam of a Shia mosque in a central Delhi locality.

The growing discomfort of using wall-mounted taps does not deter him from performing the partial ablution. Wudu—pronounced wuh-zoo in South Asia—gives a sense of cleanliness and lends itself to taharah or purity, an essential aspect of Islam, he explained.

An Australian company offers help for Hussein’s hamstrings and quadriceps. aace Worldwide invented an automatic wudu washer with an upper and a lower basin designed for convenience (see graphic). Founder and ceo Anthony Gomez conceived the idea during a trip to West Asia in 2006 when he noticed men lifting their feet into wash basins. He got cracking on the design.

Islamic scholars suggested caution on this figure. Liyaqat Moini, professor of history at Aligarh Muslim University who recently heard about the innovation, said there are other means to save water. “There are some people who use half a litre, whereas others may use half a bucket to complete wudu,” he said. “I am not against technological innovations. Let us not forget that the Prophet, peace be upon him, was clear that water be used judiciously,” he said. But while it is important to save water, there are limits, he added, referring to the US $2,000 price tag of a single unit.

The wudu washer facilitates the washing of the hands, nose, mouth, face, arms and feet. This mandate for wudu is written in the fifth chapter of the Quran. But not all Muslims have the same methods. Hussein points out the difference between the Shia and Sunni sequences. Shias, he said, wash from the elbows down to the fingers, whereas Sunnis do it the other way round. But the key difference, he said, is in masah, the cleaning of the head or feet. “We pass three wet fingers from the centre of the head down to the forehead, after which the fingers are passed from toe to ankle to clean the feet,” said Hussein. “The Sunni ablution sequence which washes the entire foot uses more water,” he added. The automatic wudu washer can be used for either sequence.

But the cleansing achieved from performing wudu can be achieved without water. The Prophet in extreme cases prescribed the circumstances to perform tayammum or dry ablution. “In certain cases where water is unavailable, unaffordable or inaccessible one can also use soil, sand or rub hands against an earthen wall,” said Akhtarul Wasey, head of the department of Islamic studies at Jamia Millia Islamia university in Delhi. Another case when the faithful may take recourse to tayammum is when water is polluted. “This was not an issue 1,400 years ago,” said Moini.

The wudu washer has been built in conformance with the teachings of the Quran. It has been certified by various authorities such as the Islamic Council of New South Wales and Al Azhar University in Cairo. In 2009, the company, which has a manufacturing plant in Malaysia with a monthly production capacity of 5,000 units, received orders from Qatar and Kuwait. The company is also in talks with the authorities in Abu Dhabi which is planning to revamp 3,000 mosques in the emirate. “It will make wudu a cleaner, convenient, and more pleasant experience,” said Gomez. The basins, he said, have a nanosilver anti-bacterial coating which will prevent skin, fungal and bacterial infections. The machine also has an in-built dryer for both the feet and upper limbs.

The technology is advanced no doubt, but let us not forget that most mosques are spanking clean, said Hasan Rahimtula, a non-resident Indian whose father was instrumental in reviving the Shia mosque by inviting Hussein to Delhi. “Our neighbourhoods do not represent the hygiene observed at prayer gatherings,” he added. Hussein concurs, “We have two persons scrubbing the floor of the mosque compound at all times.”

Such effort must be complemented, since wudu is a touchy subject, said Rahimtula. On a recent business trip he offered prayers in a mosque in Abu Dhabi which had installed dryers, albiet of a different kind. “I must admit it gives wudu a nice finishing touch,” he said. Rahimtula has seen a demonstration video of the innovation on the website Youtube. “I’m not sure how practical it is because you may be unable to complete cleaning in time.” The machine ensures the ablution sequence is completed in less than two minutes. At the end of the day it is a high-end product and could be used in select airports and clubs, he added. The firm has spent more than one million euros on research and development.

Rahimtula’s two sons, Hamza and Zain, have spent a few years learning Quranic verses at the mosque compound with Hussein. Cleanliness is related to the obsession people have for purity, said Zain. The Prophet is believed to have said: cleanliness is half the faith. “Surely this is in reference to more than just physical cleanliness,” said Zain.