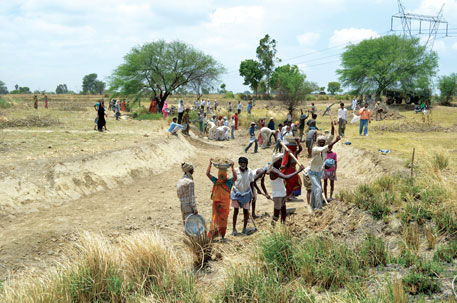 Thirty nine-year-old Ram Ishwar gave up farming to pull a rickshaw outside the railway station in Uttar Pradesh’s Fatehpur town. He says scarcity of water and a resultant increase in the cost of irrigation rendered farming unprofitable. Wheat production from his 0.4 hectare (ha) farmland shrank from one tonne to half a tonne in a harvesting season.

However, a unique initiative to revive the Sasur Khaderi-2 rivulet in Fatehpur district has given a ray of hope to the many small farmland owners like Ishwar in the district who were forced to quit farming.

The ambitious programme under the Mahatma Gandhi National Rural Employment Guarantee Scheme (MGNREGS) employed over 4,000 workers every day for over a month to de-silt of the dried up rivulet that once flowed into the Yamuna. The project, which is one of the biggest MGNREGS initiatives in the country, was executed between April 15 and May 31 this year.

Riding on its success, state agriculture production commissioner Alok Ranjan on December 2 asked the 70 district magistrates in the state to replicate the model in their districts to raise the groundwater table.

Fatehpur district, which is 150 km south of state capital Lucknow, faces acute water crisis despite the Ganga and the Yamuna rivers flowing in the north and south of it. The district also has several small rivulets and lakes, including Pandu, Nun, Rind, Bari Nadi, Chhoti Nadi, and Sasur Khaderi-1 and 2.

A remote sensing report by the state government, published last year, says the groundwater level in six blocks of the district is critical and it is semi-critical in seven others. The report has classified four blocks as dark zone, which is a region where the groundwater level cannot be replenished. Also, in the absence of a path for the rivulet, which acts as a drainage during monsoon, rain water floods surrounding villages, requiring evacuation every year.

Reacting to the problem, local authorities decided to revive the Sasur Khaderi-2 rivulet, which had disappeared due to siltation, prolonged drought and encroachment.

The authorities, led by the then district magistrate Kanchan Verma, decided to revive the 46-km rivulet that originates from a lake in Thithaura village and then carves out its course through four blocks of the district. The rivulet touches 42 villages before reaching the Yamuna.

In the first phase of the project, it was decided to de-silt the lake and 38 km of the rivulet. The length of the rivulet was divided into 38 equal parts and the depth of the rivulet was increased by 20 cm every 1 km to maintain its natural flow. Arvind Jain, executive engineer in Uttar Pradesh’s public works department, who worked on the project, claims 38 technical assistants, who were made in-charge of 1 km each, were trained to carry out the excavation. Labourers were deployed at an interval of 1.5 metres in three rows, he says. “A small island was also planned inside this lake which would provide shelter to the migratory birds,” says Jain.

Two of the biggest challenges of the project were to track the course of the rivulet and to take the people in the region into confidence for the project.

The district administration, in response to an RTI application seeking information on the course of the river in December 2011, admitted it had no documents to prove that such a rivulet existed.

Finally, the rivulet was chosen for revival on the persuasion of Swami Vigyananand and other local activists. Vigyananand, 58, has worked towards a pollution-free Ganga in the last decade. 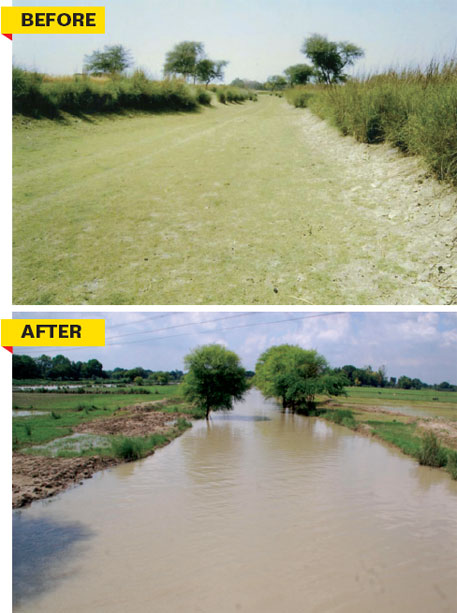 “The task was mammoth not only because of its size, but also because of the fear of law and order problem while removing the encroachment on the riverbed,” says Verma. The resentment to the project can be gauged from the fact that only 100 workers turned up on the first day of the project on April 14. It required over 4,000 workers. The district administration then carried out sensitisation drives to motivate the villagers to carry out the task. As part of the drive, over a thousand students from schools across the 42 villages volunteered to start the work as community service.

The project hit another roadblock when Thithaura residents wanted the boundary of the lake to be demarcated after excluding their farmlands. They said that instead of their farmlands, the project should include a 23 ha area adjoining the lake which is earmarked as pastoral land in government records. “Geographically, this pastoral land is a part of the lake. But government documents show it as pastoral land, so we cannot include it,” admits Jain. Angry panchayat members moved a no-confidence motion against Thithaura village head Prema Devi for siding with the authorities. “I finally approached the district magistrate who stopped the motion against my wife,” says Lal Singh, husband of Prema Devi.

The work had to be stopped on June 1, which was two weeks before the deadline, due to early monsoon.

The project became a success because the government departments worked in tandem under MGNREGS.

The irrigation department lent technical support to construct the canal, de-silt the lake and the rivulet. “Without their help, the project would have taken a long time,” says Harishchandra, the project director of the District Rural Development Authority, who supervised the programme.

The district land revenue department surveyed the land records to check encroachment and the forest department took up the job of planting 3,500 saplings around the lake.

“The computerised land record of the revenue department helped in precise demarcation of the rivulet’s path and in identifying the encroachers,” says Verma. 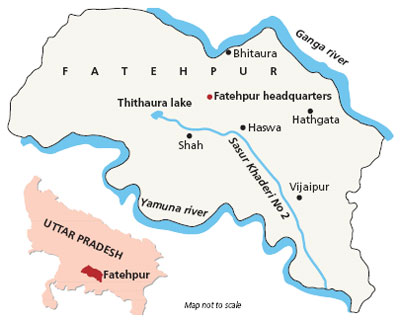 “Revival of this river would not have been possible without MGNREGS and the convergence of other departments,” says Harishchandra.

The scale of the project was so vast that villagers from panchayats in six blocks—Teliyani, Bhitoura, Hathganm, Haswa, Vijaipur and Dhata—were roped in for the project. Officials say most villagers had to travel long distances for the job and they were compensated for it.

The project also ensured that all MGNREGS guidelines, including arrangement for drinking water, medical facility and resting sheds at the work sites, were followed.

Harishchandra says village heads claimed the project lacked people’s support not only because they were against the anti-encroachment drive but also because payments are usually delayed in MGNREGS projects. Bank of Baroda volunteered to maintain bank accounts of the workers and transfer the wages every week. Nikhil Gupta, the Bank of Baroda official who worked on the project, says: “As I started transferring the money to the accounts of 100 labourers. The success spread like wildfire and the number of labourers multiplied every day.”

“As the project became big, we opened a bank kiosk at the Thithoura lake work site for updating bank records every day,” says Harishchandra.

Though the project is in progress, its impact is already visible. A government survey in August this year found that there was comparatively less waterlogging in fields during the rainy season.

Government officials say areas like Bhairwan and Phulwamau, which never grew paddy crop due to shortage of water, successfully grew paddy this year. The lake has already started retaining water. In July, the lake had 90,000 cubic metres of water. The administration also claims no village has been marooned due to flooding this year. Farmer Sukhdev Yadav says he normally grew paddy in 0.4 ha of his two ha because of waterlogging. “But this year, I grew paddy in the entire two ha.”

Somesh Bahadur a farmer of Rawatpur village, says he could cultivate his land because of the project. “This year, water stayed in the stream. We pumped it into fields when needed,” he says.

Dharampal, 32, who worked at the Thithoura lake site, claims the water level in his village has gone up. An excited Jay Narayan Singh of Hasnapur village says that after the success of the first phase of the project, the villagers “will organise a protest, if the new district magistrate does not complete the project”.

New district magistrate of Fatehpur Abhay Kumar says he plans to take the work to the next level. “I am consulting adjoining districts like Kaushambi and Allahabad to revive a few other streams which traverse across these districts,” says he.