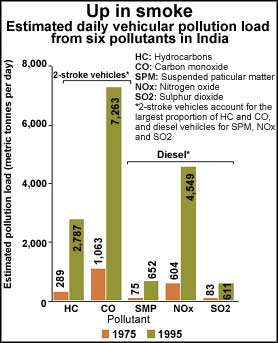 The automobile bug has bitten Indians. And why not? Hyundai, Daewoo, telco , Honda and Fiat, to name a few, are coming up with the most buyer-friendly (read diesel), not necessarily environment-friendly, cars. Besides the luxury cars being introduced by the world's top car manufacturers, there are of course the desi two-wheelers models which have registered a record increase of 22 times in the two decades under study. There is an attempt to dieselise the fleet of motorcycles also. Royal Enfield is trying to reintroduce its diesel model. Meanwhile, the government has not spared a thought for clean air. It advocates an almost unlimited use of diesel, and norms on technology -- imported or domestic -- are totally inadequate, set mainly to support industrial interests. The result: pollution load has soared by eight times in 20 years.

cse 's estimation of vehicular pollution load took into account data on the number of registered vehicles in India for different categories of vehicles, the daily use of these vehicles (km/day), fuel efficiency (km/litre) and emission levels (gramme/litre).
Results of the study showed that vehicles were releasing an estimated 15,862 metric tonnes (mt) of pollutants every day in 1995 compared to 2,114 mt in 1975. Carbon monoxide ( co ) topped the list, followed by nitrogen oxides ( no x ), hydrocarbons ( hc ), suspended particulate matter ( spm ) and sulphur dioxide ( so 2 ). hc levels were 10 times higher in 1995 compared to the 1975 level (see chart: Up in smoke ).

The dramatic rise in two-stroke vehicles, which include two and three-wheelers, is responsible for the large quantities of hc and co in the atmosphere. In 1995, there were almost 21 million scooters in India compared to just 946,000 in 1975 - 22 times more than the number in 1975. Most of these two- and three-wheelers plying on Indian roads are supplied by Bajaj Auto Limited. The company has a virtual monopoly over the two-stroke market in India (see box: Wheeler dealer ).

In 1975, 42 per cent of the vehicles on the road were two-stroke, but, in 1995, their number went up to a whopping 73 per cent (see chart: Sharing highways ). In these two-stroke vehicles, nearly 20-25 per cent of the petrol remains unburnt, thus releasing the pollutants directly into the atmosphere.


Besides two-stroke vehicles, the dramatic rise in vehicular pollution load is due to the unimpeded increase in diesel consumption. The rise in spm , no x and so 2 is especially due to diesel emissions. Recent studies have confirmed diesel's extreme toxicity. It has been proved that diesel emits 100 times more toxic particulate matter than petrol. Particulate matter from diesel is extremely small. Hence, it penetrates deep into the lungs and stays there for many years. Particles less than 10 micron in size ( pm 10) are the most deadly and have been associated with a high incidence of chronic lung disorders. Despite all the data available on the ill-effects of diesel use:
- India is the only country in the world which uses seven times more diesel than petrol;
- Diesel consumption quadrupled from 1980 to 1994;
- In Delhi, consumption of diesel has completely overtaken that of petrol. Between 1991 and 1996, it went up by 60 per cent compared to 34 per cent for petrol. A study conducted by the Central Pollution Control Board ( cpcb) shows that in Delhi, nearly 40 per cent of the spm on average is pm10 or smaller.
- Though the quality of diesel used in Delhi is much better than any other Indian city, when compared to the best diesel available in the world - Swedish diesel - its sulphur content is 250 times higher.

Particles emitted by diesel are coated with highly carcinogenic polycyclic aromatic hydrocarbons ( pah s ) . Even the World Bank, Air Resources Board of California and Germany's ministry of occupational health have categorised pah s as carcinogenic. Recently, one such pah , nitrobenzathrone, was analysed by Japanese scientists to be the strongest carcinogen found till date. Another powerful mutagen known to exist in diesel is 1,8 dinitropyrene.

The government has, however, encouraged the use of diesel by lowering its cost substantially compared to petrol. And there is talk of reducing the price further. Besides, there are no emission norms for diesel vehicles and no question of improving engine technology. At the current rate of growth of pollution load, "air masks" will soon become a medical necessity.