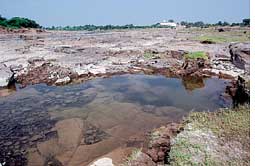 Farmers of Wadwali village in Maharashtra are keeping a lookout for sand mining contractors who often come there to excavate the Godavari's sand and sell it to the construction industry in Pune and Nashik. In December, a group of farmers began a fast to protest indiscriminate sand mining and eight of them had to be admitted to hospital. This forced the Aurangabad district administration to set up a committee to look into farmers' complaint that excessive and unscientific sand mining in their area had led to acute water scarcity, which in turn was ruining crops. Although the committee gave a green signal for sand mining, fear of angry farmers is keeping contractors at bay.

The district administration first noted farmers' complaints on November 4 when 50-year-old Laxman Aute of Wadwali in Paithan tehsil tried to immolate himself in front of the collector's office.A policemen foiled the suicide attempt before he could strike a match. On November 1, Aute and 16 other farmers from in and around Wadwali had submitted a memorandum to the collector demanding sand mining be stopped in their area and had threatened immolation. Ignoring their protest, the administration auctioned seven sand belts along the Godavari, Anjana, Purna, Shivna and Gandhari rivers in Aurangabad. By doing so the district grew richer by Rs 11,563,000--but at the cost of its farmers.

The administration does not bother to monitor the way mining is carried out and the troubles it leads to, say farmers. "Most contractors don't abide by the quantity of sand allotted to them. Rivulets have disappeared and one can see rocks in place of sandy riverbeds that help retain water. Groundwater is depleted and rivers shrunk. We have suffered crop loss since there is no water for irrigation," said Aute.

The district administration is quick to shrug off the responsibility. Said A B Kamble, district sand mining work officer "Gram sabha resolution is mandatory for the auction of sand belts. If villagers do not want sand mining, they should not pass a resolution." But Wadwali sand belt was auctioned without the gram sabha resolution. "This year gram sabha was not held. The sarpanch and other office bearers took signatures of only 108 of the 2,500 residents," alleged Raut.

Villagers say until a few years ago the Godavari would be full till its banks, but today it has shrunk, though official data shows much more water is released than earlier from the Jayakwadi dam. Water level in the wells is dipping. Tehsil records show that of 188 villages in Paithan, 143 have come to depend on tankers for drinking water, said villagers.

Most farmers have stopped cultivating water-intensive sugarcane and banana. Said Ashok Gonde of Wad- wali "Till 2005 I had four hectares (ha) under sugarcane but now I have shifted to cotton." Ashok Raut, another farmer in Wadwali, is in the same boat. "A few years ago I had 2 ha under banana and 1.2 ha under orange plantation. Now I grow cotton, pearl millet (bajra) and tur. My well has dried up. From a prosperous horticulturist, I have turned into an impoverished farmer dependent on rain," lamented Raut. Some farmers have taken loans of over Rs 5 lakh and laid pipes to bring water from far away.

Rocks jut out in the excavated banks of the Godavari near Wadwali. "As per rule sand mining should not go below one metre of the surface, but here they have dug the river basin deeper than seven metres," said Aute. Most contractors are ready to pay much more than the minimum government price for sand. Vaijapur tehsil's sand is the most preferred. This year Harpalsing Bajwal, a Nashik-based contractor, bought 3,500 brass sand (a brass is enough to fill a 10x10 feet pit one foot deep, or 2. 83 cubic metre) in Dakpimpalgaon belt in Vaijapur by paying Rs 28.5 lakh when the government minimum price was Rs 13.4 lakh. Another contractor Kiran Patil paid more than 10 times the minimum price for Avvalgaon sand belt.

"There is no time limit specified for mining. Contractors can mine a belt in one day or one year. Truckers carrying the sand do not carry transit pass," said Aute. When Down To Earth asked people mining sand near Wadwali for permit, they could not show any. Said Aute "This has been going on for 20 years. Contractors are allowed to fill two brass sand in a truck, but they fill over four."

Kamble said it was for the tehsil office to issue and check transit passes to truckers. Even when raids are conducted, truckers get away by paying a fine. On December 5, officials of Gangapur tehsil caught 67 trucks near the Shivna and handed them over to the police. Of them, 44 truck owners paid a fine. And the rest? They ran away with their trucks.