About 2,000 years ago, when the Romans ruled London, they gave the city its first centrally-heated homes. A look back in time 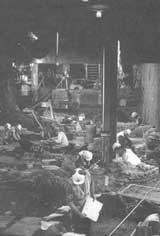 BENEATH the streets of London lie the remains of Londinium, an outpost of the only empire to run Britain from abroad, say archaeologists from the Museum of London. The course of a long-disappeared river and the truncated foundations of a massive arch, which straddled a Roman road, have been unearthed beneath what is now known as Newgate Street.

For 150 years now, archaeologists have been exploring this Roman city. Earlier, they had found remains which indicated that the Romans had central heating for their homes. Late last year, they found foundations of a Roman arch at a site near the Old Bailey (a famous criminal court on the city's edge).

"The arch is likely to have been monumental and was probably made of stone and covered with decorated marble. Beside the newly-discovered arch ran a small river, which seems to have been cut off by the construction of the wall and diverted into a ditch, along with other streams disrupted by Londinium," says Bruce Watson, an archaeologist at the Museum of London Archaeology Service, involved in the excavation.

The Romans arrived in England in 43 AD. Londinium did not really exist until then. The river port was then at the first point inland along the river Thames where the banks were bridgeable, the estuary downstream being wide, flat and marshy. According to Watson, "Quays were built at Londinium in the middle of the first century AD, when Emperor Nero ruled Rome. At a commercial hub, Londinium's new wealth was spent on monuments and public buildings." Soon it was fashioned with classic Roman architecture, with courts, temples, baths, markets and even an amphitheatre.

"From 50 AD the Newgate Street was a 'ribbon development' from central Londinium, consisting of shops and workshops. It was abandoned when the Romans left Britain around 400 AD," he adds. So far, only the southeast side of the arch has been excavated. The other foundation may lie under a row of shops with cellars, more likely to be refurbished than redeveloped. The foundations are so truncated that archaeologists are wary of making strong statements on limited evidence.

They say the Romans built a wall around the city in 200 AD. This wall was constructed at the expense 4 the arch. The city wall is still visible today in places around London. They also found a ditch under the old post office . This lay outside the city wall into which the diverted rivers ran when this wall was built blocking their former courses.

The Romans would go to the baths, possibly watch fighting in the amphitheatre, and participate in civic activities around the market area. They would also honour Roman gods.

The Romans set up the first central heating systems in the British Isles: running pipes of hot water below the floors of buildings. The average house of a Roman in London would have between one and four rooms. These rooms were heated by a single fire on the floor of one of the larger rooms. Most of these houses were timber- framed, probably single-storey high with thatched or tile roofs. Mud brick was also widely used as building material, as there was a shortage of building stone in London. The Romans also built underground heating systems called hypocausts. This comprised a series of pipes running under buildings' floors, through which the heat generated from the adjoining stoke pit was ducted. Hypocausts were only found in villas, palaces and public buildings such as bath-houses.

The Romans had slaves and did little work themselves. Soldiers built the long straight roads and marched upon them for 30 miles a day, often carrying with them all that was needed for a fortified camp. On retirement, soldiers were rewarded with farms on land that they had helped to claim for Rome.

Centuries of development have accumulated some three-to five metre-deep archaeological deposits. These mainly consist of mud brick or stone walls, occasional wells and rubbish pits. "Reuse of valuable stone from the foundations of old buildings has left the 2,000-year-old history of London scattered. The site where the arch was found was accessed when one modern office block was demolished to make way for another," says Watson.

The Romans had stabilised their territory in Britain by second century AD. Despite unprecedented infrastructure and military strength, they gave into the pressure from the Scots from the north, Celts from the west and Anglo-Saxons from the east. This, combined with civil wars, drove the Romans back after 350 AD. However, they left behind the ruins of their architecture and hoards of coins.

Today, the Roman wall is mostly invisible and, other than the Thames, the city's rivers flow through tubes beneath the ground. The financial hub of "the city of London" is now defended by its own armed police force.

A small pair of dragons guard every road entrance to the United Kingdom's heart of global finance. These boundaries to wealth and power may not be as obvious as a wall or a massive monumental arch, but to the people of Britain and beyond, the power incarnated in the institutions of the city remains as overwhelming, yet ultimately fragile, as any other empire.