Adulteration is an effect of warped pricing 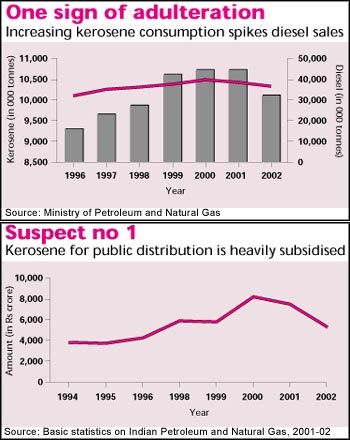 A wide variety of low priced fuels and solvents in the market are an immediate enticement to greed. High taxes on petrol make it vulnerable to adulteration with cheap solvents and naphtha. Diesel is easily mixed with subsidised kerosene and cheaper LDO. Says Rita Pandey, Fellow, National Institute of Public Finance and Policy, "The difference in duty structure is the main motive for indulging in adulteration. Any rationalisation of duty structure could help in at least reducing adulteration cases."

Tax policies work at cross-purposes. To increase domestic availability of kerosene and reduce the scope for its unauthorised diversion from the public distribution system (PDS), government introduced a parallel marketing scheme by decanalising kerosene. Today, private persons/agencies can import kerosene and sell at commercial rates. April 1, 2002 onwards, the customs duty on imported kerosene was reduced from 35 per cent to 20 per cent to support the scheme. But this cheap kerosene has become the most attractive adulterant.

Oil refineries are incensed. While diesel sales increased by only 0.6 per cent in 2002-03, cheap kerosene imports shot up by 130 per cent. Between 2000 and 2003, kerosene imports more than doubled: from 0.30 million metric tonnes to 0.69 million metric tonnes. Alarmed at this trend, in August 2003, the Standing Committee on Petroleum and Chemicals recommended a ban on the import of kerosene oil and a higher sales tax, to stop adulteration.

In a letter to the Union Ministry of Petroleum this August, IOC Chairman M S Ramachandran urged a hike in customs duty on superior kerosene oil (SKO) imports to 35 per cent -- it is 20 per cent at present. "It can be inferred," he wrote, "that imported SKO (non-PDS) is not being actually utilised for the basic purpose that it is being imported for, that is, use by households." "One of the primary reasons for the significant drop in high speed diesel (HSD) sales," the letter argues, "could be due to suspected large scale admixing of HSD with SKO (non-PDS) being imported by the parallel marketers. While some retail outlets may be indulging in admixing HSD with SKO, we believe a large number of customers including truck operators are buying SKO (non-PDS) for mixing with HSD".

But for any kind of impact on adulteration, it is important to narrow down the price difference between kerosene and diesel. Currently PDS kerosene is priced around Rs 10 per litre, while diesel sells at Rs 22. Last year (2002-03), the subsidy on kerosene was a whopping Rs 30,180 million.

The petroleum ministry has sought alignment of the tax on light diesel oil with that on HSD. An additional excise duty of Rs 1.50 per litre was finally imposed on light diesel oil during the current budget. But there are too many cheap adulterants in the market and fiscal correction for all of them seems impossible. There are also trade-offs with regard to the end use of many fuels. A hike in the duty on naphtha, for instance, could greatly impact the petrochemical sector rather than reducing adulteration. These are serious glitches in fiscal reforms. Still, it is possible to narrow the margin of difference between key adulterants. As Shreekant Gupta sums it up, "Strange challenge indeed. The tax system is at the root of the problem. Yet there are limitation to the extent one can play around with fiscal strategy to address this issue."


The government incurs huge losses every year on account of fuel adulteration, a scenario exacerbated by skewed pricing: Rs 1,00,000 million every year, by a conservative estimate. To this, add the investment on vigilance infrastructure by oil companies and state agencies, and the damages consumers and automobile companies pay on account of adulteration. Against such huge costs, the defaulter, if caught, pays a pittance of Rs 20,000 as a penalty!

The track record of penal action is dismally weak. Action taken on retail outlets between January 1, 2001 and December 12, 2001 by IOC shows that out of 18 penal cases, 3 dealerships were terminated while the rest were still operating after completing the suspension period of 15 to 30 days. Out of the three terminated, two were operating under different names.

The penalty system is defined in the marketing discipline guidelines of the ministry of petroleum and natural gas. But these aren't legally binding. Unbelievably, and in the face of severe criticism, the ministry brazenly modified the guidelines in 2001, weakening them further. The earlier penalty fees of Rs 1,00,000 and suspension of sales and supplies of all products for 45 days for the first offence of adulteration, has been lowered to Rs 20,000 and suspension of supplies for 30 days.

Contrast this with what the United States Environment Protection Agency does. The maximum penalty for violation can be as high as US $27, 500 per day (Rs 1.34 million) per violation, plus the profit the violator would have made from non-compliance.


There are some feeble efforts to plug the loopholes in the illegal adulteration trade. One way of doing this is to track the use of all fuels and solvents obtained in the market. The government has issued two orders under the Essential Commodities Act, 1955 to keep a close vigil on the use of naphtha and solvents and to curb their misuse:

• The Naphtha (Acquisition, Sale, Storage & Prevention of use in Automobile) Order, 2000, and

• The Solvent, Raffinate, and Slop (Acquisition, Sale, Storage & Prevention of use in Automobile) Order, 2000.

The naphtha control order was enforced in November 2000. But the solvent order went into typical bureaucratic delays, following strong representations by various chemical associations and a stay order from the Hyderabad high court. The bone of contention was how a 'solvent' could be defined. When a task force was set up to define solvents, for inexplicable reasons it narrowed down the number of solvents to be included in the order. In November 2001, the revised order was officially issued, much watered down.

Another serious loophole is the exemption granted to small-scale users to use 50 litres of solvents. Perhaps this explains why, at the Bijwasan depot, pilferage happens in 50 litre cans.

Naturally, these orders have made no difference. These regulations demand that the user of the listed solvents obtain a license and file end use certificates. The onus is thus on the user to prove the legality of the product. The regulator does nothing to monitor the actual practice in the field. The regulatory net is designed to let defaulters escape with ease.

The trade beats the system with ingenuity every time the government finds a way to detect adulteration. At the behest of the Oil Coordination Committee, for instance, kerosene was dyed blue for easy detection. But the antidote for blue dye is already available. Subsequently, even doping kerosene with furfural, a marker, was too unstable to be reliable. In any case, coding only kerosene doesn't help, for too many other adulterants exist.

The latest technical approach under experiments now is an electronic marker. The marker is a unique combination of chemicals that covertly marks prime fuels. The basic principle is simple. The marker is mixed with fuel in the proportion of 2.5 parts per million -- a measure of the ratio of the chemical to the fuel. It is read through a portable digital analyzer to detect any dilution.

HPCL uses this technique in Mumbai. Other oil companies are resisting it. They are raising doubts: How can constant dosages be maintained at low concentration? What about leaching? Can it be laundered? A logjam once again.


The Supreme Court of India had warned in its order of April 5, 2002, "merely lowering the sulphur and the benzene content in diesel and petrol respectively will have a little effect unless the oil companies can guarantee that the fuel sold from dispensing stations is pure and unadulterated." Currently, accountability and responsibility and even penalty are fragmented along the fuel supply chain. Oil company's responsibility ends at the terminal point. The onus shifts to the transporters and the retailers when malpractices occur. If the companies are not held responsible for the quality of the end product their surveillance will always remain slack and perpetuate adulteration. In the US and Europe, after years of adverse publicity, oil companies have become more image-conscious. To protect their brand name, they take the business of checking adulteration seriously.

Even the Mukhopadhyay committee acknowledged this issue: "in Europe currently, National Standard Bodies carry out quality checks. Failure cases lead to penalties of filling station owner and the fuel supply company." The report cites the example of Belgium: there, a few years ago, the failure rate in fuel samples was 30 per cent. But once the government made it clear that offending companies would be named in case of malpractice -- and heavily fined -- the situation improved.

In India, retail outlets use the name of oil companies, but aren't necessarily vertically integrated with their refineries. Companies buy from each other and share the market. As a result, the retail outlets do not exclusively use fuel from the company whose name it bears. In short, only the service at the retail outlet is branded, not the product.

The Indian oil industry opposes any suggestion of direct liability. Informs an insider: "We are not monitoring what our agents do every day. We sell them the fuel, and ultimately the onus lies on them." Only recently, some companies have begun to evolve a strategy to certify quality of services and products at selected retail outlets. The 'Pure for Sure' programme of the Bharat Petroleum Ltd is such an example. These are voluntary efforts with no legal back up.

The customer's verdict could be the ultimate answer. "Frequent testing of fuel quality and public broadcast of the results can lead to public boycott of defaulting pumps," says Desikan.

Fuel adulteration is one of the oldest illegal professions. It could survive without much customer protests so long as dinosaur carburetor engines dominated our streets. Refineries with full government protection could remain indifferent. Public reaction to poisonous air was mute. But no more. Today, people are angry. Vehicle technology is forced to improve to clean up air. But more sophisticated engines and emissions control systems, will simply collapse if made to run on contaminated fuels. Emissions will be as deadly as ever. Even the refineries cannot survive more open competition in fuel market without fuel quality as its USP. The distractors of technology leapfrog advise against aggressive technology measures before fuel markets are disciplined. But if the current mood of the new customers is any indication, leapfrogging would actually help. The strong push and protest against adulteration will come not from policing, but the market itself. A bloody mutiny over the corrosive mutation of dream cars.