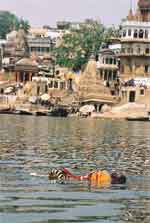 myriad problems that confront the region include burgeoning population figures, poverty, economic development, weak official infrastructure. The relationship between population and environment is a close one. It is believed that rising populations could lay an extra stress on the natural resources. However, it is not the increase in population that destroys the environment, but rather the behaviour of the populace towards the latter. For example, some countries like Taiwan and South Korea have ensured that population pressures do not result in resource degradation. This they did through a combination of sustainable growth in agricultural producti-vity and job creation outside agriculture. But countries like India and the Philippines were slow to react and favoured capital-intensive industry. Surplus labour was unable to shift to alternative employment from agriculture and environmental damage rose to great proportions.

As for water shortages, Indonesia with one of the world's highest freshwater endowments per person, faces water shortage. China, India and Pakistan face severe water shortages that have more to do with water subsidies than population growth. The World Resources 1987 report published by the usa-based World Resources Institute states that if Pakistan's irrigation system increased its efficiency by 10 per cent, the water saved could irrigate another two mha. But as long as Pakistan's farmers do not have to bear the true cost of water, they are unlikely to appreciate its scarcity and are likely to waste it.

Poverty has almost become synonymous with Asia. Nearly one billion people in Asia live below the poverty line and consi-dering that their first priority is to survive, environmental protection does not mean much to them. Natural resources like fuelwood, fodder or fish and water are all accessible to them. Invariably, the poor tend to live in areas more prone to environmental-disasters such as flooding and landslides or near polluting factories and hazardous dump sites. Environmental degradation reinforces poverty, which in turn reinforces environmental degradation and the vicious circle continues. Like population growth, poverty seems to exacerbate environmental problems in the presence of market and policy failures.


Do higher income levels imply a worse environment? This question has sparked off several research studies and a relationship known as the 'environmental Kuznets curve' has been arrived at, which in an inverted u -shaped pattern shows that as the country gets richer, its environ-ment will get worse before it gets better ( See graph: For better or worse ).

As economic development accelerates, agriculture becomes more intensive, resource extraction increases and industrialisation takes off; thus the rates of natural resource depletion begin to increase and the quantity and toxicity of wastes begin to rise. Eventually as economies become richer still, their economic structure shifts toward industries and services that use natural resources less intensively. Greater prosperity brings with it increased environmental awareness and a willingness and capacity to pay for a cleaner environment. As a result, countries enforce environmental regulations more strictly and spend more money on the environment. Subsequently, environmental degradation levels off and gradu-ally declines.

This relationship seems to apply to both urban and rural environments. While the environmental Kuznets curve has been criticised by many scholars, it is indeed true that cities like Bangkok, Seoul and Shanghai are far more polluted than they were 20 to 30 years ago, and their pollution levels are rising at rates that match or exceed their rates of economic growth. Conversely, cities in the industrial countries are cleaner today than they were 20 or 30 years ago.The Kuznets curve for Asia suggests that with increasing economic development, the environment will take a beating before bouncing back to good form and that during the next 20 to 30 years, environmental quality will improve slowly in East Asia and in the higher-income countries of Southeast Asia, such as Malaysia, and will continue to deteriorate in South Asia and the lower-income countries of Southeast Asia.

In Asia, certain types of pollution tend to rise more rapidly with higher income, but they also tend to fall more quickly. Higher initial population density together with more rapid industrialisation may account for the rapid rise, while increased environmental awareness and the availability of new abatement technology permit pollution to be reduced at relatively lower income levels.


partial estimates of the economic costs of environmental degradation, selected economics and years


The adb also adds that Asia's policy and institutional failures are mainly due to two factors: non-partici-pation of the private sector in providing environmental services and failure of the public sector to cater to environmental improvement. Shortage of funds seems to be the pressing reason for the inefficiency of the governments. Environmental services are not charged to the users and where they are, the funds are used for purposes other than environmental clean-up. Another factor that has contributed to the poor state of environment is poor environmental policies. More often than not, policies of rich countries have been adopted without local considerations and have not been implemented properly.

In the case of water management , most governments in Asia provide for subsidised water supply. Natural water resources are thought of as open access goods - a classic case of market failure. Governments have neither established well-defined, secure property rights over water (whether state, municipal, communal or private), nor do they charge proper prices for irrigation water and in many cases supply water free of charge. In Bangladesh, Nepal and Thailand, for instance, the total costs of supplying water are at least 10 times greater than the revenues collected.

Sadly, the poor for whom the subsidy is really meant actu-ally pay more for water. They lack access to services and often pay a much higher price (three to eight times as much) to obtain water from vendors or they pay a high cost in terms of foregone activities to fetch water from distant sources. Estimates suggest that some poor people pay as much as 10 per cent or more of their incomes to gain access to safe water. The wealthy are usually the main beneficiaries of subsidised public service. Their excessive consumption limits water availability for the poor.

As for pollution control , the most common policy tools are end-of-pipe standards, licenses, fines, and specific government orders to cease pollution. Governments often impose a uniform pollution standard across an industry, but monitoring is almost always inadequate. Policymakers are now trying to experiment with incentive-based economic instruments like tax-incentives and pollution charges.

In India, the 1986 Environmental Protection Act provides for minimum national standards that are binding for all industrial firms nation-wide. As the standards are framed in terms of maximum concentrations of pollutants in effluents and emissions, factories have an incentive to dilute their pollution, not necessarily to reduce it. Statistics from the Central Pollution Control Board show that during the 1990s only seven per cent of factories in polluting industries (117 out of 1,641 medium and large factories) actually complied with the norms. Economic instruments to combat pollution in India are largely limited to accelerated depreciation allowances for pollution reducing equipment and reduced customs duties, and these have not provided firms with incentives to choose the cheapest antipollution options.

Southeast Asian countries also rely on the command-and-control appro-ach, which is a combination of discharge permits and fines on excess emissions. Effluent and emission standards are the most common regulatory tools. The Philippines, for instance, has ambitious air and water quality standards that apply to all industrial esta-blishments and power generation facilities regardless of their size and location. However, these standards are inefficient and are not adequa-tely monitored and implemented. Malaysia's air pollution standards are measured in tonnes of pollution load encouraging dilution of pollu-tants as in China and India but it overcomes this problem partly by effective monitoring.
Asia Environment Air Pollution Industry Industry Toxic Wastes Deforestation Waste Disposal Waste Disposal Cover Story Cover Story
SUPPORT US