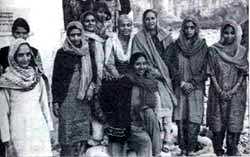 PAKKHI, a sleepy village tucked away in the picturesque Kangra district of Himachal Pradesh, woke up one day in April with women blocking roads to stop illegal quarrying. Last year, the women of Gerthun, Kauna, Umri and Kalakkad got together to build a ropeway across the nearby river. These are not isolated instances. Across many villages in the region, mahila mandals (women's groups) are coming out in the open with their problems, shaking away years of shackled living. Kangra's mahila mandals, although initially organised by outside agencies, are today being effectively used by village women to achieve common ends.

"Did you cross the river by the jhula (ropeway)? How was it?" asks an eager and excited Soma Devi of Gerthun. Most women in the area react similarly -- and with good reason. In the monsoons, the jhula across the Neugal becomes the only link between this part of Himachal Pradesh and the rest of the world. And it is there because the women built it.
For most of the year, the Neugal flows quietly in and out of the low-lying hills of Kangra in the shadows of the lofty Dhauladhar range. In the monsoons, it turns a killer. Soma Devi tells, "Every year, 2 to 3 people die while fording the river in fury. But there was no other way." In February 1993, tired of futile appeals to the panchayat (village council), the mahila mandals of Gerthun, Kauna, Kalakkad and Umri decided to act. Bina Devi, pradhan (chief) of the 25-member Kauna Mahila Mandal, explains, "The idea of a jhula occurred to me. And we resolved to build one, come what may."

Two meetings later, the women decided upon a "Jhula Committee", with members drawn from the 4 villages. The committee's task was to raise funds and oversee the construction of the jhula. Within 3 months, this gritty group managed to gather Rs 30,000; the government provided the rest. "It wasn't easy," reminisces Dhani Devi from Gerthun with a smile. "I used to leave all housework to my sons and set out daily to collect money." A contractor was engaged by the Society for Environmental and Rural Awakening (ERA), an NGO based in nearby Duhak. By July 1993, the jhula was operational.

Bina Devi's smile radiates pride and elation as she says, "People said women could never build a jhula, it was not women's work. Even the Public Works Department engineer said it could not be done. We've been using it for more than a year now." With success has come self-assurance. Soon after the jhula was built, the women met the district collector and demanded an approach road to their villages, which was immediately sanctioned. A beaming Bina Devi says, "Work is already in progress. The government is there to work for us, we only have to ask."

The women of Pakkhi village are similarly fired with enthusiasm after their recent success. The bed of the Neugal has been illegally quarried for stone and sand for years. "The huge pits in the river made crossing more dangerous," fumes Gowri Devi, a veteran of many summers. In April this year, the women of the Pakkhi Mahila Mandal blocked the approach road to the riverbed for a week. Kesari Devi, the pradhan of Pakkhi's 3-year old Mahila Mandal, relives the heady excitement of those days: "One woman kept a lookout for the contractor's truck and would alert the others as soon as it was spotted. All of us would then dash off to block the road. The contractor was livid. He threatened to beat us up. Then he begged. But we refused to give in. He had no choice but to leave Pakkhi."

In Gerthun, Bina Devi talks of the Mandal's role in resolving domestic disputes. "One of our members was not being given enough money for household expenses by her husband. We spoke to him but he said it was not our business. Then we called him to one of our meetings and told him, in front of all the women, to shell out the money. He does now."

In Karal, Satya Devi, the pradhan of the 6-month old Mahila Mandal, points out the bavdi (the open spring which is a traditional water source) which has recently been cleaned up after removing "quintals of dirt". The bavdi now has separate areas for washing clothes and bathing. She adds sternly, "Rs 50 is the fine for going in with shoes on." Social pressure has, however, proved effective in maintaining cleanliness, making fines redundant.