Subsidies given annually to industries for pollution control are unmonitored 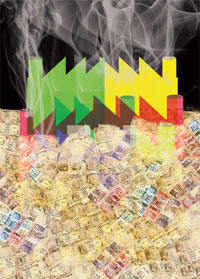 Government grants huge tax exemptions to industries for installing pollution control equipment. This is done to achieve certain environmental, social and economic goals. But it has failed to monitor the working of this subsidy regime.

While many industries do achieve the desired pollution control results, many others blatantly flout norms. Frequent complaints against industries like sponge iron and paper testify this.

In 2009-10, government forewent revenue totalling a whopping Rs 3,300 crore for industrial pollution control, found Centre for Science and Environment (CSE), a Delhi-based non-profit. But no one knows whether this generous subsidy justifies the efforts industries made to control pollution.

Government’s Accelerated Depreciation (AD) scheme gives tax benefits to industries for benign investments such as cleaner energy and pollution control. The operating profits of industries are written off at the specified AD rate, thus minimising their tax burden.

In its effort “to promote a cleaner and healthier environment” government handed out a generous 100 per cent AD for installation of pollution control equipment in the 1993-94 budget, which is ongoing (see 'Pollution controllers'). Industries can avail tax credits as per the prevailing corporate tax rate. This is 33 per cent at present. The net capital cost thus becomes cheaper by one-third.

In the renewable energy sector, government gave AD at the rate of 80 per cent for wind and biogas projects. Wind energy is the single largest beneficiary of this scheme.

CSE studied how the AD scheme for industrial pollution control is administered and computed the subsidy availed in 2009-10 (see Tax breaks). Chartered accountants declare and write off the tax break at the company level. The amount was calculated based on the market size of industrial pollution control equipment, estimated at Rs 10,000 crore for that year. The finance ministry’s Statement of Revenue Foregone states the total tax benefit under Section 32 of the Income Tax Act in 2009-10 was Rs 29,308 crore. Of this, government had to forego Rs 3,300 crore (US $700 million) on pollution control.

The tax break amounts to almost twice the annual budgeted expenditure of the Ministry of Environment and Forests (MoEF). The budget expenses are extensively reported in the annual reports. Yet, neither the finance ministry nor the MoEF monitors and reports on the performance of this generous subsidy.

Capital subsidies merely encourage installation of equipment. There is no incentive to operate and maintain them to their optimum level. “Industries would be eager to use the equipment only if its operating cost is below the value of the material recovered,” says U Sankar, professor at Madras School of Economics in Chennai. Also, the government does not give incentives based on the choice of equipment quality and technology.

For operations, there is no intrinsic motivation to reduce pollution. Flouting norms have become routine, notwithstanding the measly threat of legal action from pollution control boards.

A modification in AD scheme can address this loophole. If a part of the subsidy is given on the basis of annual performance, industries may brace themselves up. In 2009, the Ministry of New and Renewable Energy (MNRE) had launched a pilot scheme on generation-based incentive (GBI) for wind energy. This was an alternative to its 80 per cent AD scheme to incentivise higher generation over the turbine’s lifetime. So far, 700 MW has been installed under GBI.

Performance-based incentive requires extensive monitoring, reporting and verification. Nonetheless, it addresses the issue of the subsidy’s effectiveness, and improves compliance.

“A close scrutiny of AD scheme is essential for its efficacy,” says Chandra Bhushan, deputy director general of CSE. “The finance ministry should release a white paper on the performance of the scheme. Such subsidies should be allocated to respective ministries to ensure better accountability,” he adds.

While issuing the first Statement of Revenue Foregone in 2006-07 the then revenue secretary K M Chandrasekhar had asked for parliamentary scrutiny of such schemes. “It is easy to give away tax breaks. But it is also essential to assess whether it leads to increase in the aggregate welfare of society, and continues to serve its purpose,” he said.