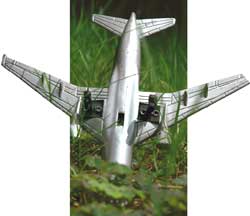 It all started bizarrely but innocuously enough on August 2, 2005 -- the day Air France flight 358 crash-landed amidst severe weather in Toronto, Canada, trundled off the end of a runway and burst into flames. All 309 people aboard the plane were saved in what media accounts of the accident called a "miracle".

Then it looked as if luck ran out for the airline industry: over the following six weeks at least 470 people were killed in five worldwide plane crashes, and August 2005 became the deadliest month in the history of commercial aviation. The incidents have re-ignited a worldwide debate over commonalities between crashes and what, if anything, should be done about them.

The August 2 Air France "miracle" was followed by an August 6 crash of a Tunisian charter plane into the sea near Sicily, killing at least 13. On August 9, a West Caribbean Airways flight from Panama to Martinique went down in remote Venezuela, killing all 152 aboard. On August 14, a Cypriot plane operated by Helios Airways plummeted near Athens, killing all 121 passengers. On August 23, a tans jet crashed into the Peruvian mountains during a heavy storm, killing 43. Finally, on September 5 a Mandala Airlines flight plunged immediately after takeoff into a heavily populated area of Medan, Indonesia's third-largest city, killing 103 of 117 passengers and 47 more on the ground.

What lends a touch of irony to these horrific accidents is that the head of the un's International Civil Aviation Organisation (icao) has noted recently that 2004 "was the safest in terms of fatalities since the creation of icao in 1944 and the second lowest in terms of the number of accidents". Indeed, worldwide trends show air travel has been getting consistently safer year after year -- statistically, air travel safety is six times better today than it was a quarter century ago, and with vastly increased daily flights.

Worldwide safety records are not monolithic, however, and regions like Europe, the us, and Australia are far better than Africa, Asia, and some former Soviet countries. Further, while the ratio of fatalities to flights has continued to fall, the raw numbers of both have increased.