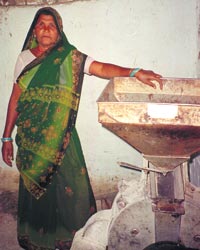 Its infertile land, lack of irrigation facilities and feudal social order contribute to make Bundelkhand in Uttar Pradesh one of India's most backward regions. But over the past eight years, things have started looking up in Jalaun and Mahoba districts of the area. Irrigation facilities have improved, food insecurity is on its way out and more students attend schools with attendance being more gender-balanced.

Assertion by women -- predominantly from lower castes -- for rights over land and other natural resources has made this improvement possible. Now these women, organised by two non-governmental organisations (ngos) -- Samarpan Jan Kalyan Samiti in Jalaun and Gramonnati Sansthan in Mahoba -- have roped in the region's male population in their struggle.

Since 1996, when the movement began, Samarpan has formed 162 women's self-help groups (shgs) in 35 villages of Jalaun. These bodies have combined savings of Rs 3.6 lakh, and grain banks set up by the shgs in Jalaun have a cumulative stock of about 13.6 tonnes.

Samarpan's director, Radhey Krishna, recounts: "When the banks began, most shg members had food grains for only three months. Convincing them to save grains was a daunting task." He adds: "But it was important to end the vicious circle of villagers borrowing grains from landlords and being expected to return two-and-a-half times the quantity in the next season." Rajeshwari of Pipri village reveals: "When the banks started, many women stole grains from their homes and hid them in the clothes they carried to the community well for washing; the men were oblivious of all this."

One of the most successful examples is that of Beona Raja village. Till a few years back, it had hardly enough water for a single crop in a year. The turnaround began in 2002 when women under the leadership of Girija Devi, a dalit , started implementing the village's watershed scheme. Now, even poor farmers can harvest two to three crops a year. Unsurprisingly, there was a 50 per cent drop in migration in 2002-2003. Only 66 people shifted out of the village in search of jobs during the period, compared to 136 in the previous year.

The other ngo, Gramonnati, began a project to empower women in Kabarai block of Mahoba in 1998. It was assisted by the international ngo Oxfam. Currently, Gramonnati works in 22 villages of the block. Till 2002-2003, more than 4,560 families (1,127 from among Scheduled Castes and 2,611 belonging to other backward castes) of Kabarai block had benefited from Gramonnati's work.

About 72 shgs function in the 22 villages today; their 800-odd members have savings of more than Rs 1.25 lakh, and Rs 2.5 lakh has been loaned out. Here, too, migration rates have fallen drastically. As per a Gramonnati estimate, 1284 people moved out of these villages in 1998. By 2003, the number came down to 678. About 211 hectares (ha) of barren land was brought under cultivation in 2002-2003; another 312 ha has started yielding two crops a year due to better irrigation facilities.

In Ganj -- a village of 3,400 people -- not very long ago, upper castes controlled all productive land. If the poor -- mostly from the Scheduled Castes (sc) -- had any land, it was devoid of proper water sources. So, they could hardly produce enough to feed a family of five or six for a couple of months.

The early 1990s saw Gramonnati digging new community wells and building check-dams. Today, Ganj has irrigation water for around nine months in a good monsoon year. The association with the ngo has brought immense relief to 42-year-old Karpoori Devi. Earlier, her husband Hariprasad had to migrate to Noida, on the outskirts of Delhi, to take up odd jobs. With improved irrigation, Karpoori's fields yield more. So, Hariprasad does not have to go to cities for menial work.

There is hardly any child in Ganj who does not attend school. Many, including a number of girls, even go to colleges in Mahoba and Kabarai, both about 15 kilometres away. Thanks to Gramonnati's efforts, women no longer put up with violence. In 2003-2004 alone, the ngo took up 45 cases of atrocities against women of which 20 are already in courts. Will villages such as Ganj and Beona Raja show the way for the rest of the country?