1 + 1 = 11 People have responded overwhelmingly with money and voluntary labour to a government call to renovate water harvesting structures. The state government has used drought as an opportunity to take long-term steps to secure water. This is fast becoming a statewide movement 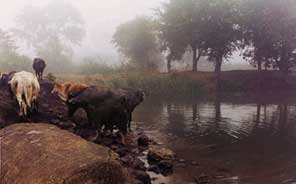 people's participation. Competitive political populism. A state government urging people to take up rainwater conservation on a big scale. These are the hallmarks of Madhya Pradesh government's effort to take up water harvesting in a big way.

The year 1999 started off with a bad drought in western Madhya Pradesh. Mandsaur, known for cultivation of the water-intensive crop opium, was facing a crisis. "There was panic in the Malwa region as groundwater was depleting very fast," says Narendra Nahata, industries minister, who belongs to Mandsaur district. Some 23 per cent of the district's agricultural land is irrigated. Only two per cent of this comes from government canals, the rest comes from private wells. The groundwater level had dipped from 9-12 metres in 1975 to 18-23 metres in 1999. Local leaders began generating awareness about overextraction of groundwater and ways to deal with it.

The first Malwa Jal Sammelan (Malwa Water Conference) was organised on June 10, 1999. People's representatives from all the panchayat s of the district were invited. The chief minister, Digvijay Singh, who presided over the meeting, called upon each elected representative to build or renovate a tank during his or her tenure. The Ek Panch Ek Talaab programme was, thus, born.

The programme, Ek Panch Ek Talaab, literally means every member of the village, block and district panchayat should become responsible for reviving or constructing a talaab (pond) or tank. The state has 350,000 members of panchayat s in its 51,000 villages. Hence, the programme could theoretically result in 350,000 ponds and tanks. Drought is likely to be the only loser.

Having implemented the Rajiv Gandhi Watershed Development Mission ( rgwdm ), perhaps the biggest programme of its kind in the world, the state has taken the next step towards drought-proofing in the face of a bad drought. As watershed development is only possible in certain areas, the state government needed a new programme of conservation that could reach out to all districts. Like rgwdm, the new programme is also decentralised and serves two purposes:

l Turns water conservation into a people's movement across the state.

In January 1999, Singh had written to all collectors in the state to take up cleaning of the state's tanks and rivers. He asked the members of parliament ( mp s) and members of the legislative assembly ( mla s) of the state to contribute to this end from the local area development funds at their disposal. He called for a people's movement for restoration of waterbodies during the dry months of April and May. The reaction varied from district to district. The political leadership saw sense in this. The failure of the 1999 monsoon added urgency to the efforts. "The drought came as a blessing in disguise," recalls Nagendra Yadav, member of the Shahdol district panchayat . "People realised the importance of water and there was an immediate acceptance of the programme with people contributing generously to it. "


By the time the 2000 monsoon arrived, five districts, including Mandsaur, were reviving tanks (see p35). Since June 1999, 3,412 of the state's 21,319 existing tanks have been renovated and some 500 new ones have been built with an investment of Rs 16.1 crore from rural development funds allocated to the panchayati raj institutions. The voluntary labour put in by the community was worth Rs 4.85 crore. The state government has set a target to revive all existing tanks in the coming five years.

"It was assumed that the new village-level leadership that took over after the panchayat elections in December 1999-January 2000 would be more positive towards this programme," says an aide to the chief minister. The state government has decentralised planning and has allocated a major portion of its planned expenditure to village councils, which are the nodal bodies for implementation and take all the important decisions. It is not binding on the panchayat s to spend money on water conservation. Yet they do it. As part of its drought relief operations, the state government directed district rural development agencies to spend a part of their money on water conservation. "It is a decentralised programme and depends on the panchayat 's decisions. In the absence of extra funds, communities have volunteered to fill the gap," says Anupam Rajan, chief executive officer of Shivpuri District Rural Development Agency.

Three reporters involved in the preparations of Making Water Everybody's Business , travelled through various districts of mp to get first hand information about the implementation of the programme. They found that the programme had already started showing results by early 2001. There were reasons to make a big effort to assess the performance of the programme. The economy of mp is primarily agrarian and people -- especially the poorest and the most vulnerable -- rely heavily on livestock. Agriculture and livestock both depend entirely on water, the only source of which is rain. Water scarcity in mp is so serious that in the drought-affected dry winter of 2001 only 30 per cent of the agricultural area has been sown with rabi (winter) crops. "The 2001 drought is so serious that we have not witnessed such a drought for a century," says Singh.

The state government has banned the use of water in the existing tanks for irrigation. In October 2000, the entire state was declared water-scarce. But the Union government's Scarcity Relief Committee has found that the 2000-01 drought is manageable in areas where extensive watershed development has taken place. In the drought of 2000, it had become clear that villages, such as Gelhar Choti in Jhabua district, that had undertaken rainwater harvesting were better prepared to face the drought (see 'Standing the test of drought', Down To Earth , January 15, 2000).


The reporters came back with positive stories. They saw competitive political populism -- politicians vying with each other to contribute to the programme. The level of mobilisation among common people was just as impressive. They were raring to take proactive measures to match each effort of the government with two of theirs. Voluntary labour was complemented with financial contributions and donation of land to clean up silted ponds and make new ones.

In Shahdol district, tank restoration work had started even before the programme was announced. In September 2000, while he was flying down to Shahdol to attend a public meeting, the chief minister saw thousands of tanks reflecting sunlight, shining like jewels. Now, he barely misses an opportunity to speak about the 'shining' example of Shahdol, which literally means one thousand lakes (see p35). Didawali village in Shivpuri district has reaped a rich harvest of wheat -- no resident can recall a similar harvest in the past. A web of check dams built under rgwdm has made this possible.


District authorities help in estimating the cost of the job for each and every panchayat. An engineer is given charge of a cluster of village councils for making estimates and giving technical assistance if required. No contractor is involved.

Funds are mobilised from various schemes. According to guidelines issued in February 2000, the programme should get priority funding from the budget for rural development. In any case, the cost of renovating old tanks is small, ranging from Rs 15,000 to Rs 70,000 per tank. The state government facilitates fund use by prioritising the programme, spending all its drought relief money on water conservation. This is routed through the district authorities to panchayat s for water conservation activities. Similarly, under the state's Jan Sahoyog Nidhi Niti (a state government programme implemented by district authorities), the Ek Panch Ek Talaab programme gets priority -- the annual budget of Rs 30 lakh of every district under this scheme is being used for water conservation.

The district authorities find funds through schemes like the Employment Assurance Scheme ( eas ) and the Jawahar Gram Samrudhi Yojana ( jgsy ). The village assembly decides on the community's contribution. At least 50 per cent of the Rs 1-1.5 lakh that each panchayat gets can be spent on water conservation. As most of these schemes are meant also for generating employment by creating infrastructure like roads and schools, no contractor is involved in the execution of the work and landless villagers are employed for manual work. They also get rights to fish in the tanks.


The Ek Panch Ek Talaab programme is now seen as an extension of the rgwdm . "It is a second generation mission. Water conservation should be a mass movement and should be powered by local initiative," explains R Gopalakrishnan, secretary to the chief minister and director of the Rajiv Gandhi Missions.

The watershed mission's reach is limited as it is funded by certain schemes, which allow implementation only in specific blocks -- only 12 per cent of the state's area is covered. In the past two years there has been no extension of the programme to new areas as no extra funds are coming. "So we had to embark on a programme which reaches each and every village of the state and which uses internal resources," says Sudha Chaudhury, deputy secretary, department of panchayats and rural employment. "Villages need not depend on one mission forever," explains Gopalakrishnan. The state has now initiated Pani Roko Abhiyan (Catch water campaign), to push for water harvesting in all the villages of the state (see 'Water revolution', Down To Earth , Vol 9, No 20).

But the most remarkable aspect of the programme has been the response of the political leadership. "It is an opportunity for politicians to restore their credibility with the people," says Nahata. "There is competition among mla s to support tank restoration in their respective constituencies," says a top official in the chief minister's secretariat.

The fallout of this effort is also visible in cities that face water shortage. The local administration, along with academics and the publishers of the popular Hindi newspaper Nai Duniya are making efforts to involve people in water harvesting in Indore. The groundwater table is falling rapidly in this industrial hub of central India. Just above half the city's water requirement can be met today. A declining rainfall and growing population have led Indore to overexploit its groundwater. On the occasion of its 50th anniversary, the Nai Duniya group set up the Nai Duniya Seva Trust. The proprietors have promised to pay five paise to the trust every day for each of the 130,000 copies of their newspaper.