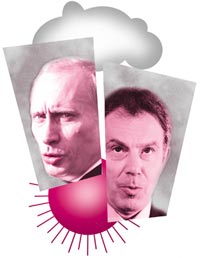 Russian deputy prime minister Alexander Zhukov has asked president Vladimir Putin to extend till December 15 the deadline for an official report on the Kyoto Protocol on global warming. This has come as a setback to enthusiasts of the protocol. Putin was to receive the report in August. But in a letter to Putin dated August 20, Zhukov said more time was needed for work being carried out in conjunction with the Russian Academy of Sciences, according to Reuters. Interestingly, the deadline coincides with the Tenth Conference of Parties to the un Framework Convention on Climate Change, to be held from December 6-17 in Buenos Aires, Argentina, where signatories of the Kyoto Protocol will meet.

In its September 9 news item, Reuters also claimed to have obtained a copy of a draft report by prime minister Mikhail Fradkov criticising the treaty. The draft said the government was not convinced that "the treaty would lead to significant new investment or sales of emission quotas". It also said the pact was not tailored to fit Russian needs and did not fully take into account the country's climate and geography.

But foreign minister Sergei Lavrov clarified later the same day that Russia was working to approve the treaty, despite the draft report indicating otherwise. He added that the announcement Putin made at a meeting with the European Union (eu) in May remained in force (see "Conditional Support", Down To Earth, Vol 13 No 3 June 30, 2004). Putin had promised to "accelerate progress" towards ratifying the treaty in return for eu relaxing its demand that Russia reform its domestic energy pricing as a pre-requisite to entering the World Trade Organisation (wto).

Russia remains the only country that could enable the treaty to become legally binding. (At least 55 nations, including enough industrialised countries so as to account for 55 per cent of greenhouse gas emissions by all industrialised nations in 1990, need to ratify the treaty.) So far, 44.2 per cent of the emissions have been accounted for although 124 nations have ratified the treaty. That's because the us, with 35 per cent emissions, opted out of the treaty in 2001. That leaves Russia, whose emission share in 1990 was 17.4 per cent, with the casting vote, which it has been using to extract benefits such as its entry into the wto.

Climate change to be top priority for G-8

While Russia put off taking a final decision on the Kyoto Protocol, British prime minister Tony Blair promised to try to galvanise Group of Eight (g-8) leaders to tackle global warming when his country took over the group's presidency next year. In a speech in London on September 14, he said: "Climate change would be our top priority for next year's g-8. I do not underestimate the difficulties. This remains an issue of high and fraught politics for many countries."

Making a strong case for urgent action, Blair spelt out his three-point strategy. First, secure a global agreement on the science of climate change and its threat, then build consensus on a process to speed up the technology and other measures to meet the threat and finally engage other countries like China and India on how they could meet their energy needs sustainably. The last point aims to placate the us, which has opposed the treaty for not requiring that large developing countries reduce their emissions.

As a first step, he proposed an international meet on the science of climate change in February prior to the g-8 summit. Blair felt the g-8 -- the world's richest nations -- should take the lead on the issue. "It is the poorest countries in the world that will suffer most from severe weather events... Yet it is they who have contributed least to the problem," he said.

The biggest hurdle to Blair's plans remains the us. Blair admitted opinion in the us had not changed much since it pulled out of the treaty. But he also pointed to reports by the us Energy and Commerce secretaries accepting the potential damage from climate change, and a us National Academy of Sciences study conceding a link between human activity, carbon emissions and atmospheric warming.

Blair's critics think all his fine words are just "hot air". They accuse his government of not doing enough at home. For instance, a recent study by ilex Energy Consulting for the international conservation organisation wwf shows that the uk could reduce upto nine times more carbon dioxide that it emits, than is being targeted in its plans for 2005-2007. Moreover, they feel that he has said nothing different from his previous speeches. Nonetheless, Blair's speech gives hope to the optimists who feel he must act quickly if he wants to translate his promise into reality.