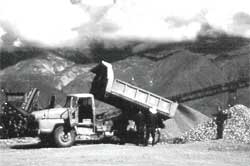 yamdrok Tso is Tibet's third largest lake, a jewel of turquoise brilliance lying 120 km south of Lhasa at a height of 4,445 m. As a closed lake system, its brackish waters have a mineral content just below the upper boundary of normal freshwater, fed by snow melt and limited rainfall from a mountainous catchment some 6,000 sq km in extent. Averaging between 30-60 m in depth, it forms a giant natural reservoir with an estimated capacity of more than 15 billion cubic metres.

The lake, which is regarded as sacred by Tibetans, provides an important habitat for many local wildlife species as well as resting place for at least a dozen migratory birds on their way over the Himalaya. Of greatest concern perhaps is the black necked crane ( Grus nigricollis ), classified as vulnerable under the revised global red list of endangered species issued by the International Union for the Conservation of Nature (iucn).

China's ministry of water conservancy chose Yamdrok Tso as a site for a hydroelectric power scheme in 1984. Construction began in 1985 but work stopped a year later when Tibetans opposed the scheme. While China claimed the scheme complied with its environmental protection laws and would cause minimal environmental damage, a United Nations' Development Programme report confirmed that "the project would reduce the area of the lake" and raised serious issues about ecological balance as well as cultural and religious impacts.

Despite this, construction resumed in 1989. In 1991, when the scheme was listed as a key project in China's eighth five year plan (1991-95), the hydropower command of the people's armed police arrived with 4,000-5,000 cadres to build the project under a shroud of secrecy while China launched a major publicity campaign glorifying their "heroic work for the benefit of all Tibetans".

In 1992, as the estimated cost of the project rose from us $130 million (1989) to more than us $160 million, a petition with more than 10,000 signatures calling for construction to stop was presented by various international campaign groups active on the Tibet question, to the Chinese delegation attending the Earth Summit in Rio de Janeiro. The us -based International Campaign for Tibet also began campaigning against the scheme, focussing on the alacrity with which foreign companies were competing to win work on a project which spelled environmental and cultural disaster for Tibetans.

None of this made any impression on China where the National Chemical Imports and Exports Corporation was busy awarding a contract worth around us $40 million to supply four turbines, pumps and steering systems for the Yamdrok power station to two European companies: the Austrian Elin Energietechnik and German Jm Voith Ag.

In Death of a Sacred Lake , a recent briefing on Yamdrok and its significance, the uk -based Free Tibet Campaign (ftc) alleges that both these companies have a long track record constructing controversial dam projects such as the Pak Mun dam in Thailand (where 20,000 people were forcibly moved from their land), the Cirata dam in Indonesia (where an estimated 60,000 people were dispossessed) and the Mosul dam in the Kurdish region of northern Iraq (built in an area more or less forcibly cleared of local inhabitants by the military). Despite these claims and the controversy over Yamdrok Tso, neither company has ever tried to justify their involvement in the scheme either to Tibetan or environmental advocacy groups in Europe and elsewhere.

The turbine contract confirmed estimates that the capacity of the finished plant would include a 15,000 kw turbine operating by the end of 1995, rising to six of these generating 90,000 kw by 2000. The output of the station would be limited by the capacity of the transmission system and the power supply for pumping, providing an average long-term output of around 84 gw per year. This revelation appears to suggest the station may operate to around only 10.6 per cent of its full capacity, at least in its early stages.

Despite this constraint, or perhaps because of it, ftc argues that the promise made to pump clarified river water back up to the lake, is in fact little more than a hollow promise made "just for show".

Tim Nunn, director of ftc told Down to Earth , "Eight Elin/Voith engineers working in Tibet last summer indicated they do not believe the Chinese will sacrifice the large amount of power required to return the water some 850 m back up to the other side of the mountain through the reverse turbines. On the basis of what we know, we are not even confident that the equipment for doing this has been installed."

Nunn is, however, certain that Yamdrok is pivotal in the next phase of China's strategy to erase Tibet and any claim the Tibetans still make for independence. "The scheme is fundamental for China's population transfer policies because it will provide the power for economic development required to feed and employ the rising tide of immigrants arriving in Lhasa and other areas," says Nunn. "While consolidating their economic and political grip on the Tibet Autonomous Region, they fully intend to exploit its natural resource base for the benefit of the wider Chinese economy and at the expense of the Tibetans."

For Tibetans, the potential destruction of Yamdrok Tso has powerful symbolic resonance as well as profound environmental and economic consequences. Since pre-Buddhist times, the lake has been attributed with a life power or force which protects and sustains the entire nation. If the lake should dry up, the whole population of Tibet will be affected significantly.

In January 1996, Elin Energietechnik claimed the first turbines began operating late last year generating around 25,000 kw (well in excess of current peak demand in Lhasa). Nunn adds, "No firm information is available to confirm this but we know from press reports that the head of the armed police division building the scheme was removed from her post following allegations of corruption. Rumours also abound about accidents in the tunnels killing construction workers and severely hampering progress. There is other more anecdotal evidence as well to suggest no power has been generated so far."

Elin still anticipates the other turbines will be installed in time for the entire scheme to come on stream by the end of this year. Before then, the ftc hopes the 20th World Congress of iucn will adopt a resolution on Yamdrok sponsored by the Australian Wilderness Society, the International Committee of Lawyers for Tibet and a range of other environmental ngo s. This calls on China to assess the environmental effects of the project thoroughly, specifically the impact it will have on local climate, fisheries and bird habitats. Unless China can be forced to respond, to answer the call made in the resolution for them to establish convincingly that the scheme will not destroy the lake, then the disaster -- for Tibetans and for Asia as a whole -- will be just beginning.


China has long argued the power scheme will have no damaging environmental impacts and falls well within its environmental regulations. Yet, no full or independent environmental impact assessment has ever been completed for what the ftc claims will be "the most destructive of all development projects in progress in Tibet today".

Under China's plans for the power project, the effect on water levels of daily draw-down will be countered by the addition of 'clarified' river water. This will be taken from the Tsangpo river using excess power in off-peak periods to pump it back up through the mountain to replenish the lake.

At present, only pristine meltwaters feed this oligotrophic lake (poor in nutrients and high in oxygen) which has a fragile ecology with limited underwater flora and fauna. Adding large quantities of river water carrying even a small sediment load will potentially deliver far more nutrients to the lake, a process likely to lead to a rapid drop in oxygen concentration and eventually to eutrophication. Some scientists predict the brilliant turquoise colour will quickly disappear once the water column and mineral balance is disturbed.

In China's own summary report about the effects of the project on the lake's hydrology and chemistry (Weiguang, S 1991, Hydropower Development of Plateau Closed Lake in Tibet: Environmental Problem and Protection , Advances in Water Resources Technology, Balkema, Rotterdam) most key questions remain unanswered, not least the effects of draw-down on the lake shore habitats or the impacts of mineralised water entering the Yarlung Tsangpo (headwaters of the Brahmaputra).

To date, even the most conservative estimates made by a foreign contractor working on the scheme suggest the lake could drop by around a metre every 10 years, enough to make it substantially smaller within as little as 20 years.