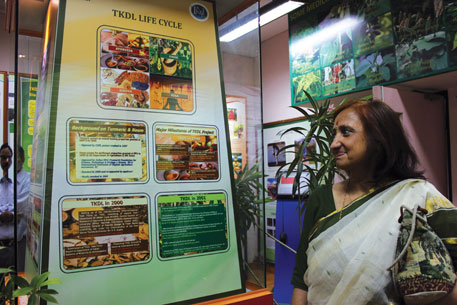 Vinod Kumar Gupta is used to ministers and other VIPs from across the world beating a path to his office and wanting to “see” the unique institution that he has created. Gupta is the man behind the Traditional Knowledge Digital Library (TKDL), a valuable tool in the battle against theft of traditional knowledge. For India, it has proved effective in checking the piracy of ancient wisdom related to medicinal plants in an extremely cost-effective manner. Now other developing countries whose TK is being plundered want to replicate it.

TKDL, located in Ghaziabad, on the outskirts of Delhi, is not the easiest of places to find even with a map. And when you do find this internationally recognised institution there is nothing much to see barring some graphic representations of traditional Indian systems of medicine. TKDL is a technology platform. It uses the tools of information technology and a novel classification system to make available the traditional medical knowledge of India to patent offices in the major developed countries so that what was known for centuries is not patented by unscrupulous individuals, companies and research organisations as something they claim to have discovered or invented.

The trigger for TKDL was the infamous case related to the patenting of neem extract in Europe to fight fungal disease of plants and another in the US on turmeric as a healing agent. Both these are centuries old practices in India and their patenting in the mid-1990s caused outrage in the country and led to high-profile legal battles which acknowledged the validity of TK. But the victories were hard won. They cost huge amounts of money and took long years to settle—12 in the case of neem. The turmeric patent was challenged by the Council of Scientific and Industrial Research (CSIR) which used an ancient Sanskrit text to show there was prior art in the use of turmeric as a healing agent and was, therefore, not a novel invention. These cases prompted then CSIR director-general of R A Mashelkar to seek institutional remedies for the brazen theft of TK. The digital library is a joint enterprise of CSIR and Department of AYUSH of the Ministry of Health and Family Welfare.

Biopiracy or misappropriation of TK is rampant, not just in India but in a host of countries that are rich in ancient lore of healing and the use of plants in food and cosmetics. This treasure trove of knowledge is being plundered by a range of enterprises, from multinationals such as Nestle, Procter & Gamble, Johnson & Johnson, L’Oreal and Avon to domestic companies such as Avesthagen and Lupin and first-time entrepreneurs, for commercial profit by filing wrongful patents on known formulations. The TK of 110 developing countries is vulnerable to theft and capture.

Gupta realised that the drawback with TK documentation was that it lacked a classification system. He, therefore, set about devising a modern classification based on the structure of International Patent Classification for India’s traditional systems of medicine and health: ayurveda, unani, siddha and yoga. This knowledge, found in Sanskrit, Tamil, Arabic, Persian and Urdu texts, are inaccessible and incomprehensible to patent examiners abroad—and even to those in India. The focus was on breaking the language and format barriers by scientifically converting and structuring the available TK on the International Patent Classification (IPC). The novel classification system that was developed, the Traditional Knowledge Resource Classification (TKRC), has resulted in a fundamental reform of IPC by enhancing the TK segment from one subgroup to 207 subgroups and thus enabling effective search and examination process.

The knowledge culled from ancient texts are stored on 34 million A4 size pages and translated into five foreign languages. “Now a Sanskrit sloka (verse) can be read in Japanese, English, Spanish, German and French by examiners in international patent offices on their computer screen,” explains Gupta. TKDL has signed access and non-disclosure agreements with the Indian and seven global patent offices. 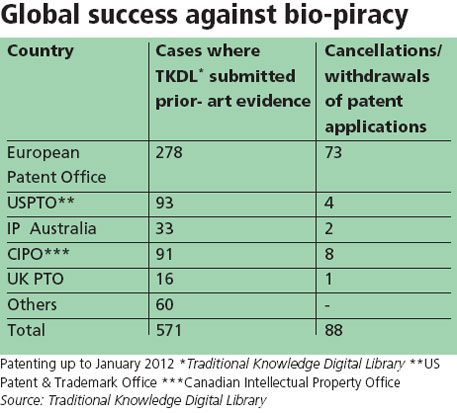 All of this required not just high-end technology, but also skills of a high order: people with knowledge of ancient texts, modern medicine and technical terms of foreign languages. The price tag for this unique, proprietary system: Rs 16 crore (around $3 million)—Rs 82 lakh in capital costs and the rest in recurring expenses, mainly salaries.

How effective is it? In the last three years TKDL has identified 1,000 cases of biopiracy of India’s TK. In 105 cases patent claims were withdrawn or cancelled by patent offices—decisions that were effected in just 4-5 weeks at zero cost. All that is required is an email to the relevant patent office. This is the biggest benefit for countries such as India which can ill afford the huge legal fees (a minimum $500,000) in fighting wrong patents across the globe. Or the time. For instance, it cost APEDA (Agricultural and Processed Food Products Export Development Authority) seven years and Rs 7.62 crore in legal fees (Rs 5.1 crore to a foreign law firm) to fight malafide intellectual property rights on basmati rice. This does not include the tab for travel and administrative costs which could well have matched the legal expense.

Based on this, it would cost the country a whopping $200 billion to defend the 250,000 formulations now listed in the digital library. More significant, claim CSIR officials, is that TKDL is acting as a deterrent. A recent study reveals as much as a 44 per cent decline in patent claims filed on Indian systems of medicine. This is probably what prompted Peru, which has publicly declared its intention of setting up a similar institution, to send its Minister of Foreign Trade to meet Gupta earlier this year. Like India, Peru is a megadiverse country and has been waging an active campaign to protect and preserve its natural resources. Although its National Commission on Biopiracy is a good watchdog—a senior World Intellectual Property Organization (WIPO) official described the country as a leader in the fight against misappropriation—Peru says it wants an institution that will catalogue its rich biodiversity and determine the manner in which it should be accessed.

TKDL is work in progress and will continue to be so for a long time. Apart from the huge collection of ancient texts yet to be tapped, it also plans to access the database of all publicly funded national institutes. Already, it protects about a quarter of a million formulations culled from ancient texts. Its latest addition is yoga postures and the library has videos of the most common exercises. This is a response to the national furore over the increasing number of patents being granted in the West for yoga exercise which practitioners claim. Recognising India’s singular achievement, WIPO and CSIR held, in March 2011, an international conference on using TKDL as a model for protection of TK globally. That meeting drew 33 developing countries eager to have their own versions of this mechanism. According to WIPO, such a mechanism can fuel future innovation and benefit-sharing. There was widespread agreement about the value of TKDLs to protect against misappropriation of TK, as well as their potential in enabling further innovation, such as in the area of public health.

The irony is that TKDL’s repository is being ignored at home. The Indian patent office is reported to have allowed several patents that infringed TK and in some instances upheld claims that TKDL had managed to stop or amend abroad! A recent case was a patent awarded to Bengaluru-based Avesthagen for a formulation using jamun and cinnamon, a claim that CSIR had managed to thwart in the European Patent Office. But in the case of the Indian patent, CSIR seems to have been sleeping.