The health effects of GM foods can only be known over the long term. Safety evaluations should take this into account 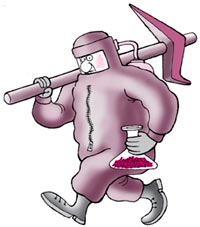 The Paris-based International Council for Science recently released a review of 50 science reviews on applications of genetics in food and agriculture. It concluded that there is no available "evidence of any ill effects from the consumption of foods containing genetically modified ingredients." But it warned that "this does not guarantee that no risks will be encountered as more foods are developed with novel characteristics." It recommended: "Food safety evaluation must be undertaken on a case-by-case basis. The extent of the risk evaluation should be proportionate to the possible risks involved with particular foods."

One worry in the case of GM foods is from 'marker genes'. (When new genes are inserted into plant cells, it is difficult to tell if the cells will take up the new gene successfully. Scientists use certain genes, called 'markers', as a kind of labelling that tells them if the gene has been successfully inserted.) It is feared that such markers could find their way into disease-causing microbes, making them resistant to antibiotics used in human medicine or livestock production. The World Health Organization has shown how most marker genes used today encode for resistance to herbicides or antibiotics. An example is the exposure of farm workers and food processors to transgenic DNA in dust and pollen. A marker gene with resistance to the antibiotic Ampicillin could make treatment for meningitis difficult among the exposed.

It is thus imperative to have clear criteria regarding the kind of toxicological studies required. The Royal Society of Canada's expert panel recommends that regulatory authorities should establish a scientific rationale to evaluate the safety of whole foods derived from GM crops. It suggests that, in view of the availability of suitable alternative markers, antibiotic resistance markers should not be used in transgenic plants intended for human consumption.

The second health fear from GM crops is they might contain allergens. One of the most widely cited examples in this respect is the case of the Brazil nut. Among those allergic to Brazil nuts, consumption can lead to anaphylactic shock and death. Pioneer Hi-Bred International Inc, a US seed company, inserted a protein-based nutrient into soybean used for animal feed. There was a very slim chance of the inserted protein also being the Brazil nut allergen. During tests, it turned out that it was. The soybean was never introduced in the market. But that was in the US, which has an elaborate regulatory and testing system.

"Our relative lack of knowledge about allergenicity suggests that we should exercise caution when assessing all new and improved foods," says the July 2003 report of the GM Science Review Panel of the UK. A report of a joint consultation in 2000 by the World Health Organization and the Food and Agricultural Organization on GM foods cautions: "If a GM food contains the product of a gene from a source with known allergenic effects, the gene product should be assumed to be allergenic unless proven otherwise." The Royal Society of Canada recommends that "approvals should not be given for GM products with human food counterparts that carry restrictions on their use for non-food purposes (for example crops approved for animal feed but not for human food)." It also suggests the creation of a mechanism for after-market surveillance of GM foods involving a new protein, as well as the creation of an elaborate infrastructure to evaluate the allergenicity of GM proteins.

The conceptual cornerstone of health assessment of GM food today remains the concept of 'substantial equivalence', which is not very clear. It means that if a novel or GM food can be shown to be essentially equivalent in composition to an existing food then it can be considered as safe as its conventional equivalent and can be assumed to pose no new health risks. The term has been borrowed from the US Food and Drug Administration's definition of a class of new medical devices that do not differ materially from their predecessors and thus, do not raise new regulatory concerns. Almost all regulatory agencies across the world recognise that it should be seen only as a key step in the safety assessment process, not a safety assessment in itself. This is because it does not characterise hazard; rather, it is used to structure the safety assessment of a GM food relative to a conventional counterpart.