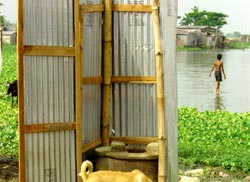 During the recently held un Commission on Sustainable Development meet (csd-12) at New York, most developing countries were crying hoarse over lack of basic data and financial resources to meet the millennium development goal (mdg) of sanitation by 2015 (see: 'Another opportunity lost', Down To Earth, May 31, 2004). But amid these voices was the lone non-complaining one of a small developing country, Bangladesh. It claimed it had a baseline survey ready and declared it had surplus resources to meet the challenge. Its confidence levels are so high that it has preponed the sanitation coverage target to 2010.

How did this wonder happen? Explains A Y B I Siddiqi, former secretary to the Government of Bangladesh (GOB), who spearheaded the campaign, "We decided to go in for a baseline survey with support from non-governmental organisations (ngos), donor agencies and local government representatives. The survey told us the exact nature of the problem. The next step was allocating funds and finally creating effective partnerships between government, donors, ngos and communities."
The credit for generating the survey goes to Bangladesh's department of public health engineering (dphe) and local government representatives. The latter were asked to go to their respective villages and find out who had latrines. They were also told to identify defects in the existing latrines. In cases families did not have latrines, the surveyors had to find reasons for the lack. "We ensured that the names of all family members are noted so that they can be traced in future," says Siddiqi.

The survey showed that 70 per cent of such people have the financial wherewithal to upgrade their latrines. The government plans to motivate such people, and in case that does not work, it will resort to punitive action. The GOB also plans to subsidise the poorest among the poor who do not have access to proper latrines. For that, it has formed task forces at national, divisional, district, sub-district, and union parishad level. Monthly meetings are to be held at all levels to monitor progress towards the 2010 goal.

The GOB has a policy to give a kit -- three rings, a slab and a water seal -- to each poor family which lacks proper latrines. The kits use very little water. They will be placed at each union parishad office and people can collect them, free of cost. Once they receive the kit, dphe engineers will guide people into making latrines.
The subsidised cost of each latrine kit is about taka 3.90 (us $0.07). 10,561,517 people are to be helped, which means a total investment of taka 420 crore (us $71 billion). If the 20 per cent population growth expected by 2010 is factored in, the total required investment would be taka 494 crore (us $82 billion).

GOB has allocated 20 per cent of its total annual local development government budget to sanitation. This means on an average taka 125 crore per annum (us $21 billion). And since the investment for sanitation is only taka 82 crore (us $14 billion) per annum, the government saves taka 43 crore (us $7 billion). But this is not all. ngos and donor agencies cover about 1,645,000 people and will further save the GOB taka 77 crore (us $13 billion ) from its total expenditure. In Dhaka city alone, ngos have promised about 15,000 latrine units.

The work has been clearly divided between government and various agencies, and proper site maps prepared. There is also a proposal for cross auditing: the government will audit ngo's work and vice-versa. The GOB has also approached the United Nations Children Fund to get the baseline survey printed so that the information can inspire other countries.