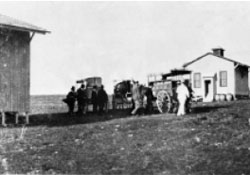 Yellow fever is a dreaded disease in the Americas and Africa. It was an even-more feared malady in the 19th and early 20th century when cures were not readily available. In 1878, some passengers from a ship that left Havana, Cuba carried the fever and spread it in New Orleans, USA after escaping quarantine.

The fever spread throughout the Mississippi Valley and as far as St. Louis; twenty thousand people died and the cotton industry lost about US $200 million. Bacteriology was a nascent discipline then and virology (yellow fever is caused by a virus) non-existent. As US’ commercial relations with Cuba were expanding, anxiety about the fever mounted. Unsanitary conditions in shanties in US cities, particularly in towns bordering Mexico, were a constant worry for health officials.

Americans accused the Spanish — who were trying to claim Cuba and parts of south USA — for introducing the disease. Havana became the focus of US suspicions and yellow fever a pretext for American imperialist designs in Cuba. In 1878, the US intervened in Cuba’s war with Spain, motivated in large measure by threats of yellow fever. But Maximo Gomez, the leader of the Cuban Liberation Army remarked that towards the end of the ten year war — that began in 1868 — when the Cuban resistance was waning, the “invincible generals June, July and August” (months when heat and summer rains breed the fever) killed more Spaniards than all the gunpowder and ammunition the US provided the Cubans. The latter had been exposed to the disease for long and that gave them some semblance of immunity to it.

In 1897, deteriorating conditions in Havana again paralysed the southern US economy.

And in December 1898, the US military took actions to sanitise Cuba from yellow fever. The occupation government coerced Cuban families to clean streets, demolish old buildings and dredge the Havana port. Since yellow fever is largely an urban disease, US troops were stationed in camps outside Havana.

These efforts did reduce mortality amongst US soldiers, but even the cleanest and most affluent parts of Havana were ravaged by yellow fever. The failure of the initial sanitary measures led to renewed interest into the causes of the fever. Meanwhile a Cuban doctor, Carlos Finlay, hypothesised that a mosquito species, Aedes spp, transmitted the fever from one human to another. A US sanitarian Henry Carter found that it took 10-12 days before the fever actually affected the person bitten by the mosquito. Experiments by the US Yellow Fever Commission confirmed Finlay’s and Carter’s findings. This led to elimination of breeding sites of the vector in Havana and by 1901, there was no yellow fever in Cuba.

But coercion to adopt sanitation methods strained the already uneasy relationship between Cubans and the occupiers. In 1902, a legislation called the Platt Amendment was introduced into the Cuban Constitution. The amendment led to the replacement of sanitation amenities put up by Cuban civic authorities with ones built by the Americans.

In 1906, yellow fever reappeared in Cuba. The US government intervened again but failed; the Americans were forced to leave the island by 1911 because of mounting casualty. By that time, Cubans had learnt that keeping their country free of yellow fever was critical to keeping their powerful neighbours at bay. Carlos Finlay, initially ignored by the Cubans for having sided with the US, was now declared a national hero who understood the science of yellow fever better than the Americans. The islanders also realised that they were in no way inferior to the US in terms of public health concerns and made parallel and sometimes spectacular breakthroughs in preventive medicine.

The early 1930s and 1940s saw the US become a near xenophobe towards its near neighbours. USbased philanthrophic organisations — such as the Rockefeller and Ford foundations —found that Central and South America, posed a risk of constant re-introduction of fevers. These organisations unleashed oppressive “[disease] sanitation” programmes. For example in Mexico, the Rockefeller Foundation started hookworm eradication knowing fully that its ends would not be met with existing technology.

The fear of imported disease by “enemies of the state” is not a new syndrome for the US. It has consistently used public health as a tool of diplomacy and subjugation in the Americans.