To counter the rapid decline of its lakes, Karnataka is creating a new authority with powers to fine and imprison encroachers and polluters. Will it be able to reverse the trend? 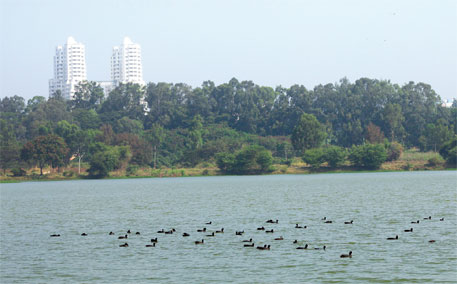 ON FEBRUARY 9, the Legislative Assembly of Karnataka passed a Bill to create an authority for management of lakes in the state. The Karnataka Lake Conservation and Development Authority Bill (2014), which has been sent to the governor for approval, provides for a Karnataka Lake Conservation and Development Authority. Though the state already has a Lake Development Authority (LDA), it has not been able to check the decline in the number of lakes or the deterioration in the quality of water. LDA chief executive officer C K Shivanna says the body is toothless because it lacks legal power. The new Bill seeks to address this shortcoming.

“The number of lakes in Greater Bengaluru has drastically reduced due to anthropogenic factors. From 207 lakes in the 1970s, the number came down to 93 in 2010,” says T V Ramachandra of Centre for Ecological Sciences, Indian Institute of Sciences, Bengaluru.

Lakes such as Madiwala, Bellandur, Horamavu, Akere, Ulsoor and Hebbal are covered by weed as sewage is allowed to flow into them. More than 50 per cent of the lakes in the city have been encroached, says Ramachandra. A survey he did in 2007 showed that 72 per cent of lakes in Greater Bengaluru have seen a loss of catchment area. His research predicts that if the urban sprawl continues to grow at the current rate, Bengaluru may lose its water bodies, green cover and open spaces by 2020 (see ‘On a downward spiral’). Setting up a new authority is, therefore, a welcome step, he says. 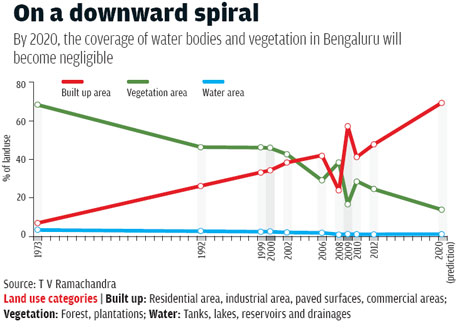 The new authority will function through a 16-member governing council, chaired by the chief secretary, and an executive committee. The governing council will also have three government-nominated environment experts. Its jurisdiction will extend to all water bodies within the limits of all the city corporations in the state and any other water body of the state identified by the government. LDA, on the other hand,had jurisdiction only over water bodies in Bengaluru and those water bodies in the state which are a source of drinking water. The most important difference between the two authorities is in their punitive powers. While LDA was not even empowered to remove encroachments, the new authority can remove encroachments, impose fines of Rs 10,000 to Rs 20,000 and imprison violators for three to five years. Even LDA officials agree this is the most crucial part of the new Bill.

Gaps in the Bill

Despite the changes, there are doubts how effective the new authority will be. Leo Saldanha, coordinator of Bengaluru-based non-profit Environment Support Group (ESG), says government-nominated experts in the governing council can be removed by the state government. This will prevent them from interfering in controversial matters, he says. He also says that the Bill allows the new authority to utilise or allow the usage of the lakes for drinking water, fishing, irrigation, education, tourism or any other purpose it deems fit. This will give it a free hand to lease out lakes to developers or hoteliers for development as has been happening under LDA.

Further, there is no role of panchayats in the new authority. The Bill also ignores District Lake Protection Committees and State Level Apex (Appellate) Lake Protection Committee which were constituted under the direction of the Karnataka High Court to provide people a platform to seek remedial measures against problems of encroachment, pollution and destruction of lakes. The aim was to settle grievances locally and promptly. The order came in 2012 in response to a public interest petition filed by ESG in 2008 against privatisation of lakes.

Shridhar Pabbisetty, chief executive officer of non-profit Namma Bengaluru Foundation, also says lack of legal power is not the main problem and even if LDA was given legal powers, the situation would not improve. But Sukhdev Singh, chief executive officer of Delhi Parks and Gardens Society, which comes under the Government of Delhi and coordinates management of parks and gardens in the National Capital Territory, has a different view. He says legal powers are crucial to make such an authority effective. He says water bodies in Delhi are under different agencies for whom conservation is not a priority and Delhi, too, is trying to set up a water bodies protection and development authority.

His view is supported by Malik Tariq, public relations and awareness officer of Lakes and Waterways Development Authority (LAWDA), a body constituted for the protection of Dal and Nagin lakes of Srinagar, Jammu and Kashmir. The authority operates effectively to conserve the Dal and Nagin lakes. He says it is difficult to take action against polluters and encroachers without effective powers. Tariq cites the example of a demolition drive the authority carried out on January 21 in Srinagar’s Astanpora area which forms a part of the catchment area of the Dal lake. “Since the authority has been formed, we have orgainsed regular drives for clearing the green belt which is a 200 m strip around the lake,” Tariq says. “As and when we get complaints, our enforcement cell along with a deputy superintendent of police (deputed for this purpose) removes the encroachments,” he says, adding, “Only sending notices to violators does not serve any purpose.” This is exactly what the problem with LDA was. It had served notices to many land grabbers in Bengaluru but could not take action. Karnataka, too, needs to adopt the ways of LAWDA, says S R Nagraj, executive engineer with LDA.

LDA was constituted as a registered society in 2002 by Karnataka to conserve and protect the lakes in Bengaluru and neighbouring area as the city was losing water bodies due to urbanisation and pollution. Currently, its main function is limited to giving clearances to detailed project reports of lake development projects to different authorities. However, it has been authorised to undertake many other tasks, says Nagraj. These include preparing environment impact assessment studies of projects proposed on lakes, environmental planning, GIS mapping of lakes, monitoring and management of water quality and lake ecology, and restoring lakes, Nagraj adds.

“But toothless LDA is contributing to a slow death of lakes,” says Saldanha. It recently failed to clear encroachments of Chikkalasandralake, the only water body in Bengaluru South taluk, which has completely dried. The lake is in the custody of Bruhat Bengaluru Mahanagara Palike, which has laid a road on the lake bed. The case shows the utter helplessness of LDA in dealing with such matters. However, how effective will the new authority be is yet to be seen because its structure and composition leave a lot to be desired, says Saldanha.