This is the story of Friends of Vrindavan, a unique experiment in conservation, which brings to attention the important role that India's religious traditions can play in protecting the environment 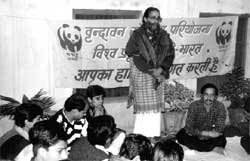 dawn breaks over a skyline of ancient temples and trees. Boatloads of pilgrims step ashore on the river bank and perform their morning ablutions. Peacock cries and the sound of temple bells fill the air. As the temperature climbs, the morning mists disperse to reveal a bustling town in which modern India comes face-to-face with a living past. Another day begins in Vrindavan, the "town of five thousand temples" in the state of Uttar Pradesh about 130 km south of Delhi. Despite its dilapidated state, Vrindavan is at the heart of Hinduism due to the relationship with Krishna, a name that is deeply associated with rural life and nature. Here, Krishna played his flute and herded cows in the forest, providing inspiration for generations of poets, artists and philosophers.

The Vrindavan Conservation Project began in the 1980s, when Sevak Sharan, a retired engineer, realised the environmental danger threatening his community. Sharan was disturbed by a particular incident when he found three men cutting down the only large tree left in his quarter of town that was home to several peacocks. He tried to stop them, but to no avail. He asked their guru to intervene, but he refused to get involved. He took the matter to the police, but they, too, did nothing. By the next day the tree was gone. Undeterred, Sharan resolved to do something. "What was the use of my chanting and worship in the temples and bathing daily in the Yamuna if I could not protect these trees and animals which were an inveterate part of religious beliefs?" he says.

Sharan began a campaign which took him to Lucknow, the state capital, and to Delhi in search of support. Meetings were organised and promises made, ideas and concerns were set down on paper. But after repeated failures, Sharan began to lose heart. Around this time I heard about him. I had been a visitor to Vrindavan since the mid-'70s and had witnessed its environmental degradation. Rural India was facing transformations in the space of 20 years that took 200 years to unfold in Europe. Western technology existed alongside rural life patterns that had hardly changed in one thousand years. The resulting disparities created huge pressures on a fragile environment. In such circumstances, I felt, India's profound religious traditions had an important role to play. I was dismayed that despite such a lot of energy vested in spiritual beliefs in India, very little of those beliefs seemed to influence environmental policies.

In 1990, World Wide Fund for Nature- uk (wwf-uk) asked me to write a book on Hindu ecology. I welcomed the chance to explore the relationship between India's spiritual traditions and its environmental problems. During a two-month research visit, I met several dedicated environmentalists whose spiritual beliefs formed a basis for their activism. Among them was Sevak Sharan, trying more or less single-handedly to combat the decline of Vrindavan's forests and wildlife. Here was my chance to help make the connection between the theoretical and the practical.

I joined forces with Sharan and together, we gathered support in the community to approach wwf for practical help. Through the contacts already built by Sharan and my own network in England, we were able to make a convincing case, and in November 1991 the Vrindavan Forest Revival Project was launched, funded in its first year by wwf International, Geneva.

The initial focus for the project was planting trees along the parikrama , the 11-km pilgrim path that encircles Vrindavan. In focusing on this sacred path, wwf involved the hundreds of thousands of pilgrims who walk the path as well as the people in the ashrams and temples lining its route. Alongside this practical work, educating the people was made a priority, and the project began to develop new approaches to environmental education in the schools of Vrindavan.

wwf commissioned an environmental curriculum in Hindi from the Centre for Environmental Education, Ahmedabad, incorporating the religious and cultural traditions of Vrindavan. It also appointed part-time "environment teachers" in each of Vrindavan's 35 schools with regular training workshops for them.

Two early experiences demonstrated the value of working in schools. The first was when the teenage daughter of the head priest of Vrindavan's largest temple won a painting competition and declared publicly that she wanted to spend her life working to restore the environment of Vrindavan. In so doing, she set an important precedent among her peers and future community leaders.

Another hopeful sign came when the community was asked to turn out in protest at the bull-dozing of hundreds of old trees to make way for a new road. To everyone's surprise, hundreds of school-going children joined with their teachers in a peaceful but powerful procession through the town. What was unique about the demonstration was that it followed the time--honoured Vrindavan tradition of religious street processions with singing and musical instruments, but directed this at a specific environmental issue. This potent combination of religion and environment immediately halted the destruction of trees.

By 1993, the project was making good progress. Seeing this, wwf India's incoming director, Samar Singh, raised its priority. He felt that the combination of education, practical work and religion gave it a special relevance to the Indian scene. He extended its programme under the banners of "greening, cleaning and education", renaming it the Vrindavan Conservation Project to reflect its broadened remit. A community advisory committee was formed to guide the project.

Around this time, an international dimension to the Vrindavan project got underway in Leicester, uk . One-third of the city's population is Hindu, mainly comprising migrs from East Africa. Here, I worked with a colleague to launch a group called Friends of Vrindavan, partly to gather much--needed funds, but also to forge cultural links between the two communities. Over the last four years, we have taken the same message to the Asian community of Leicester. We have involved them in developing the Vrindavan Gardens in Leicester, and in organising an annual cycle expedition to India to raise funds for Vrindavan.

The first Yamuna Cycle Expedition in October 1996 brought 40 riders to India to cycle about 800 km from the Himalayan source of the Yamuna River down to Vrindavan. Apart from its tremendous value in raising awareness among the participants and over a thousand sponsors, it raised over 20,000 (us $) for work in Vrindavan. Friends of Vrindavan are pledged to continue organising this event in October each year. At the time of writing this article, the 1997 expedition has successfully completed.

Friends of Vrindavan is now helping to bring together a coalition of non-governmental organisations (ngos) that share a concern for the culture and environment of the Vraj region, of which Vrindavan is a part. Indian Oil Corporation, whose refinery in Mathura is the largest industrial concern in Vraj, is also lending their support to this effort. The Vraj Seva Mandal, as the coalition is named, is in the process of developing a coordinated programme of action to tackle the region's problems, including sanitation, environmental planning, restoration of cultural heritage and protection of the many sacred groves scattered throughout Vraj, which are often the sole surviving remnants of the original forests of Krishna. They are also important sanctuaries for wildlife and offer water resources.

Friends of Vrindavan and the newly-formed vsm are dedicated to bringing about a renaissance of nature and culture in Vrindavan and Vraj. Vrindavan is not just another town on the map. It is Krishna's abode and a powerful centre of spiritual energy. If here, at such a sacred place, the balance of nature is under threat and the elements are poisoned, what does this signify for the well-being of the rest of the planet? On the other hand, if Vrindavan's woodlands and wildlife flourish once again, then a message of hope will be sent to all of India and to the world.

Ranchor Prime is a teacher of Krishna consciousness. He works as a freelance writer and broadcaster.