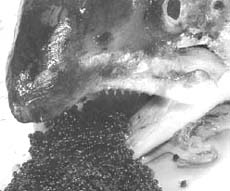 The world's three biggest caviar-exporting nations have agreed to stop sturgeon fishing in the Caspian Sea for the rest of this year to save the fish from extinction. Sturgeons of the Caspian Sea are threatened due to the increasing demand for their pickled unfertilised eggs called caviar. The sea is home to about 80-90 per cent of the world's sturgeon population. Azerbaijan, Kazakhstan and Russia agreed mutually to implement a 12-month action plan to save the sturgeons during a meeting of the standing committee of un's Convention on International Trade in Endangered Species (cites) of Wild Fauna and Flora held in Paris, France, from June 19-22, 2001.

During the meeting, cites deferred from limiting the amount of caviar each of the country can legally export to 20 per cent of current foreign sales. Instead, the nations committed themselves to a series of urgent measures aimed at improving management of sturgeon resources. A ban on caviar exports would not effectively address problems such as rising domestic trade, poaching and illegal exports, say officials of traffic, the wildlife trade monitoring programme of World Wide Fund for Nature (wwf). cites estimates that illegal sales of caviar by the Caspian Sea countries excluding Iran, where the business is still closely regulated, are 10 times the legal trade. The caviar business of these countries is worth about us $1 billion a year in revenue, but only some us $100 million is generated from official sales and exports.

cites has warned that Russia, Azerbaijan, Kazakhstan and Turkmenistan will face the prospect of a full suspension of their caviar exports if they do not take adequate conservation measures. The 1997 meeting of the Conference of the Parties to cites listed all species of sturgeon on cites' appendix ii. This means that all caviar exports must comply with strict cites provisions, including the use of permits and specific labelling requirements. To obtain the necessary quotas for export, it must be shown that the trade is not detrimental to the long-term survival of the species.

Fishery officials in the Caspian Sea states have reacted angrily to the threat of a ban. They claim that they are being singled out for punishment. "For several years, we have been asking the world community to help us. The Caspian states are no more responsible for the situation than the developed countries who buy and resell caviar," said Tariel Mamedli, deputy chief of Azerbaijan's state fishing company.

Iran, another sturgeon fishing country of the Caspian Sea region, is not facing restrictions because its management for sturgeons is relatively effective. Turkmenistan, which was not represented at the meeting, will need to confirm in writing that it will adhere to the decisions taken or face a complete ban on its caviar exports. As per the agreement, Azerbaijan, Kazakhstan and Russia will be allowed to sell caviar already in storage from the spring harvest up to their permitted 2001 quotas. Once these inventories are exhausted, no further caviar can be sold until the 2002 quotas are fixed, which will depend on the action taken by the Caspian states to preserve the fish stocks.

These states have time until the end of 2001, to agree on the coordinated management of the sturgeon resources. They have to conduct a comprehensive survey of the sturgeon stocks, ask Interpol to analyse the illegal caviar trade, call on the cites secretariat to conduct a study of enforcement needs for combating illegal harvesting and trade, and permit and facilitate cites on-site inspections of their sturgeon management activities. In addition to this, till June 20, 2002, the countries have to improve their fishing practices by incorporating latest technology and techniques. Any failure on their part to implement the agreement will result in no quotas for 2002.

The situation in the Caspian Sea is particularly alarming with the number of adult sturgeon registering a decline of almost 70 per cent over the years -- from 142 million in 1978 to 43.5 million in 1994. Catches have dropped from 22,000 metric tonnes in the late 1970s to about 1,100 metric tonnes in the late 1990s due to the rapid decline of the fish stocks. Environmental experts attribute the decline to political and economic disarray in the former Soviet Union, whereby, regulations have proved to be ineffective and economic hardships have induced people to fish sturgeons on a large-scale for survival.
Caviar producing sturgeon are one of the world's most valuable wildlife resources, and it is vital that they be managed in a sustainable manner," said Klaus Toepfer, executive director of the United Nations Environment Programme (unep). Experts opine that sustainable harvesting is one way to save the fish. Artificial breeding, which includes breeding young sturgeon in fishpond farms with its further development in natural and artificial conditions, has proved to be successful in Germany, France, Italy and Hungary.

A Russian government farm has evolved a method to stake out the sturgeons eggs without killing the fish. The method involves giving the sturgeon a hormone injection to stimulate expulsion, followed by a stomach massage. If that fails the fish is cut open under aesthetic conditions, and then stitched up again. Also, net fishing, a technique often used in the Caspian to catch sturgeons, should be banned. It is wasteful and destructive, because nets kill immature sturgeon along with caviar-bearing adults (see box: Sturgeons and caviar).

But, such measures can only be effective when the large-scale fishing of the species is curbed. "The cites meeting is a positive step but much more needs to be done if these countries are to effectively address the catastrophic impact of illegal trade and growing domestic markets on the survival of sturgeon species," said Caroline Raymakers, acting regional director of traffic Europe. "The voluntary ban is a significant achievement, but only if it is effectively implemented," said Craig Hoover, senior programme officer for traffic.