Search for a good hearth

While cook stoves in India are becoming fuel-efficient, they are not improving air quality, finds study

Search for a good hearth 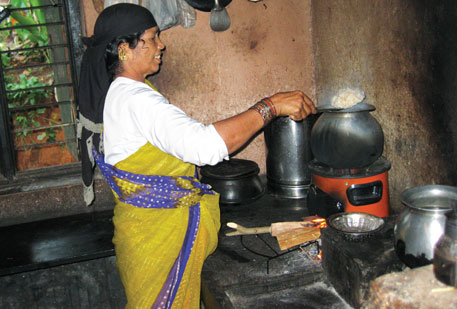 To think that something as basic and age-old as cooking is also a cause of air pollution and diseases, is not easy. Our traditional chulhas burn biomass and release small particulate matter and carbon monoxide (CO) in the air. The Indian National Census 2011 shows 780 million people use solid cooking fuels.

In the Global Burden of Disease 2010 assessment done by the World Health Organization (who), around 1.04 million premature deaths and 31.4 million disability-adjusted life years were attributed to household air pollution resulting from solid cooking fuels in India, accounting for 6 per cent of the national disease burden. For the last 25 years, the Indian government has run and supported initiatives to build solid fuel-based stoves with lesser emissions. In 2009, the government started the National Biomass Cookstoves Initiative (NBCI). Till today, it has approved 17 cook stove models for domestic use. But till date, their impact on reducing air pollution has not been assessed.

A study published this October in the journal Eco Health by a group of scientists in India and the US has looked at some advanced cook stoves for their ability to improve air quality in communities where they are used. The study is unique since not only did it measure the level of pollutants in the houses where the advanced cookstoves were used, but also surveyed extensively to assess the acceptability of these stoves in the community and identified the challenges faced by their real users.

Six commercially available models of cook stoves were selected for the study—three models of natural draft-rocket stoves (Envirofit-B1200, Envirofit-G3300 and Prakti-Leo), a natural draft micro gasifier stove (Philips-Natural Draft) and two models of forced draft micro-gasifier stoves (Philips-HD4012-Forced Draft and Oorja). The stoves were distributed in seven villages in three districts of Tamil Nadu and Uttar Pradesh between May 2010 and December 2011. The study was conducted in three phases. In Phase I, baseline measurements of pollutants over a period of 24 hours in the kitchen were made, when chulhas were in use. Phase II and III were conducted one month and six months after the test stoves were installed.

Of the six stoves that were studied, none came close to meeting air pollution guidelines prescribed by the WHO. The stoves did not even meet interim standards (see interview). Using advanced stoves reduced the requirement of fuel by 30-40 per cent but the time spent near the stove remained either unchanged or increased in comparison to traditional stoves. The rocket stoves allowed charging the stove with the required quantity of fuel for a full meal, whereas the Phillips and Oorja stoves required re-charging within a single meal period. This resulted in spending ever more time close to the stove.

Surprisingly, the stoves with best impact on air quality were found to be least customised for usage in rural settings. For example, the Philips-HD 4012 Forced Draft stove was the only one to show statistically significant reduction in PM 2.5 (62.7 per cent) and CO (78 per cent) but was very cumbersome to use. Clearly, user requirements were not understood well enough before designing the stoves.