Armed with a feather and a memory, Vivek Ramachandran pitches for saving the last 300 Narcondam hornbills from radar station 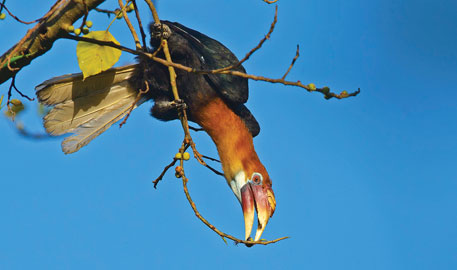 NARCONDAM HORNBILL, an endangered bird found only in the Narcondam island in the Andamans, could be the first victim of the new government’s decision to strengthen national security. The habitat of the bird species, with a population of just 300, is under threat because of the government’s nod to construct a radar station on the island.

Though much has been written about the bird in the recent times because of the proposed radar station, my first encounter with the Narcondam hornbill happened way back in 2002, when I decided to study its ecology for my Masters dissertation. I suppose my fascination with this bird lay in the fact that it was found only on this one particular island of Narcondam. I dreamt of answering the question of why they had chosen to live there. And when I reached Port Blair, I also dreamt of lying on a pristine beach and sipping fruity drinks. Little did I know that it would take one month of bureaucracy and running around to get permissions. What kept me going was that I would be retracing the footsteps of the great biologists and explorers A O Hume, E C Stuart Baker, HumayunAbdulali and Jacques Cousteau.

The light at the end of the tunnel made the effort worthwhile. A three-day journey from Port Blair had me looking up, awe-struck at the towering cliffs and lush greenery that made up the Narcondamisland. I left the boat that brought me about 60 metres away from the shore, and waded out with my luggage. It was then that I happened to look up at the cliffs on my right, and spotted my first pair of hornbills. That image is etched in my mind and is not something I will forget soon. 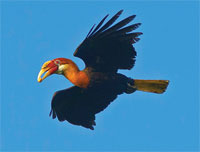 In the coming months, my bond with these birds strengthened. And what surprised me the most, was the humanism of their relationships. Seeing the juvenile birds flocking at higher altitudes only reminded me of human teenagers, trying to get away from their parents who, in this case, discreetly supervised them from a lower altitude. Or watching the hornbills fight with other bird species for nest cavities. Anyone who has ever seen a fight over parking spaces in residential areas, will definitely know what I am talking about. But the most important lesson was probably learnt when I saw a pair of hornbills ward off a monitor lizard that came too close to their nest. That particular lesson came handy when I had to fend off a seven-foot long lizard curious to know what I was doing in the forest. Needless to say, those evasive techniques worked equally well on people with the same sort of curiosity.

The Narcondam hornbill, whose scientific name is AcerosNarcondami, was first described by Hume in 1873. David Prain, the then director of the Royal Botanical Garden in Calcutta visited the island in 1892 and briefly described its vegetation. But due to its isolation, the island has been visited only by a handful of biologists in the subsequent years. The limited shoreline of the island is clothed by littoral forests and the lower slopes by moist deciduous and semi-evergreen forests. As one ascends up the steep volcanic slopes the vegetation becomes evergreen and the crater at the top is covered by stunted cloud forests festooned with epiphytes and lichen and carpeted by ferns.

The island has no terrestrial mammals except for rats and goats and a cat, obviously introduced by the police personnel. The island is home to the giant fruit bat and a smaller fruit bat that is also endemic to the island. The late ornithologist Ravi Sankaran was instrumental in getting most of the goats off the island after his survey in 1997 found that the goats were severely affecting the regeneration of the forests by browsing on the saplings of the forest trees.

The island is the only place in India where the paradise tree snake or flying snake is found. It is also home to the Banded Sea Krait that are abundant in and around the unmanned lighthouse on the north-western shore. At nights, the forest floor is covered by land crabs. The offshore waters are teaming with marine life with giant manta rays, schools of Indo-pacific king mackerel, yellow-finned tuna, giant barracuda, sail fish and variety of reef fish abound.

I returned from that island three months later, with a sense of camaraderie towards the hornbills, and a discarded feather as a memento. But after all these years, it was not the birds, the people, or even the monitor lizards that made me sit up and take notice of the proposed radar station for the island. At the risk of sounding theatrical, it was because I was there when it all began. 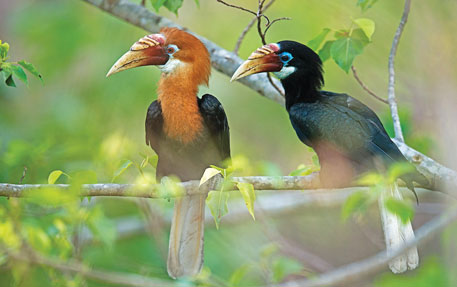 The soldiers appeared innocent enough, coming to scout for a location for an observation post. As someone well versed with the routes on the island, I was happy to accompany. In my enthusiasm, I was made an unwitting accomplice in their plan to convert those less travelled paths into tarred roads, and the island into a radar station. In hindsight, pointing out hornbills to them along the way, probably wasn’t one of my brightest moments.

Having said that, I do not wish to use the ignorance of a 22-year-old as an excuse to undermine the arguments in favour of the radar station. The geopolitical importance of Narcondam is undeniable, primarily due to its location, being on the sea links between the Straits of Malacca, Kolkata, Chittagong and Yangon. A radar station built on this island would certainly provide a strategic advantage.

However, building the same station on the nearby Landfall island could prove to be an equally effective alternative for improving regional security. We were overjoyed when the previous government shelved the idea and thought that, we may just have prevented the death of the 300 odd hornbills that have chosen to make Narcondam their home. Now, with our Union minister for environment taking a personal interest in this project, it may well be the knockout blow for the island and its precious denizens.

In the time I spent on the island, I may have failed to answer the question why these birds live only there and nowhere else. However, I can definitely say with conviction that any decrease or sudden change in their habitat can cause irreparable damage to an already fragile population. It’s time to pull out all the stops, and go to the mattresses. But the solution lies not in a futile war, but a mutually beneficial truce between the warring parties.

Some might say I am being diplomatic in my response, while others may call me biased. I certainly plead guilty to the latter. But I also consider myself a realist, which is why I am preserving that feather I brought from the island. Just in case we need to resurrect the population at some point in the future.