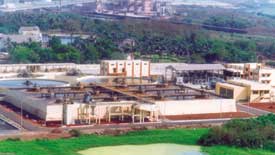 When the monsoon played truant in 1992, officials of the Mumbai-based Rashtriya Chemicals and Fertilizers Limited (rcf) realised that the water-dependant company had to find alternatives to municipal water supply. They proposed rcf recycle sewage to run its plants.

"The cooling towers of our plants require round-the-clock water supply. Any shortfall trips the unit; some plants take more than 2 days to recover. In 1992, our plants consumed about 28 million litres of water a day. 20 of them had to be closed down for 15 days in 1992 due to water shortages that ensued after monsoons got delayed, that year; we lost more than Rs 50 crore. It was then that we decided to think of alternatives to municipal water supply," recalls P T Desai, deputy general manager, corporate communications, rcf .

rcf had two options: a plant to desalinate seawater, or a sewage treatment plant (stp). "Our plants require water with low levels of total dissolved solids (tds). So seawater, which has a very high tds content, was ruled out. Treating this water would have required high-energy inputs. So, we proposed an stp, " says Desai, who was in charge of the project. "The rcf management cleared the project. But they wanted to make sure that the quality of the treated water would in no way be inferior to the water supplied by Mumbai's municipality, Brihanmumbai Municipal Corporation (bmc, now called Municipal Corporation of Greater Mumbai). So, they also asked for a reverse osmosis (ro) unit," he adds. Armed with his superior's sanction, Desai approached bmc , which to his surprise, decided to act difficult.

The reluctant municipality finally gave rcf the green signal in 1995, but with certain conditions. " rcf had to pay the municipal corporation 60 paisa for every litre of sewage recycled. We had to sign a ten-year contract with the bmc," says Desai.

"We agreed. N ow, the challenge was to get the sewage required by the stp: about 20 million litres, everyday," he says. Chembur's sewage was the best option because the stp was located in this suburb of the metropolis. But things were not easy. "Our cooling plants required a constant water supply. So, the stp had to be on the job throughout the day. It, therefore, required a steady sewage supply, which the Chembur zone could not provide. Here, heavy sewage was generated only in the mornings and in the evenings," points out Desai.

rcf then decided to tap an open nullah that carried 100 million litres of sewage, every day, from three suburbs in Mumbai -- Chembur, Ghatkopar and Kurla. The nullah assured sewage supply, but a 5 kilometre (km)-long pipeline was required to connect it to the stp. C learances were also required from government authorities such as the Public Works Department and the Mahanagar Telephone Nigam Limited.

Finally, in 2000 -- eight years after conception -- the fertiliser company's stp-cum- ro unit began operations. Built at a cost of Rs 40-crore, the plant can treat about 20 million litres a day. But it runs at half its capacity today. This is because the rcf has decided to reuse wastewater as part of its plans to cut down water consumption. Also, two of the fertiliser company's plants are shut down for want of natural gas.

The 5 km-long pipeline brings raw sewage to the stp, where it's treated. The ro uses four membranes to clean wastewater. The sludge generated during sewage treatment is used as fertiliser. Many industries abroad do use sewage, which has undergone primary, or even secondary, treatment. They only do tertiary treatment. Desai claims rcf is the first Indian company to use sewage after treating it totally in its plants. "This is a milestone," he exults.