During the Auto Expo 2000, most carmakers were seen going ahead with diesel models. But the makers of two-stroke two-wheelers decided to announce an emissions warranty on their products. A small step forward 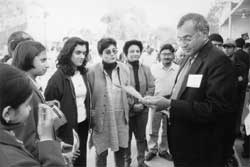 it was an all-out attempt to paint a green picture of the auto industry. Close on the heels of a number of Supreme Court orders castigating the automobile industry for the growing air pollution in Delhi, the industry tried its best to put on an eco-friendly face at the Auto Expo 2000. Held in New Delhi from January 12 to January 18 it is the largest of its kind in Asia, barring the one in Japan. But all the glitter could not overshadow the deliberate attempt by the industry to dieselise the auto fleet. It is now a well-known fact that diesel-run vehicles are major contributors to air pollution especially particulate matter. In total disregard of the strong public campaign against particulate pollution in Delhi, there was an onslaught of diesel versions of many models - more than eight companies launched as many as nine new versions of diesel vehicles.
However, there was some good news for those campaigning for clean air. The Centre for Science and Environment ( cse) , a Delhi-based non-governmental organisation, had put up a Right to Clean Air exhibition highlighting the dangers of air pollution ( see box : Lest we forget...). One of the action plans suggested by cse was emissions warranty for all vehicles and particularly for two-stroke two-wheelers with catalytic convertors. The automobile manufacturers accepted this. Venu Srinivasan, president, Society of Indian Automobile Manufacturers (siam ), announced an emissions warranty for two-stroke two-wheelers with catalytic converters up to 30,000 km with immediate effect in Delhi. "The industry has always been criticised for being reactive and acting only under pressure, but emissions warranty is one of the most proactive decisions taken by the industry," said Srinivasan.

In order to deal with the problem of emissions after the car has hit the road, countries like Sweden and the us now insist that automobile manufacturers provide an 'emissions warranty' for a specified mileage of 80,000 km or five years after sale. If the vehicle is still found to be properly maintained but its emissions exceeded the standards during this duration, the manufacturer has to bear all costs of repairing the vehicle. The system of 'emissions warranty' is accompanied with a 'recall system' under which the government regularly collects a sample of a brand of cars of a particular year which have run for about 45,000 km. If the sample fails the test, the manufacturer has to recall all the cars of the particular brand and repair them. This system has forced even the best companies - from General Motors in the us to Mercedes Benz in Sweden - to recall their vehicles.

Srinivasan admitted that emissions warranty had materialised as a result of cse 's "one-to-one dialogue" with the automobile industry prior to the Auto Expo 2000. "This is an important step as, for the first time, vehicle manufacturers have looked beyond the factory gate. Other manufacturers must also emulate and accept emission warranty for all kind of vehicles," says Roychowdhury.
While on the one hand, emissions warranty for two-wheelers was indeed a step forward by the industry, on the other hand, the introduction of more diesel cars at the exhibition was a source of worry. Among them were Telco's Magna, Ford Ikon, Fiat India-Sienna Weekend, Toyota's Qualis and General Motors' Opel Vectra. What was perplexing was the way various car company representatives justified their purpose for investing in diesel cars. "Because it sells" was the short and simple answer of one engineer at the Hyundai pavilion, which launched the diesel version of Accent."Our market survey between 1994-1996 shows that there is a high preference for diesel vehicles," said Ashwin Kumar of Toyota Kirloskar Motor. However, Roychowdhury says that people do not prefer diesel. They only prefer cheap fuel.

When Down To Earth reporters talked to industry representatives about the pollution from diesel cars, the answer was even more shocking: customers are not concerned about the environment or pollution when they buy vehicles. "There are very few who bother to enquire about emissions. They only make sure their vehicles meet the Euro ii norms," said Arun Arora, deputy manager of corporate communications at Maruti Udyog. However, Anton Freiesleben, vice-president, marketing, Volvo, said, "No operator is willing to pay a single extra rupee for the environment, but we believe in strict regulations."

"It is the responsibility of the manufacturers to inform clients about the emission levels of the vehicles. That customers are asking about Euro ii compliance, shows that they are aware - and this is only due to the Supreme Court," says Anumita Roychowdhury.

Distinct from the onslaught of new vehicles by various auto companies was the 'Green Pavilion', the industry's lip service to the environment at the exhibition. Put up by the Society of Indian Automobile Manufacturers ( siam ) and sponsored by some companies, the pavilion sought to put the onus of pollution control on consumers and the poor while absolving the auto industry totally. In many of the interactive sessions, the volunteers harped on the uses of catalytic convertors. "By asking the consumers to use catalytic converters, the automakers are passing on the buck to the consumers. Their agenda for clean air was to ask consumers to maintain their vehicles and plant more trees," said one visitor at the pavilion.

"By adding that their vehicle was 'green', companies seem to add a measure of respectability to their vehicles," adds Roychowdhury.

Experts say that automakers have accepted the emissions warranty only on principle. They say that the ball is now in the court of both the government and the industry who must now implement this proposal by putting in place the legal processes. Unless the government and the automakers make a determined effort to invest in cleaner fuel technologies like compressed natural gas , liquefied petroleum gas and electric two-wheelers, the air quality levels in the cities will only change for the worse.