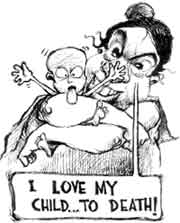 "Guard well your baby's precious head,
Shake, jerk and slap it never, Lest you
bruise his brain and twist his mind, or
whiplash him dead, forever"

writing in the us medical journal Pediatrics in 1974, paediatrician John Caffey was making a point that few have taken. In November 1997, Matthew, eight-month-old son of Sunil and Deborah Eapen, died in Chicago, the us , after being shaken and slammed by Louise Woodward, the 19-year-old au pair of the Eapens. The following court case sparked a flurry of debates ranging from family values to the system of having paid non-family members looking after infants. But for the medical community, the controversy brought to light the disastrous consequences of violently shaking children - a common practice, even when no harm is intended.

Matthew's was a clear case of child abuse by violent shaking, or what is known as "shaken baby syndrome" ( sbs ), says P S N Menon, additional professor of paediatrics at the All India Institute of Medical Science ( aiims ), New Delhi. " sbs is not a new phenomenon and is prevalent in most developed countries," he points out. He added that sbs cases are well documented.

"Despite increased awareness of the presence of child abuse, nearly 1,100 children still succumb to fatal shaking or blunt traumatic injuries inflicted by adults each year in the us ," wrote Robert M Spear and his team at the Children's Hospital and Health Center at Coronado, California, usa , in a letter to the editor in the American Journal of Diseases in Children (Vol 146, December 1992). "Nearly 1,50,000 children suffer serious injuries and many are permanently disabled," Spear indicated. The authors cautioned paediatricians to identify any symptoms that indicate child abuse due to sbs , to prevent further abuse - or even death.

sbs is characterised by bleeding within the skull and the eyes, even though there are no external signs of head injury. Yet, there can be substantial bleeding within the brain or a cerebral injury leading to permanent neurological disorders. This can also cause mental retardation and physical handicap. Infants who have suffered injuries resulting from vigorous shaking experience bleeding of the retina before physicians can identify subdural haematoma (bleeding within the covering of the brain). Matthew's autopsy revealed retinal haemorrhage.

"The ophthalmologist may therefore be asked to evaluate an early manifestation of this condition before the complete evolution of its neurologic complications," wrote W Scott Wilkinson and his team in the journal Archives of Ophthalmology (Vol 107, October 1989). Between 1983 and 1988, Wilkinson's team studied 14 successive cases of sbs at the child protective services of University of Michigan, the us. Paediatricians sent children who revealed symptoms of sbs for physical examinations and radiological studies. Those with symptoms of intracranial injury underwent computerised tomography ( ct ). Ophthalmologists checked for internal eye injuries. They found the severity of bleeding inside the eye correlating with the severity of the neurolo-gic injury. In short, if the baby shows signs of internal eye injury, it is likely to have suffered severe injury to the brain or the nervous system due to sbs.

This phenomenon is fast catching the attention of physicians, says Menon. In India, he notes, sbs is hardly reported as working parents generally leave their children with an old nanny or a relative. However, Menon adds a note of caution. "The only solution is to create public awareness - especially in young working parents - of how shaking babies can lead to dire consequences."