Shark in a soup

The fish, high in demand for its fin, is dwindling in the Indian waters. Will a mere ban on finning protect it?

Shark in a soup 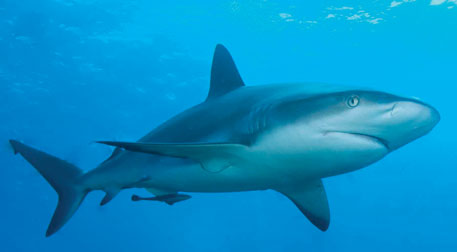 Seventy five-year-old M Zakharias’ otherwise dull eyes glisten with pride as he narrates how he and his friends used to catch sharks five decades ago. They would venture into the sea in catamaran, a raft made of logs tied toge ther, taking a long thick cotton line and a few hooks as their hunting tools. “Sharks were abundant in our waters then,” he recalls. “We didn’t have to go far from the shore to catch them.” Fishers would return home in a day or two once they managed to get the amount of catch their raft could carry. 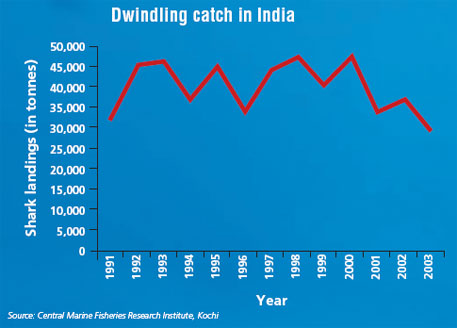 Zakharias belongs to the artisanal fishing community of Thoothoor, a coastal village in Tamil Nadu’s Kanya kumari district. Thooth oor’s fishers are known for their shark-fishing skills. Over the years they have shifted to diesel-engine boats fitted with GPS and sonar fish-finders, leaving their rafts and rowing boats behind. Thoothoor’s fishers now fish across the country’s two million square kilometres of territorial waters called Exclusive Economic Zone. “Now we stay in deep sea for more than a month, depending on the fishing ground and catch,” says Justine S,

But there is something bothering the Thoothoor fishers lately. “Now we have to go upto the Pakistan boarder in the West and Bangladesh in the East for a good catch,” says S Vijayan, who has just returned from a fishing trip. “We don’t get sharks as much as we used to get earlier.”

Indiscriminate fishing
A study commissioned by the European Commission names India as the second biggest shark catcher after Indonesia. The study was commissioned after the Conve ntion on the Internat ional Trade in Endangered Species of Wild Fauna and Flora (CITES) announced special attention for the species in March this year. Between 2002 and 2011, India along with Indonesia contributed 20 per cent of the world’s shark catch, notes the study, published in July this year.

This is despite the fact that India has been witnessing a declined catch since 2000. According to the Central Marine Fisheries Research Institute (CMFRI), Kochi, shark catch in the country peaked to 47,207 tonnes in 1998 from 31,967 tonnes in 1991. The trend continued till 2000, after which the catch started declining. In 2011, CMFRI reported just 26,746 tonnes of shark landings on Indian ports (see ‘Dwindling catch’).

“The main cause for the reduction is indiscriminate exploitation in the past two decades,” says P U Zacharia, head of the demersal fisheries division at CMFRI. An assessment by CMFRI shows only 100 of the 500 registered targeted shark catching boats are engaged in fishing shark. The rest prefer tuna fishing.

Thoothoor’s fishers admit overexploitation could be a reason for the declining shark catch in the Indian waters. “But artisanal fishers should not be blamed for this,” says V Romanse, secretary of the Association of Deep Sea Going Artisanal Fishermen in Thoothoor. He blames big trawlers and commercial ships for the decline. There are about 80 commercial ships which have Letter of Permit (LoP) from the Union Ministry of Agriculture to directly export the catch from the sea without landing it at ports. Romanse alleges that these ships are taking away most of the catch. Besides, there are always threats from foreign poaching vessels that come on the fringes of India’s EEZ and fish in the Indian waters that harbour about 70 shark species.

Fin fetches fortune
Traditionally shark was caught for its meat and liver. Since shark meat was not much in demand either in the domestic or international market, it was never a prize catch. It captured global attention in the early 1980s, when China began importing shark fins for making shark soup, a delicacy (see ‘Elite pleasure’). The surge in demand resulted in indiscriminate shark fishing. To cash in on the booming market, several East Asian countries such as Singapore, Taiwan, Malaysia and Indonesia also started importing fins and exporting those to China. India exports shark fins to mostly to China as well as other East Asian countries. Traders say shark fin accounts for 40 per cent of the total value of a shark. While its meat costs about Rs.125 a kg, fins are sold at a much higher rate, depe nding on size, texture and colour. Arul Geethan, a fish trader in Thootho or, sells small fins of 5-10 cm to exporters in Chennai and Mumbai at around Rs.1,000 a kg. A kilogram of bigger fins, more than 40 cm long, fetches him upwards of Rs.5,000. In the international market, small fins sell at about $100 a kg and ist value rises with the size.

Lately, there has been a substantial hike in fin prices in the international market. According to the Marine Products Export Development Authority (MPEDA), India exported 195 tonnes of shark fins for $14.99 million in 2011 against 960 tonnes worth $2.74 million in 1998.

MPEDA’s data corroborates this suspicion. Between 2002 and 2011, the annual shark catch was more than 25,000 tonnes. Given that fins constitute seven per cent of the weight of a shark and that there is little market for shark fins in the country, India should have exported at least 1,500 tonnes of fins a year. But official data shows India exported just 195 tonnes of fins in 2011 and 147 tonnes the following year for landings of 25,425 and 26,716 tonnes.

N Ramesh, director of MPEDA, denies any possibility of illegal exports. “We have not received any report regarding illegal exports from the customs,” he says. But a 2004 study by Zeke Hausfather, researcher at Grinnell College, Iowa, shows shark fin exports from India are on an average 5.18 times greater than that reported by MPEDA. 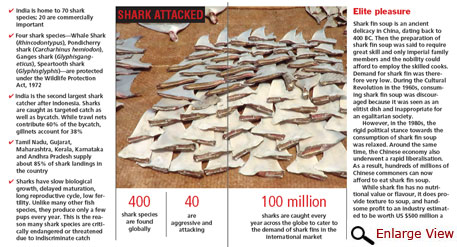 The high-profitability of shark fins in the international market has led to a cruel practice of removing fins, says C Samyukta, campaign manager of USbased Humane Society International in India. “Sharks thrown back into the sea after finning could be still alive. Not being able to swim, they would sink to the bottom of the sea and die a slow and cruel death,” says she. But the practice is profitable as it enables fishing vessels to store and transport only the fins, the most valuable part of shark. In India, this practice violates the Wild Life Protection Act (WPA), 1972 as well as the Prevention of Cruelty to Animals Act 1960. But of the 70 shark species found in Indian waters, only four are protected under Schedule I of WPA, Samyukta says.

Following campaigns by several conservationists for a policy against such cruelty, the Union Ministry of Enviro nment and Forests on August 21 prohibited removing fins of shark on board of a vessel in the sea.

Under the new policy all sharks landed should have fins naturally attached to it. “We welcome the policy as a first step towards conservation of sharks,” says Samyukta. “But there is a long way to go.”

Vincent Jain, executive officer of South Indian Federation of Fisher men Societies, however, criticises the ban, saying traditional fishers had never engaged in the cruel practice of finning. Big ships and trawlers used to do it till a few years ago. Since 2005, even they have stopped the practice, Jain claims. This could be because of rising demand for shark meat within the country or strict import policies of countries like the US, he adds. Jain says the government should consult fishers communities and its own research institutions like CMFRI before taking any fisheriesrelated decision because it affects the livelihood of thousands of people.

Analysts say the policy will not yield the desired result without strong monitoring mechanism. For instance, the authorities fail to monitor the activities of LoP vessels that are permitted by the Union Agriculture Ministry to directly export their catch from the sea, and assume their reports on the catch to be true. “To ensure that LoP vessels’ reports are foolproof, the government should appoint observers on board, or stop mid-sea transfer of fish and ask the vessels to land all the fish they catch and then export it from ports,” says Y S Yadava, head of Bay of Bengal Programme of the FAO.

There is also a need for banning fin exports, says Zacharia. After all, market incentives and disincentives play a crucial role in conservation.

Needed: sustainable management
Unlike many other fish, most shark species do not attain sexual maturity until the age of seven and give birth to a few pups a year. “These characteristics make them highly vulnerable to indiscriminate exploitation,” says Zacharia. Since shark is a top predator of ocean, its overfishing poses a threat to the marine ecosystem, he adds.

In 1999 FAO introduced International Plan of Action for the Conservation and Management of Sharks to ensure their conservation and sustainable use. It suggested that member countries develop a National Plan of Action. India, despite being a founding member of FAO, is yet to prepare the plan. In 2001, it announced a ban on shark fishing. This sparked protests from fishers, following which the government restricted the ban to four shark species, enlisted in Schedule I of WPA.

“The ban was imposed without taking fishers into confidence and addressing the livelihood concerns of traditional shark hunting communities,” says Jain.

For sustainable management of sharks, the government first needs to assess its status, says Zakharia. But so far we do not know enough about it, he adds. CMFRI has begun working on a national research project on sharks.

Yadava says, protection and conservation of marine resources is possible only through the participation of fishers in making as well as implementation of policies. Under the Bay of Bengal Programme, member countries—India, the Maldives, Bangla desh, and Sri Lanka are formulating management plans for sharks and promoting sustainable livelihood in consultation with artisanal fishers. The Maldives has formulated a policy in this regard and declared its exclusive economic zone as shark sanctuary in 2010. Sri Lanka has also formed a draft national plan.

“In India, we decided not to take top to bottom approach because of its vastness and high number of fishers engaged in shark catching. All the traditional shark catching communities like those in Thoothoor, Veraval, Porbandar have been brought together and asked to prepare a management policy,” says Yadava. He is hopeful India would be able to prepare a management plan by the end of the year.