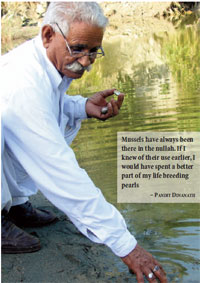 It started with a check dam. Four years ago, Pandit Dinanath was at the fisheries department in Una district, Himachal Pradesh. He was there to find out about subsidies for check dams; he wanted one on a nullah behind his house. A few days later, officials from the department visited the area. While at the inspection, one of the officers picked up a shell from the nullah and put it in his pocket, recalled Dinanath, addressed as Panditji by villagers. Curious, he posed a question to the officer. “You can make pearls from these mussels,” was his reply. A conversation on pearl culture followed and instead of a check dam, Panditji ended up making two ponds. A traditional healer by profession, Panditji fretted about the lost opportunity: mussels were always found in the nullah. At 72, he decided not to waste any more time and joined a 10-day course on pearl culture at the Central Institute of Fresh Water Aquaculture in Bhubaneswar in Orissa. There, he learnt how to breed mussels and induce pearl formation. Now, Panditji is inspiration to several other farmers in the district. The fisheries department also trains farmers on freshwater pearl culture in batches. Seven farmers have started work. “I have sold 50 pearls in the past four years,” said Panditji, “at Rs 5,000 each.” Sales records from his bill book showed his pearls are popular in Himachal Pradesh, Punjab and Delhi. “As is the case with other gems, if a pearl does not suit somebody, it would result in adverse effects. But if it does, life would change for the better,” Panditji asserted. The negatives start to show early enough, he believes. “A person spent his month’s salary the day he bought a pearl from me. If it doesn’t suit you, it might make you restless too,” he said. Panditji’s first buyer escaped unhurt from an accident on his way back from Una. “Destiny, or, the pearl?” Panditji wondered, his eyes fixed at the two ponds he owns in an acre. Of the two ponds, the embankment of one gave in during the rains this year and the pond dried. “So many of my mussels got washed off. This means loss of crores of rupees,” he said and pointed to a heap of shells lying next to the pond. Mussels take time to breed. The ones translocated take about six months to acclimatize to their new environment and only then pearl culture can begin. Moving mussels is not an impossible task. Enclosed between two shells, mussels are sluggish and can be easily caught from the shallow edge of the pond where it is usually half-buried in the sand. “Not all mussels produce pearls. Of the three species we have in the rivers of Himachal, Lamellaedense marginelis is suitable for pearls,” said Ashok Verma assistant director of Una fisheries department. Verma had roused Panditji’s curiosity when he pocketed a mussel in 2005.

A pearl is naturally formed by a sand grain, which a mussel ingests while feeding on micro-algae, its food. Irritated by the foreign substance, sand grains in its system, a mussel tries to expel the grains. When unable to do so, grains get stuck between the shell and its outer tissue wall. Here, a special substance, hard and shiny, is secreted, which helps in the formation of the pearl. “We use the same body mechanism of the mussels to breed pearls,” said Verma. A pre-designed cast called nucleus is introduced between the shell and the tissue. Irritated by the foreign body, the mussel releases the special substance, which forms a coat over the nucleus. “That’s how we get designer pearls,” Verma added. After the nucleus is inserted, mussel movement is restricted so that it does not expel the nucleus in water. The mussels are put in nets and allowed to float. Una fisheries department imports nucleus from China. Nucleus is also made in Cuttack in Orissa in various shapes. Made of powdered shell mostly, each nucleus costs a little more than Rs 10. Radius Corporation Ltd, a company in Chhattisgarh, also manufactures nucleus but exports it all, Verma said. Panditji intends to use the heap of shells he bought to make medicines for bone density. He said he could produce over 2,000 pearls a year. But marketing the pearls is not organized yet. “We also need a laboratory to test and export our stuff,” Panditji said. The fisheries department has asked for a grant of Rs 18 crore from the Union agriculture ministry to make a hatchery in Una. “We want to breed males and females of the species separately under controlled temperature. People are interested because the input cost is low,” Verma said (see box). The profits are high. Verma estimated a farmer could earn a net income of Rs 9 lakh a year from an acre of pond. The prices vary according to grade. Usually, a good grade pearl costs Rs 150. “It’s a profitable business but the process is delicate and even a small change in conditions can kill mussels,” said Panditji. Existing problems are landslides and run-off from hydropo - wer projects in the state’s rivers from where mussels are sourced; a dwindling fish population and migratory birds.

Mussels breed in large numbers in the still waters of the Pong dam reservoir, 82 km from Una. “The migratory bird population in the reservoir has gone up. Birds such as cormorants and herons find it easy to fish in the still waters. With fish catch going down, the birds prey on mussels,” said Verma. Besides, mussels need fish to breed. The mussles release fertilized eggs into the water, which fish consume. The eggs gain nourishment in the fish for about two months after which fish release them back in the water, in the form of a small shell. Thereafter, the shell lives on the floor of shallow waters, Verma said and added that breeding more fish was a possible solution. The season for migratory birds has begun; so has the pearl culture season. October offers the optimal temperature for inserting nucleus into the mussels. In summers, high temperatures kill mussels and during monsoon, they secrete a viscous fluid, which might eject the nucleus. The fisheries department, for now, is trying to ensure steady supply of mussels to farmers who are busy training and making the most of October. So is Panditji, now 76. As he awaits subsidy for his check dam, he is chalking out a marketing plan for his pearls.