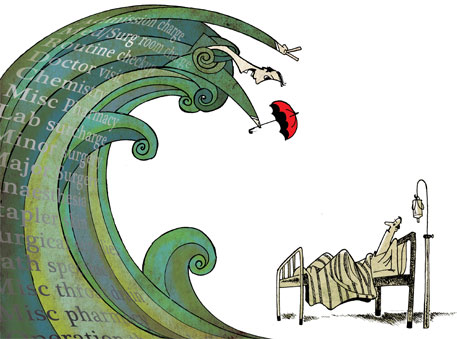 The initial euphoria around the proposed national health policy seems to be fading ever since the document was placed in the public domain for comments. The draft National Health Policy, 2015, (NHP 2015) is being introduced 13 years after the last policy was drafted.

The primary aim of the policy is to strengthen and prioritise the role of the government in shaping the healthcare system. The draft policy also assures improving health status of the population, reducing out-of-pocket expenditure on healthcare, and ensuring universal availability of free, comprehensive primary healthcare services, including essential drugs and diagnostics. It also proposes to ensure access to affordable secondary and tertiary care services. The draft is open for comments and suggestions till February 28. But public health experts have already pointed out a multitude of problems with the document.

The policy draft extensively talks about the role of private healthcare sector in providing care. The draft has a bias towards purchasing services from private players. It says the goal of the policy is towards “universalisation” of health coverage but promises secondary and tertiary healthcare services through a combination of public hospitals and strategic purchasing of services from the private health sector. The document further recommends contracting out services such as ambulance, imaging and diagnostics and non-medical services such as catering and laundry to the private sector.

It even extols the contribution of the private health sector, which is expanding at a compound annual growth rate of 15 per cent and calls it a positive trend.

Public health experts, however, differ. Amit Sengupta, convener of Jan Swasthya Abhiyan (JSA), a nation-wide campaign for health issues, says the draft does not look into the reasons behind this rapid growth and presumes that this is a natural process. “Such an understanding is not borne out by global evidence. In fact, existence of a strong and growing private sector has a perverse impact on the public sector as it draws away human and financial resources,” Sengupta says.

While the document acknowledges the government’s role in financing healthcare services, it proposes to limit its role from being a provider of care services to a “purchaser” of services. Experts allege that through such provisions the government is creating an environment which will lead to further privatisation of the health sector.

“The policy makers do not see any contradiction between privatisation and strong public health system,” rues Vandana Prasad, founding member and national convener of the Public Health Resource Network, a network of public health practitioners in Delhi. The policy seems to promote competition between public and private facilities, unmindful of the fact that public hospitals have to deal with health emergencies, legal duties and many of them are involved in teaching.

The draft policy spells out ways to monitor public healthcare facilities to ensure the quality of services they provide, but remains silent on regulating the private sector. In fact, it includes the Clinical Establishments Act (CEA) of 2012, which sought small and big clinical establishments to abide by standard treatment guidelines, in the list of laws to be reviewed (see ‘Flawed legislation’, Down To Earth, December 16-31, 2013).

Private players have been opposing the law since it came into force, says Abhay Shukla from Support for Advocacy and Training to Health Initiatives, Maharashtra chapter of JSA. “In the absence of such regulations on the private sector, the public health system will worsen,” says T Sundararaman, former executive director of the National Health System Resource Centre, set up under the National Rural Health Mission of the Centre.

For strengthening the healthcare system, NHP proposes measures that would require additional resources, including provision of free medicines and diagnostics in public facilities, enhanced staffing, new infrastructure and new medical colleges. However, it does not set a time-bound target, nor does it allocate budget towards achieving these goals.

Though the document focuses on purchasing services from private players, it does not talk about increasing public health expenditure. For years, health experts have been suggesting an increase in government spending on healthcare from a dismal 1.04 per cent of the GDP (Rs 957 per capita), one of the lowest in the world, to 4-5 per cent of the GDP. Yet the draft policy is reluctant to commit even to a target of 2.5 per cent of the GDP. “At current prices, a target of 2.5 per cent of GDP translates to Rs 3,800 per capita, representing an almost four-fold increase in five years. Thus a longer time frame may be appropriate to reach this modest target,” is all that the draft policy states.

“How can the government make the healthcare system robust without significantly increasing the expenditure on health,” asks Vandana Prasad. Earlier, there was some momentum and everyone seemed to agree about increasing the public money, but now it is lost. If one looks at the NHP document in this light, it is dangerous, she adds.

Lack of financial commitment also suggests that the government is not serious about making the public health system robust in near future. The draft does not seem to have any long-term vision either. This might be the reason that while the document boasts about looking beyond maternal health, it does not indicate its goal, says N Sarojini from Sama, a resource group for women and health in Delhi. Similarly, while the draft talks about providing free medicines, it does not lay down a plan for this.

The draft policy for the first time advocates making health a fundamental right under the Constitution, similar to education. But it may be just hollow words. According to the policy document, the Centre will enact a National Health Rights Act, which will ensure health as a fundamental right, only on the “request of three or more states”. But there is a catch. Since only those states which can spend Rs 3,800 per capita on public health can deliver the rights, the draft policy makes it voluntary for states to adopt the Act.

Such contradiction in understanding is not due to lack of awareness. An expert close to formulation of the draft policy says every word in the draft NHP 2015 has been put in after due deliberations and consultations with the states and private players.

Though private industry had its say in drafting the policy, even they are worried. President of Indian Medical Association (IMA), A Marthanda Pillai, fears that a policy favouring corporate hospitals will eventually affect health services in remote areas.

Corporate hospitals are roping in small doctors who were critical in providing health services in remote areas, he adds.

The National Human Rights Commission’s (NHRC’s) core group on health has also expressed concern over the policy text. It recently reviewed the draft NHP 2015 and said that rights perspective is missing from the draft. Though the public health system needs to be made accountable and participatory, NHP 2015 draft does not talk about community action. The NHRC group also said that public-centred universal health care found no mention in the draft, and added that policy makers should look into national action plan on health prepared by the NHRC in collaboration with JSA and the Ministry of Health and Family Welfare.