Karnataka gets jitters as Goa clamps down 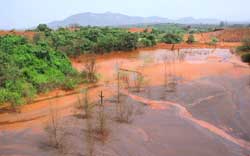 Whereas a sense of jubilation is palpable in Goa, tension is rising in neighbouring Belgaum district of Karnataka. The responses are divergent but their source is one: sponge iron plants.

The Goa government recently decided not to sanction any more sponge iron plants in the state. The units are extremely polluting and fall under the red category of industries. Following the decision, a state-level high-powered co-ordination committee that clears industrial projects, has rejected Mormugao Sponge Pvt Ltd's proposal to set up a plant in Sanguem taluka.

Goa's decision is making the industry turn to Karnataka, which has good quality iron ore mines. The Karnataka government is also reportedly welcoming the industry. A plant with a capacity of 60,000 tonnes per annum of the Goa-based Kundil Sponge Iron Ltd is nearing completion in Londa town near Belgaum. But the people of Karnataka are apprehensive.

"We have been supporting villagers of Sanguem taluka in Goa in their fight against these plants. No doubt we are happy that no more plants will be sanctioned there, but it is extremely worrisome that the same are being welcomed by our own state government," says Shrihari Kugaji of a Belgaum-based ngo, Paryavarni.

Karnataka officials seem unconcerned. "We know that local environmentalists are opposing the upcoming Kundil plant. But it is also a question of development that needs to be balanced with environmental protection. Maybe it would be beneficial if such polluting plants come up in designated industrial areas but then that is the decision of the state-level single window clearance agency," says Shalini Rajneesh, district collector, Belgaum.

Over the last couple of months, Down To Earth received numerous letters from people in Goa and Belgaum relentlessly fighting a war against these polluting units, and decided to follow the 'black' trail.

In a hurry to 'develop' Goa, its government cleared within a short span -- 2002-2005 -- five sponge iron plants with capacities between 100 tonnes per day (tpd) to 200 tpd. No siting guidelines were followed while constructing these plants, four of which have come up in the rich agriculture/orchard belt of Sanguem. The modus operandi was simple: low-capacity plants strategically located in remote villages with no public hearing provision to bother about.

But about two years back, residents of Santona village in Sanguem taluka decided to fight against the 100 tpd plant of Jain Udyog, then under construction. Despite the protests (a legal case is still on), the plant has not only been constructed but is operational.

In early 2003, Jain Udyog applied to the co-ordination committee to set up the plant in Santona village. The committee cleared the project on May 12, 2003, subject to approval from gspcb, and the town and country planning department (tcpd). The villagers immediately sent written objections to the then chief minister Manohar Parrikar and government departments concerned. On November 20, 2003, a gspcb team visited the village and said "the proposed site... is a coconut grove and bounded... by the Kalay River ... It is anticipated that the River Kalay will get polluted".It also noted that the company had already started foundation work without getting the necessary clearances. The proposal was struck down.


But in less than a month, things changed. Another gspcb team visited the site on December 16, which, allege villagers, was at the behest of the then industries minister who wanted the project cleared. In early 2004, tcpd issued a public notice in a newspaper saying out of the 111,339 square metre 'orchard' area in Santona village, it planned to convert 25,000 sq m into 'industrial' area for the plant. The villagers submitted detailed objections along with a plea for personal hearing. But to their utter surprise, on May 11, the then chief town planner, B K Sutaira, gave approval for land conversion. On May 21, gspcb also gave its consent subject to certain conditions. The plant was constructed and started functioning in early 2005 amid widespread public protest.

"This plant runs 24 hours a day belching out black smoke. My entire house gets filled with soot, making it difficult for us to breathe. The stench from the unit makes us throw up at times," says Panduranga B Naik, the 44-year-old panchayat chief of Santona village, whose house is only a few metres away from the plant. By the time Naik finished talking, this correspondent, too, was all covered in a layer of soot.

The wells are affected by the soot and villagers complain that stomach ailments have become common. Agriculture, too, is getting affected. "Soot settles on the leaves affecting growth of plants," says Laxman M Nandrekar, whose farm abuts the plant. Villagers filed a public interest petition in the Bombay High Court's Panjim bench at Goa in February last year, but the problem persists. In its interim order dated May 3, 2005, the court directed gspcb to conduct air and water monitoring. "But of the 28 days when samples were collected, the plant operated only for seven days," says a villager.

At present, Santona village is the only one openly fighting against these plants. And for a good reason, as two more plants -- of Goa Sponge and Power Ltd and Shraddha Ispat Pvt Ltd -- fall within a 5 km radius from it. As for Jain Udyog, land use was changed (50,000 sq m each of 'partly orchard' land and 'natural cover' land) to accommodate the other two units, too.

All the units are just a stone's throw from a reserve forest and the Netravali Wildlife Sanctuary. "There are no siting guidelines for sponge iron plants. We should be able to finalise them in a few months," explains gspcb member secretary Amar K Vazirani.

Most plants are located next to rivers, when according to gspcb, the plants should neither use river water nor discharge effluent into it. The plants are water guzzlers, and even if they continue using groundwater, they could cause an acute drinking water shortage, says gspcb chairperson L U Joshi.


Unlike Santona village, the town of Londa in Khanapur taluka of Belgaum is yet to gauge the impact of the upcoming Kundil plant. The turn of events for the Kundil plant is almost the same as for the Jain Udyog plant in Goa.

Following a site visit on November 8, 2004, kspcb reported that the area "is surrounded by forest and location is not meeting with siting guidelines w.r.t (with respect to) railway track and (Phandari) river." It also found some data furnished by the company was faulty. For instance, the unit gave two figures for water consumption -- 700,000 litres per day (lpd) and 595,000 lpd -- at different places in its application form. kspcb recommended that the company should seek clearance from the Union government, too.

On January 4, 2005, the consent committee meeting observed that "the location is in a biodiversity hot spot in highly sensitive Western Ghat". But, on January 13, the committee cleared the project. kspcb gave its consent for establishment (cfe) on January 28, 2005 on the condition that approval of the environment clearance committee (ecc) of the department of forest, ecology and environment was obtained.

But without bothering to get ecc clearance , Kundil went ahead with construction. Huge protests were organised by local ngos, following which a kspcb team again inspected the site on June 22, 2005. On June 29, kspcb issued a show-cause notice to the company's director. On July 2, 2005, the deputy commissioner, Belgaum, issued a showcause notice to the company directing it to stop construction. Towards the end of July, kspcb also filed a criminal complaint against the company with the judicial magistrate, Khanapur.

While the series of notices were being issued, ecc hurriedly gave clearance to Kundil on August 5, 2005, allegedly to cover up the illegalities. But experts say the case against the company still holds water because it violated the kspcb clearance condition and a delayed ecc clearance does not absolve it of the illegalities. M K Prabhudev, environmental officer at kspcb's regional office at Belgaum, refused to comment.

Says Ramesh Singhanath, ex-chairperson of Londa gram panchayat, "The company has misguided us. It promised jobs but never informed us about the pollution issues. No public hearing was organised. Kundil has finished 80 per cent construction without getting construction permission from the panchayat. We are facing an acute drinking water crisis -- receiving water for just one to two hours every four days from the panchayat borewell. The company has started drawing groundwater from its own borewells. The situation will worsen."

Karnataka is emerging as a new haven for sponge iron plants. But in trying to encourage development, must it repeat Goa's mistakes?